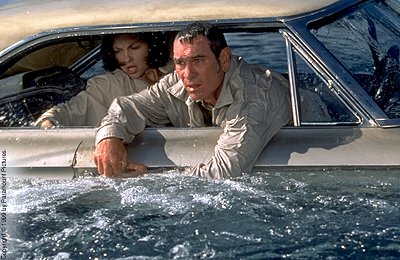 It wouldn’t be fair to say that the trailers and TV ads for the staggeringly preposterous new thriller Double Jeopardy give away every surprise in the film. After all, that would imply that there actually are some surprises to give away, and clearly that’s not the case. Well, maybe there is one: the director’s credit for Bruce Beresford, previously best known for well-meaning middlebrow dramas like Crimes of the Heart and Driving Miss Daisy. His lackadaisical touch is all wrong for this material, but no matter. Hitchcock himself would have been hard pressed to wring any suspense out of the lumpy screenplay by David Weisberg and Douglas Cook (The Rock). In fact, this bone-weary material would barely make for a passable episode of Diagnosis: Murder.

Libby Parsons (Ashley Judd) has it all – a successful husband, an adorable son and a lake house the size of the Louvre. That is, until she wakes up on her brand new sailboat, artfully spattered with blood, crying out her missing husband’s name. She finds a bloody knife on the deck and picks it up just in time for the lights of an approaching Coast Guard vessel to catch her. This early in the movie, that seems a contrivance. By the end, it seems perfectly reasonable. The sheer magnitude of coincidental happenstance is so overwhelming that one can only assume the story takes place in a parallel universe where everyone has remarkable timing.

Libby is convicted of murdering her husband Nick (Bruce Greenwood) and leaves her son Matty in the care of her friend Angela (Annabeth Gish). When Angela disappears, Libby tracks her by phone to San Francisco, calling just in time to overhear her supposedly dead husband returning home from work. Libby spends the next six years lifting weights and running in the rain. A fellow inmate and former lawyer informs her that upon her release, she is free to find her husband and kill him, since she can’t be convicted of the same crime twice. As far as we know, Libby never bothers to verify this absurd claim, but given the number of laws she breaks throughout the rest of the picture, the central gimmick of the movie proves to be utterly weightless.

Somewhere along the way Tommy Lee Jones enters the story as Libby’s parole officer. Jones looks very, very tired; he’s coasting on fumes here and seems barely interested in anything that’s happening. It’s always discouraging to watch a decent actor punch the clock. As the plot grinds through its increasingly unlikely machinations, he looks like he’d give anything to be home watching the game and drinking a few beers. Judd tries a little harder, but to no avail. She has scarcely a convincing moment, which means she’s in the right movie. Consider a scene in a library, where a young stud introduces Libby to the wonders of the Internet. He asks her out for a drink; she says she’ll have to check with her parole officer since she just got out of prison for murdering her husband. The stud swallows hard and stammers, "Uh…I just remembered I have this appointment…" The peals of laughter in the theater were somewhat less than deafening.

A few cheap thrills might have been squeezed out of Double Jeopardy with some tighter direction, but Beresford’s slack pacing allows too much time for the audience to think – a deadly mistake in such a brainless enterprise. He makes a few token stabs at grittiness – the correctional facility Libby serves her time in resembles a Third World internment camp, and her halfway house is appropriately scuzzy – but he never manages to conjure up the crucial sense of fate tightening around Libby. And once she is set on her course of vengeance, she might as well be preparing for a day of grocery shopping. There’s no transformation, no down-and-dirty vicarious charge. By the time she catches up with Nick in New Orleans, where he has assumed a new identity, she hardly seems like a woman whose entire life has been snatched out from under her. The moment we’ve supposedly been waiting for turns out to be no moment at all; instead, she asks him to meet her the next day and deliver her son. Whatever happened to double jeopardy?

A handful of half-hearted attempts at suspense remain, including a rainy chase down Bourbon street in which Libby conveniently has the only red umbrella, and a would-be spooky interlude in a cemetery, but by this point the filmmakers are just killing time. Double Jeopardy is a cable-ready movie if there ever was one, custom made to clutter the HBO schedule for many years to come. It’s proof that in Hollywood, no one can be convicted of committing the same crime over and over again.