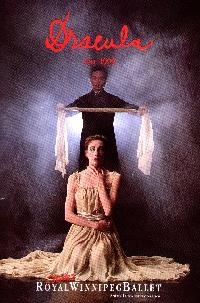 The most cursory glance at Dracula &#150; Pages from a Virgin&#146;s Diary screams out that it is a Guy Maddin film. His fifth feature does not depart from his usual modus operandi &#150; the loving, nostalgic caricature of old film styles and genres while adding his own humorous wit and a touch of surrealism. Here, he replicates a black and white silent picture, more F.W. Murnau Nosferatu than Bela Legosi Dracula, except color and sound occasionally intrude and it is all brilliantly set to selections from Gustav Mahler&#146;s First, Second, and Ninth Symphonies. And there&#146;s ballet.

Dracula began as Mark Godden&#146;s dance piece, a part of the Royal Winnipeg Ballet&#146;s regular repertoire. Vonnie Von Helmolt commissioned Maddin to film it for Canadian television. Maddin, who knew very little about dance, transformed it by paring down the ballet while adding more narrative and making it more faithful to Bram Stoker&#146;s original story. The Winnipeg Ballet dancers turn out to be surprisingly compelling film actors.

While not getting a chance to display much emotional range as Dracula, Zhang Wei-Qiang dances with grace and power. His imposing stoic presence would be fear-inducing even were he not saddled with the voluminous cape and fangs. David Moroni as Van Helsing has no trouble furnishing the delirious glee of a mad scientist, no doubt a subversive touch added by Maddin. Tara Birtwhistle shows impressive versatility as actor and dancer. As the undead Lucy, trapped by a barrage of crosses projected by Van Helsing and his men, she spectacularly transforms from cornered beast to hurt innocent, and when unable to elicit sympathy from her pursuers, she changes again into defiant vamp.

The familiar story is separated into two parts. The first is Dracula seducing Lucy Westenra, which leads to her transformation into one of his minions. The second has the vampire pursue Lucy&#146;s cousin, Mina (CindyMarie Small), who is about to marry Jonathan Harker (Johnny Wright). Throughout both stories, Dr. Van Helsing tries to chase down the evil fiend. Harker&#146;s trip to Dracula&#146;s castle and his capture there acts as the extensive prologue to many a Dracula film. It opens the second part, but Maddin trumps expectations by turning it into an outrageous one-minute montage.

Absurdist comedy is part of Maddin&#146;s regular routine. Here, Lucy&#146;s mom resides in a glass case for no apparent reason. When Lucy falls ill from Dracula&#146;s bite, Van Helsing&#146;s examination is bizarrely intrusive. He crassly spreads her legs for a voyeuristic view and gauchely gropes at her chest. In one of the rare instances in which Maddin uses sound in the movie, it comes in to magnify a bone-crunching decapitation with a shovel. The elderly Van Helsing incongruously takes pride in the grisly act. In this brief moment, Dracula hints at becoming one of Sam Raimi&#146;s Evil Dead films.

Some of the funniest comic sequences are also the most thematically pointed. Lucy has a ridiculous nightmare about immigrants entering the country. This irrational xenophobia, possessed not only by Lucy but by Van Helsing and his men, creates an ambivalence in rooting for the xenophobes against the vampire. Adding to that, the sheer majesty of Dracula is darkly beautiful while Van Helsing and his men are thuggish, plain, and ugly. Even when partaking of the blood of his female victims, the poised vampire treats them with delicacy. Van Helsing&#146;s men, on the other hand, are silly, self-absorbed suitors.

Dracula&#145;s being a silent film requires Maddin to understand the efficiency of gestures like a mime. He clearly does, always choosing the right movements for his actors to communicate maximum clarity and effect. Despite being mostly shot on Super-8 and video, the movie only has a slight degradation in resolution and it looks luminous with its high contrast lighting. Deco Dawson&#146;s editing seamlessly meshes the narrative with the dance and coherently organizes all the complex choreography in what must have been a monumental task.

The use of Mahler here is sublime and Mahler in the movies has only been matched by Tampopo&#146;s handling of his Fifth Symphony. Dracula has less of the Fritz Lang in Maddin&#146;s bravura short, Heart of the World, but German Expressionism is still in the mix along with the quick, whirling takes of early Russian montage. To some, Maddin&#146;s filmmaking might be a one-joke fixation, but it is a tremendous joke, and each film is brings on a new, fascinating, if not always successful, variation. Dracula, however, is a triumph on every level and Maddin&#146;s most accomplished film yet.