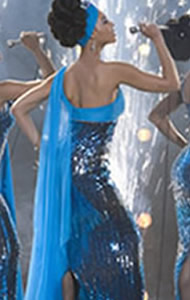 As an old rock and roller who first listened to the Supremes and the Four Seasons on a little AM radio over forty years ago, it is a surprise and pleasure for me to see these groups now in the Broadway and Hollywood spotlight.

With rock and roll music being celebrated, mythologized, and yes, packaged, nationwide to general movie and musical audiences, it is hard to conceive that it began in the 1950’s with African American ghetto kids singing on street corners and older rhythm and blues singers singing at small African American clubs.

It certainly wasn’t music my parents understood or accepted. I remember my father, in a fit of temper from hearing “that jungle music,” jumping on our hi-fi set and breaking a prized record by Clyde McPhatter and the Drifters. So, when my parents thought I was doing homework or sleeping in my room, I listened to rock and roll on the radio, to DJ greats like Harlem’s WWRL’s Jocko and Dr. Jive and WINS’ Alan Freed. This was the wonderful era of Doo Wop groups who sang only for their own insular audience.

The Supremes and the Four Seasons appeared on the music scene several years later, when African American style rock and roll was spreading among teenagers across the country. Big money could be made if the sound was moderated from street corner Rock and Roll to a Pop sound that could appeal to a mass White audience.

Dreamgirls was a hit musical in the early 1980’s. In the show, the three fictional members of the African American girl group are from Harlem; in the movie, they’re from Detroit and more closely resemble the Supremes with their symbiotic relationship with the head of an African American record company that looks a lot like Motown.

Both the Jersey Boys and the Dreamgirls start out in their early teens in the late 50’s and modify their image to become Pop singers who can sell records. The Jersey Boys have to overcome and grow beyond their rough gangster background and persona, while the Dreamgirls and their music have to become less soulful, more polished and mainstream.

In both Jersey Boys and Dreamgirls, we watch not only the rise of rock and roll stars, but we also watch kids grow up. We see their modest beginnings, their rise to fame; we watch them cope with success and we witness their personal demons. Interestingly, in both productions, none of the singers evolve much as individuals over the course of their careers. Their basic personalities and all their insecurities, flaws and failings do not change, but simply mature. It is the elemental nature of their flaws and failings and their inability to conquer them that give the two stories, but especially Dreamgirls, a hint of Shakespearean tragedy.

Because it was originally created as a musical show, and then enhanced for the film, Dreamgirls has much more fleshed-out characters and a more cohesive and dramatic story line than Jersey Boys. There were no surprises or nuances in the Dreamgirls plot, but it was absorbing.

Dreamgirls is a film with big name stars, including Beyonce Knowles, Jamie Foxx, Eddie Murphy and Danny Glover, who give first-rate performances, especially Eddie Murphy. Jennifer Hudson, an American Idol finalist, but a contest loser, stole this, her first, movie with her soulful six-octave voice and fine acting. The movie audience clapped and cheered for her song, And I Am Telling You I’m Not Going.

Many of the songs in Dreamgirls are from the musical and some are new. But they were terrific and some were quite moving. The songs were much better integrated into the plot than those of Jersey Boys, having been written especially for it. But unlike Jersey Boys, in Dreamgirls,we are not hearing the simpler, genuine hits we knew and loved. Dreamgirls has great production values, costumes, sets, makeup and sound. And all this glitz is integral to the appeal of the film.

Jersey Boys, on the other hand, largely consists of four unknown actors on a bare two-story set and is a bit more like a revue or concert than a well-made play. But unlike Dreamgirls, it is the group’s real-life history accompanied by all their familiar hits. It is a very interesting history, and one with which I had been unfamiliar.

I saw Jersey Boys in San Francisco and had a really good time. The acting, singing and staging were excellent. The Four Seasons’ music, which had never moved me, sounded wonderful in the theater with modern acoustics and great singers. I now realize that part of my prior indifference to the Four Seasons was that on my little radio, their falsetto and harmonics sounded tinny.

The second act, which was more dramatic, was more satisfying theater than the first act, but what can I say…all the music in Jersey Boys was great. For all you old American Bandstand fans: it’s really good to dance to; I’ll give it a 90. I mouthed the words to all the songs, and sang a bit, too. The San Francisco audience was not old enough to all be original fans of the Four Season; yet, their applause and bravos were long and heartfelt.

So why are the lives of these old rock and roll groups being resurrected now? It’s not just the music, although that may be a good enough reason. And it can’t just be to capitalize on the nostalgia effect, since the original rock and rollers are too old now to be the target audience. No, it’s that these life stories have universal appeal. They are inspirational tales of unlikely climbs to success with all its heady glamour. But also they are tales of friendship and betrayal, the tragedy of young talent gone astray, and the pain of love and loss. There is nothing subtle, sophisticated or new about either Dreamgirls or Jersey Boys, but there is heart.

To cut to the chase…Jersey Boys is a lively and enjoyable night at the theater, with great music and a plot that doesn’t always connect with the music, but it doesn’t have to . . . Dreamgirls is a splashy film with a great cast, strong performances, terrific music and an engrossing, though more familiar, story.