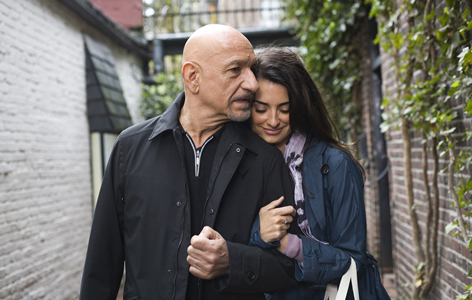 Elegy is a film adaptation of Philip Roth’s short novel The Dying Animal, with all the juice taken out of it. It feels like an anesthetized version, a born-again Philip Roth. The cynical bite, the hard edge and abiding pessimism that make Roth who he is, does not come across in this film version. By the film’s end, Elegy has transformed itself into a sentimental love story, another Hollywood-delivered message declaring the ultimate rightness of romantic love between a 65-year-old man and a woman who is decades younger.

The film does, at least in the beginning, try to remain faithful to the novel and to its classic Rothian character, the cynical and self-centered intellectual David Kepesh, played by Ben Kingsley. Kepesh—who has appeared in two other novels by Roth, The Breast and Professor of Desire—embodies many of Roth’s obsessions: the male sex drive (sexual hunger in men is a major force in Roth’s novels); his objectification of women (an adjunct of Roth’s searing analysis of the male sexual psyche is a rather egocentric treatment of female desire, which some women, and men, find offensive; others appreciate Roth’s refusal to idealize sex); and a self-awareness that often tips into self-loathing. David Kepesh is a cad, really, but still seductive, still able to get laid, due to a well-formed consciousness, a self-possessed manner, and—particularly advantageous in attracting women—noticeable success as a celebrity of sorts. In the film, we first see David Kepesh being interviewed by Charlie Rose, a conversation that leaves no doubt that even in his sixties, Mr. Kepesh is still at the top of his game, and still has sex at the forefront of this mind.

The film veers off from the novel in some fundamental, and ultimately catastrophic, ways. One of them has to do with the character of Consuela, David Kepesh’s latest conquest, a young student whose physical beauty ensnares him in lust’s clutches, and whose extreme youth constantly reminds him of his own advancing age. In the novel, Consuela is only twenty-four, still young enough to succumb to the excitement of fierce abandon and become a willing participant in Kepesh’s carnal acts. As played by Penelope Cruz, whose exquisite beauty is still transcendent at thirty-four, Consuela acts more cautious, less malleable, and even ingratiatingly polite. What little sex there is in the movie is as subdued as Miss Cruz’s portrayal of Consuela; there’s something in her face and manner that makes a deeper relationship between the two seem plausible, even inevitable. That, ironically enough, is part of the problem. To adhere to the novel’s intention, the idea of long-term commitment should not seem particularly welcome. The film ultimately forces the carnal relationship into a romance, and it mutates the raw sex that is at the novel’s core into the more sanitized act of lovemaking.

And then there’s the transformation in David Kepesh that occurs about two-thirds into the movie. It turns out there’s something soft about Kepesh, but it’s not his prick. For someone who long ago made a decision to leave his marriage and its cage of monogamy, Kepesh suddenly gets sentimental in his old age. When Consuela finally breaks off their relationship because he can’t “commit,” he can’t stop thinking about her. He actually mopes. Reinforced by Nicholas Meyer’s emotionally overwrought screenplay and director Isabel Coixet’s somber, lyrical direction, Kinsgley turns Kepesh into a dewy-eyed romantic underneath the tough guy exterior.

Not only that, but as much as Kepesh despairs about getting old (“the dying animal”), you never quite get a sense of why his aging is nagging at him. At 65, Ben Kingsley plays Kepesh with little trace of the physical limitations of age; there is nothing in his demeanor that suggests diminished prowess. Kingsley is in great shape, and with that shaved head and muscular torso, he looks quite virile. His is nothing like Frank Langella’s moving performance in last year’s Starting Out In The Evening that showed us old age in a more realistic light, including sex with a young woman as a voyeuristic activity at best. Granted, Langella played a much more cerebral man who has already passed seventy, when sexual desire is more in the head than in the fly. Part of Elegy’s appeal is watching a man still successfully engaging in sex over sixty. We get a slap in the face about the ugly business of old age only when Kepesh’s best friend, a wanton poet exuberantly played by Dennis Hopper, has a stroke. It’s a jarring episode in a movie primarily concerned with Kepesh’s sexual entanglements. Kingsley not only gets to bed Penelope Cruz; he’s also able to keep Patricia Clarkson on the side. Isn’t that every man’s dream of life after sixty? No wonder the elder statesmen of film criticism loved this film.

There’s an interesting discussion in the movie about the inherent inequality between men and women on the subject of aging and sex. Miss Clarkson’s character confides to Kepesh, her casual lover, that she is not getting the looks from men that she used to, and she rather plaintively predicts a near future where she can no longer attract men for sex. Though the discussion ends there, the harsh reality remains. As we age, women have it much worse than men. Feminine beauty is what attracts men; it is the physical perfection of Consuela’s body that has captured Kepesh’s attention; that is her power over him. How much longer does a 48-year-old woman have to compete with that? One wonders what the 65-year-old Kepesh must be thinking when his aging lover confides her fears. Does he even care? Unfortunately, young women only exacerbate the inequality by finding such nonchalance attractive, coupled with the power they gain through men’s lustful reverence of their youthful bodies.

Sex is not a moral act, but a physical one that is driven by instinct, and power; it’s not easily ruled by principles of fairness or equality, or by institutions such as marriage and ideals based on sentiment. This is Roth’s male-centered message in The Dying Animal. And Elegy is Isabel Coixet’s female-centered riposte. Ben Kingsley is the aging bull who has spent a lifetime proclaiming the absurdity of making a commitment to one woman, and Penelope Cruz is the one woman who can bring him to his knees, or at least, to a hospital bed with the assurance that he will always be there for her. For Coixet, it is sentiment that prevails. This may seem a victory for the feminine psyche, but it doesn’t feel that way to me. It feels like a cover-up, something Roth has spent his writing life trying to avoid.