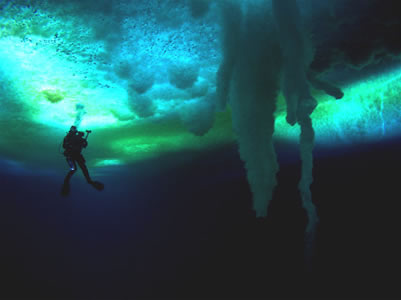 A Documentary by Werner Herzog

When the National Science Foundation allowed filmmaker Werner Herzog to film in Antarctica during its “austral summer” when the continent is warm enough for human travel, they must have known from his vast documentary output that they would not end up with an ordinary nature lovers’ documentary about the lives of penguins or Weddell seals, or even a heartfelt attempt to raise awareness of the fate of global warming on the ice continent. “My questions about Nature are different,” Herzog intones in a now often mimicked Bavarian drone, warning us that we are about to embark on another typically Herzogean metaphysical journey into the relationship between Man and Nature, one whose peculiar form of enquiry is evident early on, as when he ponders one of the great mysteries of evolution—why the chimpanzee never attempted to exploit inferior creatures. Seeing an illustration of a chimp riding one of the dumber animals like a cowboy on a horse brought the first of many laughs from the audience I watched Encounters at the End of the World with.

In fact, this film is a particularly entertaining venture into Herzog’s mental landscape. It’s full of outlandish overstatements, humorous declarations, and even though Herzog’s pessimistic vision of our future is never more apparent, it somehow never quite dampens his German Romanticist spirit. Herzog’s reverence for the grandiose beauty and power of nature is still there, as well as his odd mix of disdain and respect for man’s impulse to explore and harness that power, all tempered by a cynic’s belief that such endeavors are humanity’s ultimate folly. Encounters at the End of the World is Herzog at his best—a cynic with a big heart, and a nasty wit.

In the film’s opening shots, Herzog also reveals his affinity for the mystical. Images from an undersea video taken by his friend Henry Kaiser (who also produced the film and composed the seductively ethereal music along with David Findley) are set to what sounds like monks singing vespers. These underwater scenes are so hauntingly beautiful, and the music so contemplative, that one’s thoughts easily enter the mystical realm, where the nature of existence is shrouded in mystery. Here, an environment that is uninhabitable to man is yet home to all sorts of other life forms, like the strange white creatures that scuttle across its floor, looking like ghostly spiders with starfish-like tendrils. In the face of all this difference, it’s impossible not to want to float around in masks and wet suits and look in wonder.

These very images, Herzog explains in voice-over, are what drew him to Antarctica in the first place. But before we get too misty-eyed by the gloriousness of Nature, Herzog promptly brings us back to Earth, when he gives us his initial reaction upon his arrival at McMurdo Station, the base where over a thousand people live and work, the lifeline to the rest of the continent. “It’s like a mining town,” his voice-over whines, “with noisy construction sites.” Where is the otherworldly quality he had seen in the underwater sea videos that lured him there? Man has settled in, and it’s not a pretty sight.

Man versus Nature is a constant theme in Herzog’s work, but even though he seems to ridicule man’s ineffectual weakness in his confrontations with Nature, he nevertheless has a respect for those “professional dreamers” who seek to unlock Nature’s secrets, or who are drawn as explorers to its harshest elements. Almost everyone he encounters at McMurdo, and the satellite scientific outposts he visits beyond, is one of these professional dreamers for whom Antarctica represents, in a way, the end of the line, the final frontier.

The men and women Herzog meets form a meandering stream of dream-like encounters, their stories so odd thy feel at times like made-up stories. (Who knows, maybe some of them are? Herzog has a reputation for staging scenes, and even scripting the responses of the people he interviews.) There is the nerdy glaciologist who sits at his computer studying the changes in Iceberg-15, whose apparent constancy hides a “dynamic environment”—which, in recent decades, means a lot of melting and breaking apart. There is the dapper geologist who studies Mt. Erebus, a volcano that erupted so violently 74,000 years ago that it caused a major shift in human habitat—another era of global warming. Or the physicist studying the neutrino in Antarctica’s rarefied atmosphere. He calls it “the most ridiculous of subatomic particles” whose existence has literally no affect on our universe, which leads him to wonder if there is another universe out there in which it does. And there are the marine biologists who have just discovered three new species of bacteria in the Ross Sea, and who describe the miniaturized world of these single-cell creatures as one of violence and murder. With every encounter, we see the image of the gloriousness of Nature getting muddied by counter images of destruction and violence and nonsensical activity. For Herzog, the contradiction is intrinsic, and has always fascinated him. In a speech given in 1999 that is now widely known as his Minnesota Declaration, he states: “Life in the oceans must be sheer hell. A vast, merciless hell of permanent and immediate danger.” (The speech can be found at http://www.wernerherzog.com/main/index.htm)

Landscapes have always been an important element in Herzog’s work, especially those landscapes—the ocean, the jungle, the desert, the mountains—where Nature is less amenable to man’s instinctive urge to conquer it for his own uses. It provides a more adequate portrayal of Herzog’s fatalistic philosophy, that man is ultimately powerless against Nature, that Nature will win out; it is stronger, more fierce, than us. We can never claim mastery of it, only watch in awe at its own changeability. This was the focus of Grizzly Man, and Fitzcarraldo. It is also the subject of Burden of Dreams, Les Blank’s documentary on the making of Fitzcarraldo, in which Herzog talks with some bitterness of “the obscenity” of nature, its violent tendencies and its lack of harmony. It recalls the underlying absurdity of the grizzly man’s obsessive love of the enormous and grand creatures that ended up ripping him apart and eating him alive. Nature may be glorious, but it doesn’t care a fig about man.

Werner Herzog’s fatalism takes his imagination to the end of humanity; his grim assessment of our future, he tells us quite matter-of-factly, is also the consensus of the scientific community, “Many of them agree that the end of human life is assured.” I swallowed hard when I heard that. But even though Herzog’s declaration, devoid of sentimentality, may draw the breath away, it doesn’t necessarily leave one in despair at our fate. After all, nature will continue, in some other form. Herzog even imagines aliens coming to Earth in the future and discovering the time capsule buried deep in the ice underneath McMurdo Station, a collection of weird relics that McMurdo patrons have amassed probably out of boredom and other side effects of cabin fever more than anything. One is a frozen sturgeon, and Herzog imagines the aliens mistaking it for a religious symbol of some sort. The image gets another laugh, and the irony somehow lightens our hearts.

Even the fate of a lone penguin, who for some reason has become disoriented and has started walking inland, away from the sea and towards certain death, strikes us with awe as much as sadness. Herzog films this penguin, Nature’s misstep, waddle off to his fate, much like the fate of man, who seems to be on a similarly fatal journey, destined to be the cause of his own destruction. But the penguin marches on oblivious, and the snow-capped mountains he is heading towards are remarkably majestic in their beauty. It is a moment tinged with mysticism, the tiny penguin heading towards the judgment day.

In another scene, Herzog is even more explicit. During an interview, one of the McMurdo workers, a forklift operator named Stefan Pashov, quotes from the philosopher and spiritual teacher Alan Watts, ”We are the witness of the universe becoming conscious of its gloriousness.” It’s a strong statement of affirmation in a film that spends a lot of time witnessing the darker aspects of both nature and humanity. It certainly helps keep despair at bay, this impulse to look beyond the end of the world.