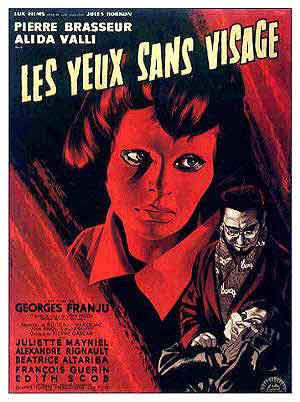 In 1949, Georges Franju directed his first film, a short documentary entitled Blood of the Beasts. A rigorous, unflinching study of a slaughterhouse shot through with echoes of both the Surrealists and the death camps, it is at once hypnotically beautiful and close to unwatchable. A parade of animals are slaughtered and rendered before the camera, yet there’s nothing lurid about the film: Franju approaches the shocking material with clinical detachment, forgoing easy jolts in favor of clear-eyed contemplation. He respects both the animals and the butchers, framing them with crisp precision and weaving these grisly images into overwhelming, lyrical montages. This is no simple vegetarian tract.

If he’d never made another film, Franju would be remembered for his debut. Blood of the Beasts ranks among the greatest films ever made. (He’d also earn a footnote as co-founder, with Henri Langlois, of the Cinematheque Francaise, the film archive that spawned the Nouvelle Vague.) That film’s wholly original tone – its unnerving calm in the face of pain – formed the basis of his long and peculiar career, which peaked in 1959 with Eyes Without a Face, now re-released in a new print with freshly translated subtitles.

At once prescient and nostalgic, Eyes Without a Face is a modernist horror film infused with the spirit of the silent avant garde. Pierre Brasseur (Children of Paradise) plays Professeur Genessier, a plastic surgeon wracked with guilt over his role in a car accident that has left the face of his daughter Christiane (Edith Scob) "an open wound." (It’s strongly implied that his chic assistant, Louise (Alida Valli), is in fact the wife he grievously injured years before.) An expert in transplants with a cellar full of baying, injured hounds he experiments upon, he’s determined to restore Christiane’s beauty, though it means stalking and murdering beautiful young women in order to graft their faces onto his daughter’s.

Even the greatest horror films tend to devolve into camp over time; what is terrifying today is ludicrous tomorrow and the canny tricks that catch an audience unaware quickly become routine. And that campiness provides an escape clause, a means of keeping discomforting material at bay–laughing at the amateurish acting in Night of the Living Dead makes it easier to face down the images of cannibal children and heaps of burning bodies. The handful of films that haven’t lost their power – Murnau’s Nosferatu, Dreyer’s Vampyr, Bergman’s Persona – downplay histrionics in favor of creeping dread. (They’re also not so much horror movies as art films with supernatural leanings.) There’s nothing to giggle at in Persona, no silly accents or maniacal laughter; the uncanny sway of the dream images that open the film, the claustrophobic pace and the brooding silences make it impossible to keep the film at arm’s length or shake it off, even years after seeing it.

Eyes Without a Face isn’t campy; it’s also not much fun. Its echoes of Mengele and anxiety about medical advances are evocative but clumsy, stated outright in long, plodding dialogue scenes that might profit from the arch theatricality of James Whale’s Frankenstein films. There’s nothing in these scenes – more than half the film’s running time – to laugh at, but there’s also nothing engaging. They’re bits of exposition to fight through on the way to the scenes that led to the film’s reputation.

In long passages without dialogue – the film’s beginning, the abductions and especially the horrific, liberating conclusion – the film looks back to the sober horrors of Blood of the Beasts and leaps from the mundane to the nightmarish. Here, Eugen Sch�fftan’s chiaroscuro cinematography, Maurice Jarre’s jaunty waltzes, Franju’s mesmerizing rhythms and Antoine Archimbaud’s sound effects coalesce to create a matter-of-fact surrealism. In half these scenes, Louise methodically hunts for victims on the streets of Paris or disposes of their corpses. (In her pearl necklace and smart black gowns, this pretty, chipper ghoul could be Cocteau’s Death on her way to a cocktail party.)

The rest are haunted by Christiane’s masked face. A porcelain doll’s head floating above huge silken robes, the mask is set in a grimly impassive frown with only her eyes – huge, darting and always terrified – visible. It’s a disquieting, ethereal image–the film takes its name from it for good reason. Christiane is believed dead, so she can contact no one, and the miracle her father wants to perform for her is less an act of love than a means of further controlling her. She drifts through her father’s mansion, morose and begging for the release of death, occasionally wandering to the cellar to pet the dogs her father tortures or to look in on whoever he’s brought in to maim on her behalf. It’s a vision that haunts precisely because it’s at once so directly evocative (Franju makes her a doll, a mannequin, a caged bird) and so wide-ranging. As an essay on scientific ethics, Eyes Without a Face is banal. As fodder for uneasy dreams, the animal panic in Christiane’s eyes is permanently scarring.