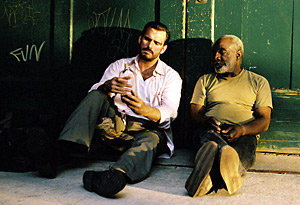 the Bukowski novel on which

the film is based

The late Charles Bukowski famously faulted the Beat writers for becoming "sell-outs" (successful), claiming for himself the status of the last real Beat, bohemian artist who remained true to his core values. Every artist, bohemian or not, ultimately seeks recognition, at least among his or her peers, and enough commercial success to continue to pursue their artistic endeavors. Bukowski seemed to seek ennoblement by living at the lowest possible margin of society. In his writing he celebrated the virtues of boozing, whoring, gambling, and getting fired from every job he was forced to take. Factotum, or "man of many jobs," describes the only sort of life possible for such a blue-collar rebel, and Factotum celebrates Bukowski&#146;s more or less autobiographical literary persona, Henry Chinaski.

Bukowski lived to see several of his novels, several volumes of his short stories and essays, and many, many volumes of his poetry published, mostly by Black Sparrow Press. Through his carefully crafted persona he nurtured an intensely loyal readership into a world-wide cult following. His fame has lived on after his death and continues to grow, especially in Europe. Factotum was Bukowski&#146;s second published novel; director Bent Hamer&#146;s Norwegian-American co-production of the film bearing the same name draws on this novel, as well as several of Bukowski&#146;s volumes of poetry. Factotum the film well represents Bukowski&#146;s style, subject matter, and spirit. Hamer retraces the narrative paths, and in much the same spirit, as the old, life-bedraggled master himself, who was fond of ruminating over the same ruminations, again and again, mesmerizing the reader in the repeated retelling of mostly the same stories.

Matt Dillon stars as Henry Chinaski (Bukowski&#146;s literary alter ego), a young and raging alcoholic writer, with impossibly high ideals and a sharp pen, not to mention an utter inability to say no to a drink, sex, or a gambling stake. In the opening vignette Chinaski finds himself dispatched to deliver ice to a dive bar in a warehouse district of an anonymous American city. As he drives out of the company lot, his truck yanks an electrical socket out of an exterior wall as he pulls away. The first order of business when delivering ice to a bar, of course, is to get a drink in himself. Soon he is exchanging wry, slow-cured blue-collar barbs with some crusty old bastard at the bar. The barfly bears a striking physical resemblance to the historical Bukowski–Bukowski making a cameo appearance by proxy from the other side of the grave is just the sort of ironic joke in which he quietly reveled.

Jan, Chinaski&#146;s on-again, off-again love of the moment, is played by Lili Taylor, who transforms "one of Chinaski&#146;s women" into a deeply touching and deeply human portrait of a fatally afflicted alcoholic. Taylor gets "the female barfly" just right. In fact, Taylor and Dillon execute a textbook perfect portrait of a typical late-stage alcoholic couple, and through grace and skill transform Jan and Hank into Dante and Beatrice lost and roaming through the Inferno.

Bukowski&#146;s vision of the dignity of the alcoholic as artist in pursuit of personal authenticity seduces every time. In this Dillon and Taylor collude with author and director brilliantly. The portrait of low-life Minneapolis as the Bowery (the film&#146;s stand-in for Bukowski&#146;s real-life sleazy Hollywood neighborhoods) adds a further dimension to the film&#146;s peculiar charm. With more levity than Ironweed and more charm than The Lost Weekend, Factotum may leave the moviegoer unaware of just how deep Bukowski&#146;s thrust has gone.