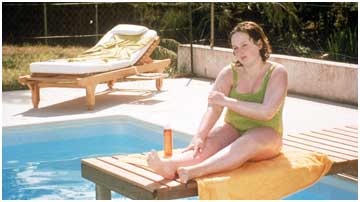 In legal terms and in terms of voluntary restrictions enacted by the media on itself, American society is now as open as it has ever been to the depiction of sex and nudity, which have even made their way onto network television. This, perhaps, begins an approach to the kind of liberation Europe has long enjoyed. Yet Hollywood movies show sex, if at all, in only the most juvenile ways–a la American Pie. Hollywood sex is either an embarrassing joke or a glossy fantasy.

In the meantime, the French have been pushing the boundaries of sexual exploration and depiction with such movies as L&#146;ennui, Pola X, An Affair of Love, and Romance. This might, in part, be motivated by the horrible financial state of French cinema. Sex is an area in which Hollywood cannot compete with the French. More pertinent, though, is a philosophical difference: French filmmakers find sex an essential element of human life that pleads for representation in art. Catherine Breillat certainly cannot be mistaken for jumping on a bandwagon as she has built her film career of over 20 years around examining women and sex in society.

Fat Girl is not as explicit as Breillat&#146;s last film, Romance, but it covers more emotional territory. Fat Girl feels as desolate and bleak as the ironically-titled Romance felt cold and distant. Breillat uses no warm colors.Whatever primary colors that appear are muted or coarse.At least here, though, the characters resemble humans as opposed to the automatons of Romance.

In Fat Girl, overweight 12-year old Anais (Anais Reboux) and beautiful 15-year old Elena (Roxane Mesquida) are sisters on their family vacation. The two persistently torture each other between much rarer moments of emotional bonding. Elena makes fun of Anais&#146; obesity and constant eating while Anais accuses Elena of being a slut.

Partly in reaction to her sister, Elena sidles up to Fernando (Libero de Rienzo), an Italian law student, and seduces him. Later, Fernando creeps into Elena and Anais&#146; room at night. In an extended sequence that is the highlight of the movie, Breillat captures all the fear, desperation, confusion, anxiety, and pressure behind the negotiation for consensual sex. Elena is neither sure that Fernando loves her nor is she ready yet to give up her virginity.Meanwhile, Fernando utters every inane excuse he can come up with for her to let him go all the way. The power in the scene comes from Elena&#146;s youthful naivete, which prevents her from seeing through the more experienced Fernando. At the same time, Anais, who pretends to be asleep, does. The rest of the film is devoted to how Elena and Fernando&#146;s relationship affects the relationship between Anais and Elena.

Breillat is stridently provocative in the presentation of her material.She shows Anais stuffing her face and pathetically lathering loads of suntan lotion over her plump arms and legs. Breillat includes one shot of Anais looking like a beached whale. All the while, she dares the audience not to judge the character.Todd Solondz would love Breillat&#146;s films with their dark, oppressive views of sex and romance, but her films, and that includes Fat Girl, suffer from the same heavy-handedness Solondz&#146;s do.Ultimately, the events in Fat Girl feel more like they are chosen to justify a skewed feminist polemic rather than developing from an organic story. The most spectacular example is the shocking deus ex machina ending. It is literally bludgeoning. While Breillat has much to say, and some of it is worthwhile, bludgeoning results more in turning away an audience than in convincing it.