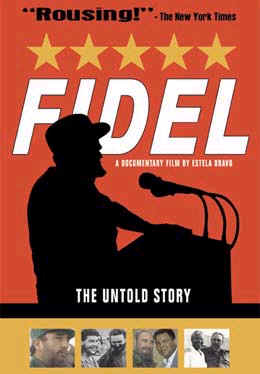 Live By The Sword: The Secret War Against Castro and the Death of JFK

&#147;You can convict me, but history will absolve me,&#148; says Fidel Castro, on trial in his youth for subversive activities against the government; he then turns to a reporter and asks &#147;Did you write that down?&#148; As recollected by the reporter, Castro’s statements show a courageous and even visionary political language, and an obsession with showmanship. Estela Bravo&#146;s Fidel is not a merely a documentary of Castro&#146;s political triumphs or failures; it is not even, as many other studies are wont to be, a long look of disbelief at this canny politician&#146;s longevity. Fidel is more than that–it is an unashamedly one sided view of Castro’s reign, one in which he is converted from a pot bellied old man (perhaps inadvertently shown at the beginning of a movie while swimming in the sea) to a modern day David fighting the modern day Goliath, the United States of America.

Fidel shows Castro in his youth: handsome, debonair, and possessed with ideals of social justice. &#147;I am seeking representative democracy and a just society with a well planned economy,&#148; he declares in an interview when he was a mere guerilla leader fighting against Batista, the Cuban dictator. Bravo loves her subject and her adoration finds a perfect score with her camera. She lovingly depicts Castro in his guerilla fatigues, and, in a scene straight out of a Warner Studios production, she shows file footage of a white dove landing on Castro&#146;s shoulder during a victory speech in the Cuban revolution. The dove moment is of great symbolic importance, as is explained by an aged Cuban guerilla leader who served under Castro. His face crinkles into laughter when he explains that there was a collective gasp from the superstitious Cuban crowd during the &#145;dove on the shoulder&#146; moment. The audience laughs with him, and Bravo has skillfully managed to rope in the audience and let them share the magic of the moment along with its absurdity.

Inevitably, the film comes to the U.S.-Cuba estrangement and the former Soviet Union-Cuba love fest. Cuba, with its communist leanings, has always been a thorn in the side of its neighboring behemoth, and as former CIA operatives themselves acknowledge, there have been several U.S.-sponsored assassination attempts on Castro. Bravo asks Castro &#147;How many times have they [CIA and the Cuban exiles] tried to kill you? Castro replies &#147;I&#146;ll only know when I get to heaven.&#148;

The Cuban leader also engages in friendly banter with Nikita Khrushchev, the Soviet leader. As much as Cuba was dependent on the former Soviet Union, Khrushchev is still shown in awe of Castro: &#147;I don&#146;t know if Fidel is a communist,&#148; Khrushchev is reported to have said, &#147;What I do know is that I&#146;m a Fidelist.&#148; The documentary holds the Soviets solely responsible for the Cuban missiles crisis, and thus varnishes further the tragic hero figure of Castro. Fidel describes the massive advances Cuba made in literacy, health care and sugar production under Soviet tutelage. It shows the country’s &#147;special period&#148; of economic hardship after the Soviet Union collapsed. The accent is always on external events, presenting Castro&#146;s Cuba as a victim of circumstances and Castro&#146;s rule as only mitigating, never exacerbating Cuba&#146;s problems.

For spice, Fidel adds the chummy relationship between Castro and several leaders and writers from the African American community (Harry Belafonte, Alice Walker). Castro pays two visits to African American leaders in Harlem. In his typical bravura style, he appears in military fatigues. &#147;I came to Harlem in my military fatigues [years ago], so how can I come dressed [now] as a gentleman?&#148; Castro exclaims to delirious cheers from the crowd.

Even more interesting is Castro&#146;s relationship with leaders from the African continent. The smile on Nelson Mandela when he meets Castro cannot be faked; it&#146;s as bright as the amber sign. There is no rigid diplomatic talk here; Mandela spends half the time asking Castro to come to South Africa. Castro gets the same fawning treatment from the leader of Namibia. It seems Castro sent some thirty thousand troops and truck loads of medicine to Africa to aid left-leaning African leaders in their military campaigns, and they remember the favor. It&#146;s in these moments that the film comes alive. Castro&#146;s charm shines like a beam of light through everyone in the audience and even the most hard-boiled capitalist knows he is in the presence of a charismatic figure–a rogue perhaps, but surely a charismatic one.

Fidel is an exhilarating experience. In part, it is the subject matter: its hero started out as an idealist and an intellectual, married his sweetheart, became a gun-toting Rambo, conquered a country, helped the poor, survived the ire of the world&#146;s most powerful country, and is revered by leaders across the world. In part, it is the film&#146;s uni-dimensional focus; there is no discussion of how Cuba might have suffered under the repressive policies of Communism, how Cuban exiles in Florida and elsewhere feel about Castro, and ultimately why Castro has always looked towards the United States to take the first step towards rapprochement and has done little personally to alleviate mutual hatred and distrust. Fidel transcends its genre to become a celebration of a heroic and now almost mythic figure. For some, Fidel may come on as too strong–like a mambo in the midst of a black tie event.