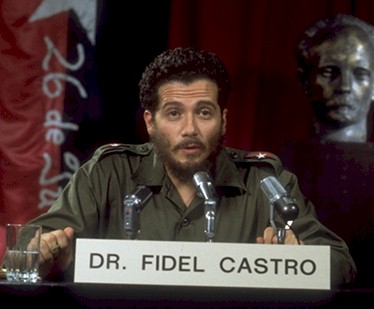 Fidel Castro is one of the more interesting figures to have appeared on the international political scene in the twentieth century. He defied the United States and got away with it. His revolutionary movement had the support of a substantial portion of the Cuban population. He has been the devil incarnate for a large number of Cubans driven into exile. His policies have unquestionably weakened the economic stability of his country. And yet he endures.

Presenting a biography of a man who is still in power requires a point of view. It need not be as provocative as Oliver Stone&#146;s treatments of Nixon and JFK, but it ought to have something to say. The two-part mini-series Fidel, presented by Showtime, attempts to present a balanced portrayal of Castro. The result is surprisingly bland and adulatory at the same time. Part of the problem lies with the actor chosen to play Castro. Victor Huggo Martin looks reasonably like Castro and develops his character, going from earnest to vehement. But he does not generate any excitement&#151;he lacks charisma.

The series devotes most of its attention to the genesis and the early years of Castro&#146;s revolution, from 1950 to 1962. The final third rapidly covers some key moments from then roughly up to the present. Beginning with Castro as a young lawyer, committed to helping the down-trodden, he is shown drawn into politics and then into rebellion, staging a failed attack on a Cuban Army barracks that becomes the symbol of his revolutionary movement against the military dictatorship of General Batista. Castro is determined to change the course of his country’s destiny and eliminate what he sees as the stranglehold of U.S. business interests, particularly the United Fruit Company.

While the forces of the young revolution are centered in the Sierra Maestra (the high jungle country), a visit by a New York Times journalist (Matthews) is arranged. Matthews is chosen deliberately because he is known to be sympathetic to liberal causes. He believes what he is told. The exaggerated accounts of the rebels&#146; strength are accepted at face value and find their way into print, to the amusement of Castro and his cohorts. Here begins a gradual shift in the character of Castro.

Initially portrayed as an idealist and an optimist, Castro becomes, ultimately, an intolerant zealot. At first vehemently anti-Communist (although his brother, Raul, who was an integral part of the revolution, was always aligned with the Soviets), he then embraces the Communists. His attempts to develop exportable agricultural products are notable failures, yet he refuses to admit the failures. His early idealism gives way to ruthlessness and then paranoia.

In their attempt to show both the good and bad sides of Castro, screenplay author Stephen Tolkin and director David Attwood want to have it both ways. Even though they portray Castro&#146;s weaknesses and less admirable traits, they are in the thrall of this man. There is a romantic aura about him and his revolution. This is particularly noticeable in the depiction of Castro&#146;s relationship with Che Guevarra, skillfully played by Gael Garcia Bernal. They first meet during Castro&#146;s exile in Mexico, but by the mid-1980s, when the revolutionary government is firmly ensconced, Guevarra decides that he is not interested in being part of the status quo. He wants to keep on being an active revolutionary. The film follows Guevarra after he departs Cuba for Bolivia. It depicts his murder and then the action shifts back to Castro who laments that he could not save the man. In the death of Guevarra Castro sees the end of his ambitions to spread revolution throughout South America. This portion of the series seems to deify Guevarra, contributing to the romantic notion of Castro as a failed idealist.

In an obvious attempt to generate viewer interest, sex scenes are sprinkled throughout the film. Castro was a womanizer, so he is shown bedding every woman who crosses his path. One of his conquests is Celia Sanchez, the revolution&#146;s public relations officer and also its voice on the radio. She is played by Cecilia Suarez, who gives one of the strongest portrayals in the film. There are many convincing performances, including Ernesto Godoy in the role of Huber Matos, a partisan who becomes the revolution&#146;s first scapegoat.

Efforts have been made to make the film seem authentic. The cast is bi-lingual, with background dialog in Spanish. When speaking in English, they favor Spanish inflections, so that Cuba is pronounced Coo-bah, not Cue-bah. To give a flavor of the time, some shots shift from color to black and white, capturing a period newsreel quality (some actual newsreel footage is interspersed&#151;the true black and white has a different tint). There is also one glaring social error:early in the film Castro attends a party at the home of a well-to-do family. On the dance floor in front of everyone he gives a long kiss to a woman. This never would have happened, as social conventions of the day did not permit such behavior. He would have been immediately accosted and thrown out. That no such action is taken is indicative of the romantic intent of this series.