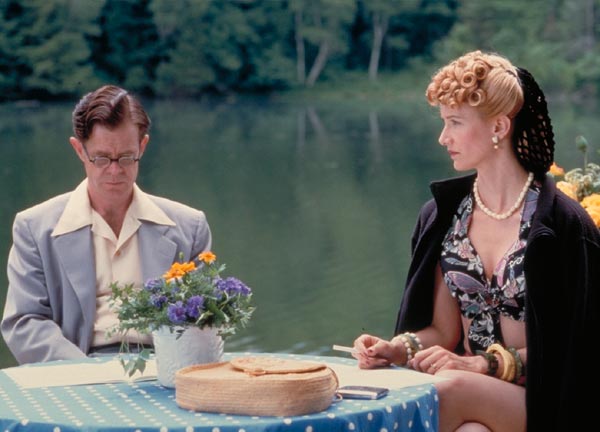 Arthur Miller is by any account a major figure in American letters, principally as a playwright. Had he written nothing other than Death of a Salesman, his position in the pantheon would be assured. With a pronouncedly social/political bent, the intensity of his convictions sometimes renders his work didactic, hammering down points with the enthusiasm of an anvil pounder in Il Trovatore.

Focusis an early Miller work, a novel first published in 1945. It’s subject is bigotry in general and anti-Semitism in particular–although the latter term is strangely, rather coyly absent from Paramount Classics’ press release announcing their acquisition of Neil Slavin’s film based on the novel.

Lawrence Newman (William H. Macy), a fortyish self-effacing personnel manager, lives with his mother in Brooklyn during World War II. He’s the kind of guy who carries an umbrella to work on a bright and sunny day. From his window one night, he observes a neighbor raping a young woman, but he does nothing about it. When he gets a needed pair of glasses, it changes his appearance sufficiently that his boss of twenty years feels he "doesn’t make the right impression on people" and shifts him to a less responsible job. The euphemisms of bigots abound.

Newman finds a new job at a Jewish-owned company where he again meets a woman (Laura Dern) he had himself refused a job under his prior employer’s discriminatory policies. Ironically, she isn’t Jewish either. They marry, but life becomes ever more difficult as a neighborhood chapter of a fascist organization targets both Finkelstein (David Peymer), the Jewish news vendor on the corner, and the Newmans, who have been perceived as Jewish.

There are interesting shadings in the avoidances and denials in which the Newmans seek to take refuge. But refuge is not to be found. The moral is writ (all caps, black, bold) clear: even innocent bystanders are not immune from the effects of irrational and vicious bigotry. It’s a message that is always timely and cannot be repeated often enough. The question in evaluating the film is how effectively it is conveyed.

Once the noir atmosphere of the early rape scene has passed, the debut screenplay by Kendrew Lascelles schematically moves from one manifestation of bigotry to another. The name calling (spic, nigger, yid, kike) is relentless. There’s petty neighborhood harassment, blatant thug-like violence, employment discrimination ("We can’t have her kind here."), even restricted hotels. It’s as if a catalog were being prepared. The convenient coincidences that allow the plot to work seem strained as well. And if director Neil Slavin lingers on a patriotic poster acclaiming "our way of life" once, he cannot resist having the poster reappear repeatedly in scene after scene.

What saves the film are the performances. Macy (State and Main, Magnolia), consistently a reliable and skilled performer, achieves here a wide emotional range that successfully negotiates the changes in Newman’s understanding of his situation. In what may be the best entrance of the year, Dern (Dr. T and the Women, Jurassic Park III) sashays down the aisle of typists to Newman’s office to be interviewed, glamorously overdressed, lips brightly rouged, blond curls cascading. Her sexy, buoyant, easy-going manner masks the emotional bruises and insecurities from her checkered past and Dern gets it all just right–a vibrant performance of award caliber that almost single-handedly pulls the film up from the scripted and directorial heaviness which constantly threatens to bog it down.

Slavin, on his first feature outing, brings his fine photographer’s eye to the film. Together with cinematographer Juan Ruiz Anchia, he has created a stylized look that intensifies the drama. (The influence of David Lynch is manifest.) But with a screenplay that is already intense and pounding away at its points, the visual style adds to the overkill. Filmed in Toronto and attempting to portray the New York of the 1940’s, the film achieves little sense of place, surely not the texture of New York. Vicki Graef’s costuming is notable, both stylish and appropriate. Her ensembles for Laura Dern should earn her an Academy Award nomination.

A less melodramatic approach to Miller’s novel might have proved more effective. The contrast of the day-to-day life of ordinary people with the subtle, sinister force of bigotry insinuating itself into their lives would create a more powerful message than Slavin’s overkill. Still, Macy and Dern transcend the proceedings to create some memorable moments.