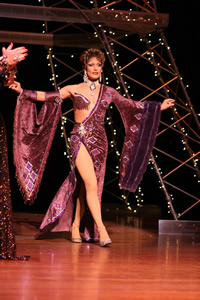 A film that blows all notions about gender and what it is to be a female impersonator won this year’s audience award for bestdocumentary at Frameline’s International LGBT Film Festival.

I thought Pageantwould be just another drag competition. Instead, it was outstanding in its succinct approach and more subtly subversive than I expected. Directors Ron Davis and Stewart Halpern take us behind the scenes of the 34th annual Miss Gay America Pageant in Bible belt Nashville. This is a town more open to diversity than one would think. Holy Transformation! The annual event takes place in the city’s main theatrical venue.

The original 52 contestants are widdled down to five interviews with the men who come closest to winning the crown. However fascinating the process, I rejected the final decision made by the judges, clearly based on some ridiculously boring status-quo standard. Itseemed to reflect the shallow choices seen in the Miss America Pageants.

A favorite contestant, who made a huge welcome surprise appearance with the directors at the screening in San Francisco, was Pork Chop. Perhaps not the poster girl for Miss Gay America. Pork Chop is chubby, intelligent and was an audience favorite. In ways you would only expect from a trained gymnast, one scene captures her in rehearsal flying onstage –belly first– defying any preconceived notions about weight or agility. She lands with perfect timing to punctuate the song’s finale.

Each contestant revealsthe motivation for becoming a female illusionist. They also unmask insecurities about their physical appearances, both as men and women. Each nominee consecutively sets a precedence for the next one’s ingenuity. One contestant protests not being able to use props as a challenge and has a dead ringer Siamese twin made. The depth of the unfolding story grows when we get down to final ten. Their families get involved, the stakes get higher and we become more invested in the personal risks they take to gain the title. One performer reveals that he spent $70,000 on pageants in the past few years and would not stop until he wins.

Pageant is but one of my top picks as we witness Michael Lumpkin’sdepartureas artistic director afterthree decades at Frameline. This gave impetus for a retrospective of Queer cinema allowing viewers to look back at LGBT film highlights in new features, shorts, and documentaries from the US and abroad. Many of the films first seen at Frameline’s festival are now well known and have influenced their respective cinematic genres with groundbreaking contributions. Among them Mala Noche, (1986) by Gus Van Sant, Law of Desire, (1987) Pedro Almodovar, Bound, (1996) by Andy and Larry Wachowski, Lillies, (1996) by John Greyson. One could not help but realize how revolutionary these films were when they first were screened adding to the conversationof “where we’ve been and where we’re going.”

Films were screened at three of San Francisco’s oldest theaters: The Victoria (San Francisco’s oldest theater), The Roxy, the oldest continually operated, and the ever ornate and glamorous Castro Theater. “An acre of seats in a palace of dreams”, the Castro has a working Wurlitzer organ replete with pre-show organ player churning out old show tunes to the 1400 seat auditorium, packed to the gills in the heart of this Gay Mecca.

Subject matter at Frameline ranged from an insightful look into the lives of queer elders to Native American Two-Spirits whose tribes historically held a special place for men and women who didn’t fit into gender roles. Subversive new documentaries like the groundbreaking, A Jihad for Love about lesbian and gay Muslims by Parvez Sharma, (co-produced by Sandi DuBowski, creator of award-winning Trembling before G-d about gay orthodox Jews). Pansy Division: Life in a Gay Rock Band, by Michael Carmona shows off the wacky and smart band from the San Francisco underground 80’s punk scene going big time.

Out In India directed by Tom Keegan, chronicles author, activist organizer David Gere, (yes, brother of Richard Gere), on a Fulbright-funded trip to India. Utilizing art as a model for social change Gere received the Fulbright to support his organization of an AIDS awareness conference in India called Make Art/Stop AIDS. Familiar with the power of art to raise awareness, Gere is the first person to publish a book about dance during the early days of the AIDS epidemic.

When he and his partner Peter Carley travel to India with their two adopted African –American children, they must adjust to a culture where queer parenting is non-existent nor socially acceptable. This initial struggle sets the tone as they encounter many other obstacles to find care and education for their children and a stable environment in which David can conduct his research.

Art activism plays an important role to get the message out in India, the second largest country with the most cases of HIV next to South Africa. Ninety percent of those infected are unaware because they have no access to education. Following Gere around the country to tiny villages in search of artists to participate in the conference, we witness a uniquely Indian aesthetic about AIDS. Villagers crowd around awe-inspiring and intricately painted, scroll books. From the scrolls performers sing their tales, transforming this ancient form with a new message of safer sex. Huge Bunraku-like puppets and street theater appeal to audiences across age, gender and sexual orientation.

For a culture so youth obsessed, Frameline this year provided a refreshing take on the latter phase of life, showing the history, dignity and wisdom that queer elders contribute when honored in the larger social sphere.

Chris and Don: A Love Story

Chris and Don -A Love Story by Guido Santi and Tina Mascara hit screens around the country in July. The remarkable documentary recounts a 34-year love affair and a 30-year age difference between author Christopher Isherwood and portrait artist Don Bachardy. The prolific and well-respected Isherwood is best known for his book The Berlin Stories,inspiration for the musical and film Cabaret. Cleverly compiled raw footage of jaw-dropping, 8 mm film the couple shot on many trips was spliced together with amazing photos of their lives. Celebrity-studded events and intimate gatherings with friends appeared as if filmed by the documentarians.

Cleverly re-created from actual drawings and love letters was a delightful, animated cartoon of their fabled counterparts the cat and the horse — allegorical stand-ins for their relational roles, ameliorating difficulties in the couples many years of partnership. Equally moving was the portrayal of commitment that Don showed to Chris at the end of Chris’s life. As a way to process the impending grief, each day Don draws a portrait of his beloved. Time is frozen as we witness the rare and heroic ability of the couple to sit with the experience of Chris’s slow death.

One of my favorites from the documentaries on aging was the beautifully edited, Ten More Good Years. This eye-opening film illustrates the depth of the injustices from the perspective of gay elders who came from the era of elcotro-shock treatment and a diagnosis of mental illness if one was found to be gay. Filmmaker Michael Jacoby brought light to the many issues queer elders face after 65. Among them outdated tax laws, Medicare, Social Security, inheritance laws and the need for non-discriminatory housing.

By celebrating their life work, the director introduced us to the fascinating lives of these vulnerable people whose stories might be lost without this film. Miss Major, a longtime activist in the lesbian, gay, bisexual and transgender community was on the front lines of the 1960s gay rights movement at the historic Stone Wall in New York. She had to relocate to Oakland because at age 64, she could not get proper health care in New York. Equally engaging were other interviews with John Bernside, inventor of the Teleidoscope, partner of Harry Hay and co-founder of The Radical Faeries. Also, James Bidgood, photographer and filmmaker who inspired the work of French artists Pierre et Gilles and only recently discovered to be the anonymous creator of the 1971 cult film Pink Narcissus, which visualizes erotic gay fantasies.

One of the best series of short films in the festival wasA Gay Old Time. Again,

another insightful look into the lives of Queer elders. It featured Forever’s Gonna Start Tonight, by director Michelle Lawler and stars Vicki Marlane, who at 71 is "the oldest living, (still) performing transgender drag performer.” She can still be seen performing "Total Eclipse of the Heart" in San Francisco. This is a power ballad originally performed by singer Bonnie Tyler in 1980. One can’t help think that the infamous version by Justin Bond (a.k.a. Kiki, of Kiki and Herb) performed at Carnegie Hall, may have been inspired by her.

Equally enchanting was Just Me? by director Amy Neil, exploring her discovery (through a photograph) of a long-term lesbian relationship that her great grandmother had with a woman. Following her curiosity about the nature of the relationship and why it was kept a family secret, her research reveals through family photos and letters that they were closeted lesbians coupled for many generations.

An evening of films about the Two-spirit tradition featured Byron Chief Moon: Grey Horse Rider, by documentarians Marlene Millar and Philip Szporer. Two-spirit culture is seen as a bridge to the spirit world that is known to be genderless. Before colonialism hundreds of tribes respected these people as very gifted artists and healers, important links to the deities.

In this riveting portrait about identity and tradition we witness a man who dances alone in the forest as a spiritual practice that informs his art. Byron Chief Moon, father of three, film and TV actor, dancer and choreographer has struck a balance between his life as a Canadian Blackfoot tribal elder and his life as a contemporary artist and father.

Portraying the fashion industry as a cold and heartless business made of surfaces and caustic criticism, Eleven Minutes directed by Michael Selditch and Rob Tate is a crazy rollercoaster ride through the creative process of Jay Mc Carroll, winner of the first season of Project Runway. In an attempt to establish himself as a real designer aside from his Project Runway celebrity status, we witness the launch of his own line of clothing during New York’s Fashion Week. Even if he is not seen as a success in the rags biz, he is an incredibly creative force and the film offers a very thrilling insiders’ view of his creative process. A tragic end shows that even with all his money, celebrity and effort spent on McCarroll’s innovative endeavor, he is left penniless. In the end he winds up selling himself on the QVC shopping channel.