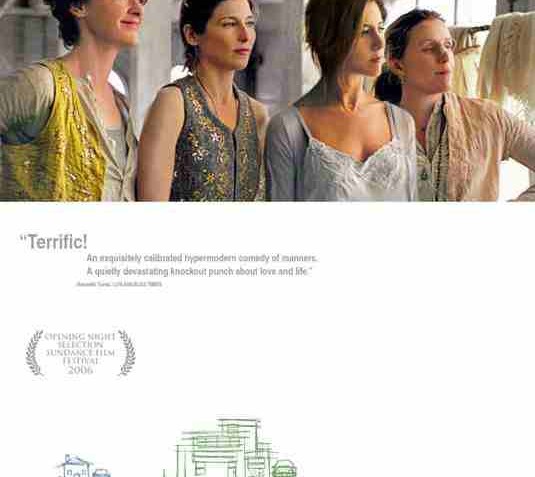 Friends with Money, Nicole Holofcener&#146;s third feature film, has a lot in common with that old 1980s TV series thirtysomething. It is witty, engaging, observant and full of upper-middle-class Los Angeles angst. (Okay, so the thirtysomething gang lived in a TV version of Philadelphia.) Three women friends who have or have married some money express concern over a fourth woman friend, unmarried, who makes a living as a maid. Frannie (Joan Cusack), Jane (Frances McDormand), and Christine (Catherine Keener) are all struggling with variously successful marriages, professional success, and self-esteem derived from perceived levels of success. Olivia (Jennifer Aniston) seems to have sworn off the curse of money, and instead she obsesses about finding a man.

A kind of Sex and the City for moviegoers, Friends with Money uses an ensemble cast for a sometimes entertaining look at contemporary mores. Frannie is married to Matt (Greg Germann), the wealthiest couple in the bunch. Christine is married to Patrick (Jason Isaacs) and they are a screen-writing couple who work out of their home, even while a second-floor addition is being built. Jane is a successful clothing designer married to an effeminate (but heterosexual) man, Aaron (Simon McBurney), the real talent behind their design company.

Jane is the overtly aggressive yuppie-SUV-driver type, quick to call others on their imagined social infractions and given to neurotic public outbursts of temper. At one point she becomes so incensed over another couple cutting ahead of her in line at a clothing discount shop, that she walks straight through a plate glass window. Multiply such telling incidents by the number of players (four women and six men) to arrive at Holofcener&#146;s formula for playing with the complexities of (upper-middle-class, southern Californian) American social relations.

Compared to her friends, Olivia (Jennifer Aniston) is completely sympathetic, as she has become involved with one "exactly wrong" man after another, first Mike (Scott Caan), then Marty (Bob Stephenson). Olivia&#146;s relationship with Mike, the narcissistic, "oh-so-LA" personal trainer, provides a primary vehicle for the film&#146;s humor. The audience understands why Olivia is single–anyone so unable to say no to such a total loser probably should avoid dating anyone, ever. Olivia&#146;s friend has unloaded the jerk on her as a joke–the friend thinks it&#146;s funny. That Olivia has friends who treat her as badly as the boyfriend of the day, well, maybe Olivia just needs to get herself some new friends while she&#146;s at it.

Witty and fast-paced as these snapshot scenes are, after a while the big picture grows tired and trivial. These people really are self-absorbed and live in a self-contained, private world. Eventually the light romantic comedy of manners becomes a fairy tale and Olivia will prove to be Cinderella, rewarded for sticking to her true values. Besides, she&#146;s kooky, she&#146;s cute and cuddly, she deserves someone really special after all her travails. Extra points to Jennifer Aniston for keeping the audience awake for an otherwise forgettable ninety minutes.