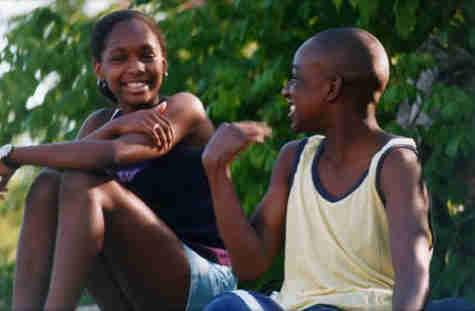 George Washington opens with two youngsters, barely into their teens, in conversation. Nasia (Candace Evanofski) is breaking up with Buddy (Curtis Cotton III), who is still crazy about her. "Did you think we were going to be together forever?" she asks him. When he asks for a last kiss, she asks, after a pause, "Tell me that you love me. Do you love me?" And Buddy remains silent and looks away. They speak in slow, flat tones, but with sincerity, and there’s an undertone of sadness and loss. The scene feels authentic; it may have been improvised, as some parts of George Washington were. There are pauses in the conversation as these kids grope to express feelings that they barely understand, no less have the words to articulate.

With minimal plotting, George Washington, is episodic and often feels like it may run off at the edges, but it doesn’t–it manages to achieve a mood, a tone, and a sense of warm humanity through enough of its hour and a half to hold the interest and share some insights about kids in an adult world–poor kids living in a decaying industrial area by the railroad tracks in Winston-Salem, North Carolina.

Nasia has found herself a new boyfriend, George, who wears a football helmet to protect his head which is vulnerable due to a soft cranium. George has big dreams–to live forever, to be president of the United States–while Nasia is more focused on the practical and the here and now: she wants to see George waving a flag in the Fourth of July parade. While these poor kids seem to function in a comfortably racially-mixed milieu, that Fourth of July parade is all white and middle-class and George does not get to march.

Ironically, George, with his physical vulnerability, is not the one to suffer the serious blow to the head. But George does become a hero, diving into a swimming pool to rescue another kid who is drowning. After that he adapts a super-hero costume–tights and an improvised cape. "If no one would look after him," observes Nasia, "at least they would look at him."

Less well realized characters are Vernon, who gets one long monologue that doesn’t quite work, and Sonya, a tough little blond who confesses, in effect, to being a sociopath.

Instead of a more conventional plot involving a central conflict, first-time director David Gordon Green relies on a series of incidents to explore the minds and hearts of these kids. The scenes with the kids work better than the scenes with adults (a railroad worker, George’s uncle) which are somewhat forced, less interesting, and less convincing. Some segments are more effective than others and some seem more related to the central premise than others which seem like digressions. Green manages to glue it all together with elegant cinematography (Tim Orr) in golden tones and artfully composed frames which show the derelict graffiti-scrawled buildings and weedy backroads in a sort of idealized child’s-eye view. Occasional slow motion and minimalist electronic and piano music droning quietly in the background much of the time add further dimension of mood.

Green acknowledges the influences of Terence Malick and Robert Altman, noticeable in the mood, look, and tone of the former, the ensemble cast approach of the latter. While uneven, George Washington is a work of imagination demonstrating an original voice and cinematic vision that mark Green as a filmmaker to watch.