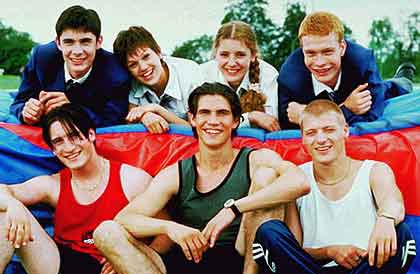 Get Real, director Simon Shore and producer Stephen Taylor’s film adaptation of Patrick Wilde’s play, What’s Wrong With Angry?,is funny, well made, and thought provoking on many levels. They’ve set out to make the story of an English teenager’s coming to terms with being gay into a universal story about coming of age. For the most part they succeed. The film is bound to appeal far more to an audience attuned to gay issues, where the particular angst suffered by Steven (Ben Silverstone) and John (Brad Gorton) will have special resonance. But you don’t have to be gay to understand rejection and the value of real friends, which are as much a part of this story as sexual identity.

Sixteen year old Stephen has told only his neighbor and confidante Linda (Charlotte Brittain) that he is gay. She chides him for visiting dangerous hangouts in a city park frequented secretly by gay men. But in one of these visits Stephen is astonished to run into the school jock and all around hero, John Dixon. John may be dating the supermodel (Louise J. Taylor), and look like Adonis, but his elevated social standing in the school does not make it any easier for him once he has begun to suspect that he, too, is gay. Stephen and John ease slowly toward a relationship, but whereas Stephen is elated, John wishes to remain firmly in the closet.

The remainder of the story is predictable, and the ending, while perhaps not what you suspect, is still nothing more than a morality play where everyone wins in the long run by being honest.

This is the third "High School” movie I have seen recently. The first two, Ten Things I Hate About You and Never Been Kissed, both American films, are carbon copies of each other, cookie cutter pap where the only issues are who is taking whom to whose prom, or will Drew Barrymore’s cover be blown by the wrong dress and shoes? So the first question is: Does it take the English to leave a film audience with a thoughtful impression of teenagers? Can Americans make a movie (without Matthew Broderick in it) in which teenagers have a brain and a sensibility, instead of dealing only with one or the other set of overactive sex organs?

I also wonder to whom Get Real will be marketed. While the concept may have been crossover, I don’t think it is realized fully. Is it likely that masses of people will be interested in watching two boys kissing in the swimming pool? After all, Get Real is not a comedy, like La Cage Aux Folles, where gay men are more or less lampooned; nor is it a thriller like Bound with lots of action and adventure. As much as anything, Get Real is a simple, classic and innocent boy-meets-girl love story, except there is no girl. The film asks us to get real with ourselves, and examine how we really feel about homosexuality.

Perhaps we check our progress as a society by seeing how deep we will dig into our pockets. Real truth may lie not in speeches and politics and parades down Castro or Christopher Streets, but in how many people are willing to put up their $7.50 to see a simple movie about young boys falling in love with each other. America seems willing to pay to watch Drew and her English teacher. Will we do the same for Stephen and John? It may take a more spectacular movie than Get Real to carry us to that point.