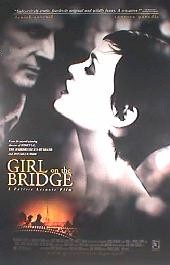 Director Patrice Leconte introduces us to Vanessa Paradis at the very start, intercutting shots of her lively face between the main titles. It is an irresistible face: expressive, open, fine-boned, and carrying a gap-toothed smile – the flaw that renders the whole totally disarming. Paradis plays Adele, who believes that "making love is life," but hasn’t yet learned the difference between making love and having sex. Adele suffers from low self esteem ("My ideas are always bad.") and has sex with almost any man who offers her attention. She is invariably disappointed and is discouraged to the point of leaping off of a bridge. Before she does, a stranger approaches, Gabor (Daniel Auteuil), who tries to talk her out of jumping. "Burned out women are my stock in trade," he tells her, "Trust me, I’ll make you somebody who laughs and takes life with ease."

Leconte tells the story of their love, framing it as a fable, exploring the nature of intimacy and passion. Gabor is a knife thrower and Adele becomes his target, restoring his fading career in the circuit of circuses, casinos, and cruise ships. The stakes grow higher as dangers are added to the act – Adele covered with a sheet, Adele spinning on a wheel, Gabor with eyes closed. And as the stakes grow higher, their passion becomes ever more intense; it is the intimacy of danger, vulnerability, and trust that charges the crackling electricity between them. They don’t have sex (and Adele’s eye keeps roving), but in performing their act they find a profoundly sensual connection; that intimacy is as sexual as if their bodies were connected as one.

After each performance, Gabor gently bandages Adele’s scratches – Leconte’s metaphor for the wounds that intimacy inevitably brings, but wounds that are tended to by the caring lover, wounds that will heal.

Leconte intertwines themes about luck with the exploration of intimacy. "Luck takes will power, effort," Gabor insists, and at another point, "You don’t take it, you make it." Easy for him to say, perhaps, because Gabor is clairvoyant and telepathic. Suspicious casinos have banned him from the tables, but now Adele acts as his surrogate. Together they prosper as they tour the European circuit. Gabor carries his tests of luck to dangerous extremes – he turns off the headlights of the car as they drive on a dark night. "Learn to lose or you’ll take winning for granted," he cautions.

In beautifully composed black and white, Leconte follows the fortunes of Adele and Gabor, each experience, each advance of the plot adding a twist or an insight into the connections between love and luck and destiny. Paradis is a marvel of natural charm, but it is the confluence of her performance and Auteuil’s that is genuinely remarkable. In contrast with Paradis’ charmingly transparent openness, Auteuil’s Gabor is at first articulate, persuasive, but guarded. As events unfold, his vulnerability subtly emerges and the balance in the relationship becomes more complex.

With serious themes that might have resulted in a ponderous scenario, Leconte bouys the proceedings, sustaining a tone of lightness. There is abundant wit and wry humor in the dialogue (screenplay by Serge Frydman). Even as Adele is poised to leap from the bridge, the music in the background is a cheery cha cha rhythm. Choices of music throughout are surprising and apt, in particular Marianne Faithfull singing "Who Will Take My Dreams Away?" as the knives fly and the passion ignites.

While its Felliniesque touches inevitably evoke comparisons, Girl on the Bridgestands as a uniquely original and superbly accomplished work in its own right, surely one of the finest films released in the U.S. this year.