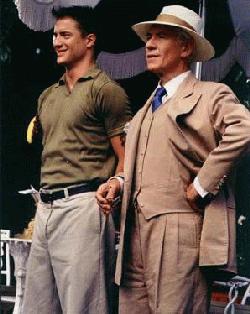 The Father of Frankenstein

(the novel on which the film is based) (1996),Christopher Bram

.. The central dramatic energy in Bill Condon’s warm and sympathetic new film, Gods and Monsters, is the homoerotic attraction that a hunky gardener presents to an aging, retired movie director, played with expected bravado and skill by Sir Ian McKellen. While dramatically valid and appropriate to the characters in the story, if that was all that was going on here it would not be a very interesting film to anyone, gay or heterosexual.

This is a movie about loneliness and caring and the need to belong and be needed, universal themes that happen here to find their expression in a fictionalized version of the Hollywood director James Whale, more remembered for the Frankenstein films that he belittled, less remembered as the director of Show Boat. It is also a movie about aging and its attendant loss of powers. Whale suffers a stroke which doesn’t affect his mobility, but has left his brain with short circuits that allow memories to surface uncontrolled.

Through flashbacks we learn of a working class childhood in a Britain so class stratified as to leave scars on the poor. An officer in the British army in World War I, Whale was able to "impersonate his betters" as well as having an idyllic romance with a younger, upper class soldier, idealized in the falling away of class distinction.

The Frankenstein themes are nicely brought to bear in a number of ways. Whale remembers scenes from the film of brain transplants and the electrical charge which brings the monster alive, themes about the creation of life, even as his own life winds down from neurological failures. "It is a comedy about death," he says, but told so as "not to spoil it for anybody who is not in on the joke." And while Whale thinks that making movies is the most wonderful thing in the world, he does not deceive himself. "Movies never get the stench of it all," he says.

The young gardener, not responsive to Whale’s sexual overtures, is nonetheless drawn to the man, perhaps as the father and mentor for which he is needy. Lynn Redgrave, almost unrecognizable, plays Whale’s housekeeper, a role that nicely adds to the variations on the ways people care for one another.

In a telling clip from a Frankenstein film, the monster comes to the cottage of a blind man, someone not immediately repelled and thereby more open to this other creature. "It is hard to be alone," he says.

Condon has skillfully drawn these various themes into a deceptively simple story with a multiplicity of subtle insights to share. It is a testament to the power of the writer/director whose vision and message are successfully carried from idea to execution in the complex art of film making.