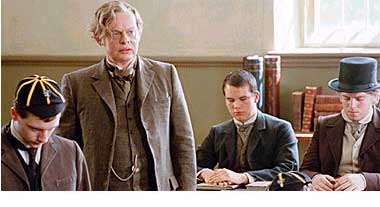 Early in Masterpiece Theater’s Goodbye Mr. Chips the new Latin teacher, Mr. Chipping (Martin Clunes), is led to his first class at the Brookfield school by John Rivers, a self-possessed teenager who sails through the campus like a prince in a straw boater. The boy, played with arrogant brio by Harry Lloyd, barely breaks his stride to box the ears of his "fag" and terrify other students into silence, all the while instructing this shy young teacher trailing in his wake on the arcane rudiments of Brookfield slang.

It is a sequence that briefly captures the brutality, charisma, and insularity of the British ruling class, and firmly establishes the title character as at that moment, an outsider both at the school and among the future leaders it educates. The scene is so sharply etched (and Lloyd gives such a bravura performance) that for a few minutes some viewers may be looking in vain for another appearance by young Rivers before being engaged by Clunes’ gentle and effective performance as Mr. Chips.

James Hilton’s short 1934 novel, which follows the career of an idealistic schoolmaster from the late 1800s to the 1930s, is so subtle that no filmed adaptation can be truly faithful to it. Characters and incidents that receive no more than a sentence or two in the written version must be fleshed out. Important events like Chips’ courtship of his wife must be given details beyond the generalities offered in the book.

As a result, there are as many versions of its title character, his marriage, and his friendship with the German teacher Max Staefel as there are filmed versions of his story. In this case, Chips is depicted as a profoundly ordinary man, not exceptional in any way except in his uncompromising kindness. He may appear to be the broad-beamed epitome of the English conservative but Clunes’ open, vulnerable face registers the tenderness and occasional outrage of someone who neither understands nor tolerates cruelty. "What is your model in all this?" he asks, his voicing rising not with anger, but with uncomprehending anguish as he interrogates a boy he’s caught in an especially brutal act. "What convinces you that this is the behavior of a gentleman?"

The unspoken answer in this film is, sadly, a school system that tolerates and encourages bullying. Goodbye Mr. Chips is about a modest man’s uphill struggle to educate his students, not just in the basics of Latin, but in the basics of human decency, and Clunes achieves this without making his character either self righteous or saccharine.

Victoria Hamilton is delightful as the lively, liberal young woman who conquers Chips’ shyness and, as his wife, leads him to be a friend as well as a teacher to his students. Conleth Hill plays Max Staefel, the German teacher whose career at Brookfield is doomed by the advent of war, and John Harding is canny and unexpectedly sympathetic as the adult Rivers. At times the plot may seem a bit too slow-moving, but the film gets under its audience’s skin so quietly and unobtrusively that by the end many viewers will find themselves suddenly clearing their throats and reaching for the Kleenex.

While it may not be possible to film a version of Goodbye Mr. Chips that is utterly faithful to the letter of the original, this one comes as close as it can to capturing the book’s unromantic and genuinely touching spirit.