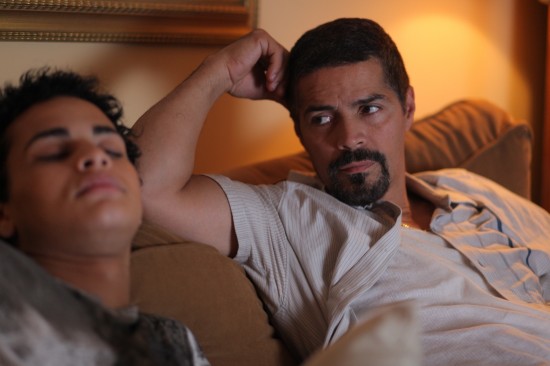 Gun Hill Road is both a highway across the Bronx and a New York City subway station in a heavily Puerto Rican neighborhood. The film of the same name presents a family struggling with both the typical problems of urban criminality (the father, for much of the film, is an ex-con) and the not so typical problems of a transgender-identifying teenaged son. Given the father’s deeply held macho values, there can only be conflict in such a family.

In the opening scene of “Gun Hill Road,” Enrique (Esai Morales) is involved in an altercation with another prisoner in which homophobic name-calling is exchanged; prisoners call each other “faggot” and the viewer gets that homophobia is a core value in the world of American prisoners. Enrique is soon paroled and, by agreement with his parole officer, understands the “straight and narrow” path he must follow if he is to stay out of prison. “This is your third time,” the parole officer points out, “why should I believe you this time?”

Enrique reunites with his wife Angela (Judy Reves), tries to coax his son Michael (Harmony Santana) to a game of baseball. Enrique find a job, but quits as soon as he is criticized. And soon he is back in the game, engaging in small-time theft at gun point, beating his enemies up, and beginning to notice disconcerting aspects of his son. The audience can only wonder how long it will be before the macho will wind up back in prison. Writer Rashaad Ernesto Green sometimes seems to want the film to be about the traps of lower-class macho culture, perhaps in its Puerto Rican inflection. But the film never goes past stereotypes.

Meanwhile, a whole other film unfolds. We first meet Michael on-stage reciting poetry, as Vanessa, at a gay club. Michael is trapped half way in the process of coming out as a transgender-identifying person. He still lives at home and his mother knows he dresses up and wears make-up at school. Vanessa is still a virgin and struggles with her first sexual relationship, with an African-American teen who knows she’s “that way.” Vanessa’s vulnerability and bravery echoes with shades of “The Crying Game.” Vanessa’s mother is protective and tries to be understanding of something that never dares be spoken, while her father reacts in stereotypical macho fashion.

This film is a bit of a downer, a long way from the uplifting message of the 2005 film “Transamerica.” It never makes up its mind whether it’s about the father’s issues of working through the stultifying consequences of his macho belief system or a coming-out film about a transgender teen. The latter story is portrayed sensitively and with heart-felt insight. The former tale falls down and makes for a weaker, cliché-filled film. The end result is a film that does not move the viewer nearly as much as it could have. At least it puts a sympathetic view of transgender issues before a general movie-going public.