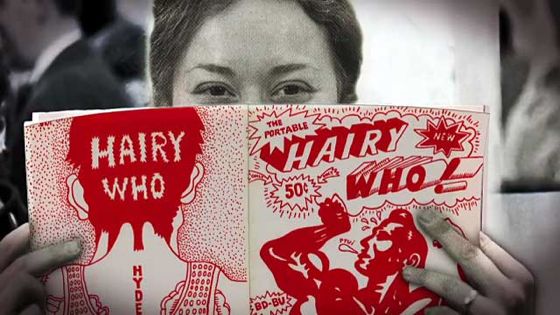 Do you remember your first look at the so-called Chicago Imagists in Chicago galleries in the ‘60s and ‘70s? Whether you were on your own or in a stroller pushed by your parents, you surely found the art of the “Hairy Who” to be eye-popping, colorful, vulgar and fun.

You can relive those artistic memories in “Hairy Who & the Chicago Imagists,” a lavishly illustrated new film documentary that illuminates the lively and confrontational art movement that started here in the 1960s. Director Leslie Buchbinder combines film of the young artists and interviews with many of them in their later years. Other interviews are with the 21st century artists they influenced, such as Jeff Coons, Peter Doig and Chris Ware, as well as collectors and curators. Best of all, we see many of the actual works—vibrant, vivid and surreal paintings and objects. The production also features great animation work and original music.

Some of the famous Hairy Who images were Wirsum’s vivid portraits of musicians like Howlin’ Wolf, Junior Wells and Screaming Jay Hawkins; Nutt’s cigar-chomping, amputated women; Paschke’s garish portraits of women inspired by posters outside strip clubs; and Ramberg’s studies of corsetry and bondage.

You can view a selection of art and watch the film trailer here. http://www.pentimentiproductions.org/projects/hairy-who

The Hyde Park Art Center, then directed by Don Baum, is credited with giving the art movement its first visibility in group exhibits starting in 1966. Art critic Franz Schulze gave the exhibit a positive review, commenting that the artists were “embracing pop culture in its most vulgar form.” At the time, other critics used words like pugnacious, puerile, scatological, comical and absurd. How could we not love art that so offended the establishment?

The movement was a cousin to the pop art movement that grew in New York. The film makes the point that New York art tended to be more impersonal, large scale and abstract. Cool, that is, where this Chicago art was subjective, personal—and hot.

Unlike some other art movements of the time, Chicago Imagist art did not sell out for commercial purposes. As underground artist Gary Panter said, “Everything that was invented in the ‘60s could be co-opted, immediately. There was no problem co-opting Op Art, Hippie Art, anything. But the Hairy Who couldn’t be co-opted. It had embraced insanity and psychosis. And you don’t sell toothbrushes with that.”

The 105-minute film is written by John Corbett and narrated by Chicago actor Cheryl Lynn Bruce, with animations and titles by Lilli Carre, motion graphics by Julius Dobiesz and sound design by Alex Inglizian. The original score for cello and voice was composed by Tomeka Reid. The producer is Chicago’s Pentimenti Productions, a nonprofit founded by Buchbinder.

Hairy Who & the Chicago Imagists was shown recently at the Museum of Contemporary Art and Block Cinema at Northwestern University. Hairy Who has had limited showings in a few other cities and at film festivals and will have two showings as the RISD Museum in Providence, RI, this fall. It also will have a one-week run at the Gene Siskel Film Center in Chicago in late September. Watch the Siskel website for dates. For more information, see http://pentimentiproductions.org/

On a related note, the Ed Paschke Art Center in Chicago’s Jefferson Park neighborhood opens to the public June 22, which would have been the artist’s 75th birthday. Paschke was a member of the Hairy Who/Chicago Imagists group. The center, located at 5415 W. Higgins Rd. near the Jefferson Park Transit Center on the Blue Line, will be open 10am to 7pm seven days a week. Admission will be free, in keeping with Paschke’s desire for his art to be accessible to everyone. For more information, call 312-533-4911 or visit the website.
This article previously appeared in gapersblock.com/ac/