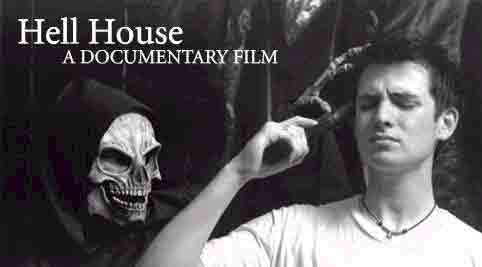 Hell House is a documentary about Dallas&#146; Pentecostal Trinity Church and the controversial haunted house that it puts on each Halloween. In depicting a gay man dying of AIDS and cursing God for it, a girl who attends a rave and has only herself to blame when she is raped, and a teenage school shooter all being dragged off to hell for their sins, the church hopes to make the 12,000 attendees each year see the light.

In today&#146;s climate, a movie like Hell House cannot help but raise issues of religious fanaticism. Despite having always been among the most zealous of Protestant Christian denominations, Pentecostals would certainly be repulsed by any comparison to Islamic fundamentalist members of the Taliban or Al Qaeda. The exploitation of stereotypes for a haunted house is, of course, on a completely different moral footing than the oppression of women or terrorist bombings.Yet what they have in common is an unqualified devotion to a divine cause, the intensity of which may frighten others who do not share their beliefs. The problem with unquestioning belief in abstract absolutes is that performing just about anything in the name of that belief becomes justifiable in the mind of the believer. If one thinks that the alternative to Jesus&#146; salvation is to spend eternity being replayed one&#146;s worst fear or bathing in rivers of lava as Trinity&#146;s Pentecostals do, then no wonder they easily excuse their tactics to convert.

The Trinity Church people are deadly earnest in their warnings about the declining state of society, and were Hell House a Michael Moore movie like Roger & Me or Bowling for Columbine, the parishioners would be ripe for ridicule. They indict the innocuous Harry Potter and fantasy games like Magic: The Gathering as Satanic while talking about the &#147;dark side&#148; with a straight face only a Star Wars fanatic could manage.The actual Hell House scripts sound like overly expository Ed Wood dialogue with dramatic elements trafficking in television show cliches.

It is to director George Ratliff&#146;s credit that he refuses to exploit the Trinity folks or depict them as freaks. The Pentecostals speaking in tongues and laying on hands is all presented matter-of-factly and without judgment. And aside from this, these people seem ordinary in every other way except the terms in which they couch reality. Alex, a beautiful blond cheerleader, blames her mom&#146;s adulterous affair on the presence of the devil. Her father cites God in action when one of his infant son&#146;s regular seizures ceases. Another parishioner is actually a professional wrestler but how he reconciles his presentation of violence with his religious beliefs remains a mystery. Nearly all of them believe the end times are near and that the world is the worst that it has ever been.They see that as bad on the one hand, but good on the other because it means Christ will soon return and take his believers away to heaven.

The documentary follows all the procedures it takes to get Hell House up and running from the auditions to set construction to rehearsal. Finally, the fateful night arrives. Some of the audience is actually frightened while others chuckle at a &#147;bloody&#148; botched abortion or the drunk drivers hauled off to the underworld. At the end of the Hell House experience, the audience is given a choice to enter a door for prayer or to go home, a choice they are told which is between heaven and hell. While the Pentecostals admit that their ministry is in part driven on fear, they also insist they are not guilt tripping people into believing, although it looks like that is precisely what they are doing.

The one time in the film when the Trinity folks have their philosophy directly challenged is from a group of teenagers who have just walked out of Hell House. They are not the most articulate opposition, preferring obscene gestures to civil discourse, but they make at least one interesting point, that a morality that is so black and white misconstrues a basic understanding of human nature, something fairly evident in the reductive, simplistic, and some would say insulting dramas Hell House puts on.Yet the Pentecostals&#146; approach seems to work completely for them.They are essentially compassionate people living each day celebrating their God, even if the form of that celebration strikes others as being not so far from black magic rituals.They have no qualms with dispensing with premarital sex and value their fundamental squareness as a virtue.