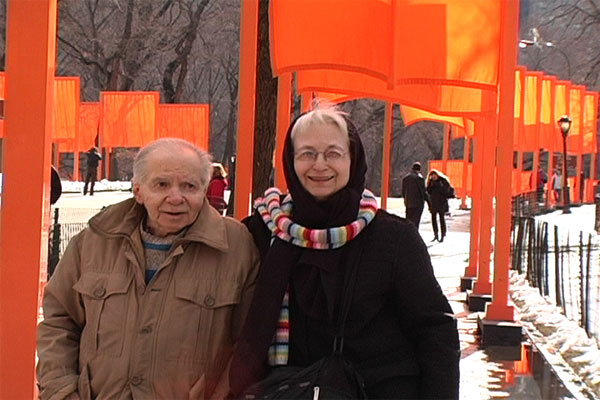 Herb and Dorothy, an award-winning documentary, tells the extraordinary story of two ordinary people of moderate means who have come to rank among the world’s top art collectors.

Herbert Vogel, a postal clerk, and Dorothy Vogel, a librarian, began collecting art in the early 1960s. Minimal and Conceptual art was little known and less respected then, allowing Herb and Dorothy to buy small works of then unknown artists.

They lived on Dorothy’s salary, leaving all of Herb’s post office wages available for art purchases – so long as the pieces were affordable and would fit into their small one-bedroom Manhattan apartment.

Within these limitations, and with little formal training, they proved themselves curatorial visionaries; many of those they supported and befriended went on to become world-renowned artists, including Sol LeWitt, Christo and Jeanne-Claude, Richard Tuttle, Chuck Close, Robert Mangold, Sylvia Plimack Mangold, Lynda Benglis, Pat Steir, Robert Barry, Lucio Pozzi, and Lawrence Weiner. Most of these artists appear in the film.

First time director Megumi Sasaki has excelled at capturing the Vogels’ warmth and dedication to artists and their art. Often scenes were shot in the Vogels’ tiny kitchen, permitting the audience to observe the Vogel’s daily life and their intimate conversations.

Many scenes are of the Vogels and their now famous artist friends. It’s hard to imagine the down-to earth unassuming Vogels being good friends with artists such as Christo and Jeanne-Claude, but they are.

Director Sasaki had difficulty understanding why the Vogels liked certain artists or artworks, since they answered only, “…because we like them,” or “…because they are beautiful.”

Lucio Pozzi, the very first artist Sasaki interviewed, responded to her dilemma, saying, “That’s why the Vogels are very special. Why should you explain art? What’s the need to verbalize art? Herb and Dorothy only look, look and look. That’s their way of communicating with art and artists.”

Sasaki then started paying attention to how the Vogels look at art, instead of how they talk about it. Although Herb in particular doesn’t talk much, the intensity in his eyes is all the communication necessary.

Sasaki also explores the Vogels’ access to art. The film illustrates that one need not be wealthy to enjoy and collect art. The Vogels’ advice would be: trust your instincts; don’t follow trends or take advice from others.

After thirty years of meticulous collecting, the Vogels managed to accumulate over 2,000 pieces, turning their minuscule one bedroom apartment into a warehouse so jam-packed that there was barely room to walk.

In 1992, the Vogels shocked the art world by moving their entire collection to the National Gallery of Art in Washington, DC. The vast majority of their collection was given as a gift to the institution. Many of the works they acquired appreciated so significantly over the years that their collection today is worth many millions of dollars. There are some inspiring shots of the diminutive Vogels in their imposing, almost majestic Herbert and Dorothy Vogel Collection.

Herb and Dorothy celebrates their power of passion and love of life. The Vogels’ unpretentious independence and genius is awe-inspiring. The warmth Herb and Dorothy have for each other and for their artist friends shines throughout this remarkable film. As the film progresses, we become captivated by the enchanted existence the Vogels have made for themselves.

With too many newly collected works to keep, the Vogels and the National Gallery of Art decided to launch a national gift program, The Dorothy and Herbert Vogel Collection: 50 Works for 50 States that will distribute 50 works from the collection to a selected museum in each state.