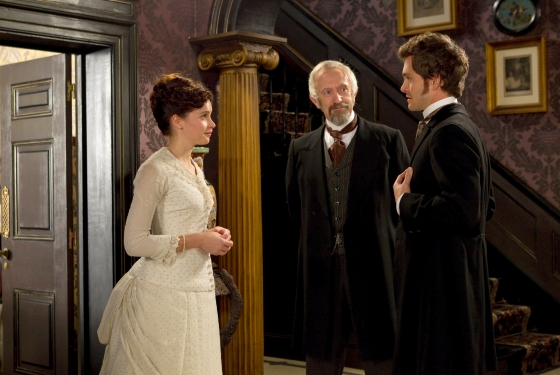 Before the Hammer’s introduction, physicians produced female “paroxysms” by administering “pelvic massage” by hand. The production of female orgasm was not regarded as a sexual matter. Rather, women were believed a) to be incapable of orgasm; and, b) given to “hysteria,” a condition caused by a disorder of the uterus, encompassing states such as anger, depression, restlessness, and insomnia. Large numbers of women were thought to be affected.

“Hysteria” fictionalizes the character of Granville (Hugh Dancy) to create a romantic comedy with social overtones. Granville–Mortimer–is a struggling young doctor whose belief in “germ theory” and sympathy for the oppressed get him fired from his hospital position. When he discovers that a Dr. Dalrymple (Jonathan Pryce), a busy specialist in “women’s medicine,” is in need of–er, another pair of hands–to help in his practice, he jumps at the chance.

Mortimer also encounters Dalrymple’s two daughters: Emily (Felicity Jones), a conventional beauty with conventional achievements–the piano, an interest in phrenology (a study of bumps on the skull)–and Charlotte (Maggie Gyllenhall), a high-tempered rebel with more interest in social reform than social graces. Charlotte works in a settlement house for the poor; of course, Daddy doesn’t approve. Though Mortimer is soon engaged to the “womanly” Emily, we know all too well how things will work out….

When Mortimer, with the aid of his friend and benefactor, Edmund St. John-Smythe (Rupert Everett), develops Granville’s Hammer (it’s not referred to by that name in the film), he not only multiplies the number of patients that can be served in Dr. Dalrymple’s practice, he also gets a way of dealing with his occupational injury: hand cramps.

Obviously, the whole subject lends itself to slightly smutty humor, and director Wexler (“Ball in the House,” “Finding North”) lays it on with a heavy hand, you’ll pardon the expression. We see a few too many giggly, satisfied middle-aged patients, too many smirky references to what’s going on under those voluminous Victorian skirts.

“Hysteria”‘s production values are top-notch. The overblown interiors and elaborate, constricting dresses nicely convey the period’s emphasis on abundance and display. Only Charlotte’s relatively functional, drab-colored clothes give evidence of more utilitarian values and emphasis on function over fashion. The growing use of electricity, not only for vibrators, is also hinted at: when a character acquires a telephone, another inquires, “Do you think it will catch on?”