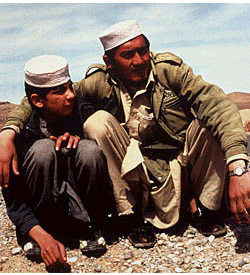 Michael Winterbottom’s In This World is a film of faultless intention that falls short of providing the emotional impact for which it surely aimed.

It’s impossible for anyone who is reasonably informed to be unaware of the plight of refugees around the world. Constant upheaval in Africa and the mid-East has displaced whole towns and ethnic peoples from their homes to the horrific conditions of camps where they live their days without adequate food, water, health care, employment opportunity, or hope.

For most Americans and West Europeans all that is far away and mostly out of mind; some even develop anti-immigration biases in hope of keeping these realities far from home. The refugees become invisible in the same way the homeless have–we tsk, tsk in sympathy (or annoyance) and move on about our business. As George Bush’s wars in Afghanistan and Iraqnow evolve into endless guerilla skirmishes, civil unrest and general chaos, Winterbottom (The Claim, 24 Hour Party People) points out that while 7.9 billion dollars was spent on the bombing of Afghanistan, assistance for refugees has been on a far stingier scale.

In This World uses a somewhat uncomfortable format–a fictional story (with roots in factual situations and much improvised dialogue)) made in the style of a documentary. Jamal is a 16 year old Afghan orphan living in the huge Shamshatoo camp across the border in Pakistan. (The first wave of refugees to this camp came when the Russians invaded Afghanistan; the second wave followed the American bombings in 2001.) When Jamal’s uncle decides to send his son, Enayat, to London, in search of a better life, Jamal angles his way into the journey by providing the contact with refugee smugglers and himself as the obvious companion for his cousin since he speaks English and his cousin doesn’t.

The film follows them on their perilous overland journey–Peshawar to Quetta to Tehranto Istanbul to Trieste to the Sangatte refugee camp in France and finally to London. There’s a chain of contacts reminiscent of the Underground Railway of U.S. history. Occasional kindnesses are received, but money is almost always demanded andlanguage barriers make the sense of isolation palpable. There is constant fear of being caught and sent back. A profound sense of dislocation sets in as they ride pickups, buses, shipping containers and boats, hike through arid desert at one point and brutal winter mountain snows at another.

Winterbottom shot the film on digital video, often with handheld cameras, emphasizing a sense of immediacy and the reality of the experience of these two young men. The nonprofessional cast is led by young Jamal, who has considerable charm and an engaging sense of humor. But Winterbottom never develops Jamal’s character beyond the superficial and Enayat’s not at all. The treacherous journey they follow is skillfully depicted, but its impact–and the discouraging British asylum rules at its end–have more a didactic thana dramatic quality to them. The intention of In This World appears to be to energize people around the asylum issue, but it doesn’t deliver the visceral punch needed to win converts.