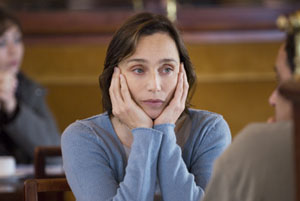 French novelist and screenwriter Philippe Claudel’s debut effort as a director is causing quite a stir in movie circles, much of it due to a powerful performance by Kristin Scott Thomas, who plays a woman who has just been released from prison, and who has gone to live with her sister in the northeastern town of Nancy, France. It’s a magnificently contained performance that solicits our engagement through the slightest gestures—the biting of a lip, the penetrating hollowness of a gaze, the inhaling of a cigarette as if cancer were a welcome guest. It’s the performance of a face and a body stripped of the life force in the film’s beginning, a mesmerizing portrayal of a shell of a woman whose transformation into a more engaged version of a human being occurs almost imperceptibly. It’s a performance of great honesty and craftsmanship. Kristin Scott Thomas allows herself to look awful, her hair limp and her unmade face showing the lines of middle age, her expression devoid of life. But even looking as bad as she does, there is something exquisite about that face, those intelligent eyes, that aquiline nose and wide expressive mouth, that makes us want to look at her forever.

Ms. Scott Thomas plays Juliette, a woman who, we learn about half an hour into the film, has just spent fifteen years in prison for the murder of her six-year-old son. Her sister, Léa (a bit too earnestly played by Elsa Zylberstein), has agreed to take her in to help her re-integrate into society. Léa had no contact with Juliette during her incarceration, a fact that we find out later has to do with their parents’ decision to cut Juliette out of their lives after the murder. Lea’s need to help her sister comes from a yearning to return to a time in their childhood when they were very close, and an ordinary human desire to love one’s sister. Still, Lea’s feelings toward Juliette are complicated by other influences, not just the crime she committed, and the mystery behind it, but also the fading of her memory of the sister she once knew. Lea’s hesitance isn’t helped by Juliette’s insistence on remaining distant, and her husband’s quite understandable mistrust of a convicted child murderer living in the same house with them and their two young daughters.

Juliette is terse, even rude, in her initial encounters with this family that she is suddenly once again a part of. It’s as though she can’t deal with any warmth that they extend towards her, any desire for engagement, and she is brusque in her rejections. She’s really a cold bitch to be around, and our initial reaction is one of dislike; we even grow suspicious that she may indeed be a bit off.

The way Mr. Claudel introduces Juliette is intentionally ambiguous. There is a Hitchcockian style to the first third of the film that actually invites a negative interpretation of Juliette’s demeanor. But this stylistic element slowly gives way to a more benign, naturalistic style of filming that methodically displays the more ordinary, even mundane, details of living—going to the park or the swimming pool, baking with the children, going to the art museum with one of Lea’s colleagues, Michel (a very warm and confident Laurent Grevill). Michel’s attraction to Juliette is one of a series of experiences that nudge her out of her self-imposed stupor. Mr. Claudel’s decision to film discreet incidents in a pared down style (there is hardly a discernable arc in the plot) moves the story forward so gradually that by the film’s final scenes, the audience is suddenly aware that Juliette has been seduced back into the world of the living. It’s to Mr. Claudel’s and Ms. Scott Thomas’ credit that we barely saw it coming, and the transformation is that much more acceptable, even fascinating. Before our very eyes, a person has come back from the dead. Juliette has metamorphosed into an individual, a person who needs others, and accepts being needed by others.

Our fascination with Juliette’s rebirth almost leads us to forget the terrible crime that she committed. Despite our ethical selves, we start rooting for her; as she thaws, our sympathies mount. It’s an odd feeling, to start caring for someone who murdered her own son, and this seems at first to be the film’s main theme—acceptance of others, even those who at first appear different. But Mr. Claudel decided not to leave the narrative, or the ethics around it, loosely tied, and instead provides a neat resolution to the mystery behind Juliette’s horrible act, which makes her metamorphosis less extraordinary, and our acceptance of her “new self” more comprehensible. The revelation comes as a shock in the film’s penultimate scene, and poses as many questions as it answers. One thing is sure, however, and that is its power to exonerate Juliette of her sin. And this, in turn, puts our feelings about the film into question, even as it brings Juliette’s character to light.

Mr. Claudel has said in interviews that it is not Juliette’s decision to end her son’s life that is her greatest sin. It was her decision to deny life, especially the gift of the love of others to help her in the face of tragedy. This certainly comes through in the film, and is probably why audiences have found it so appealing. But the murder mystery plot device and its surprising resolution might seem a bit too calculating to some, if not downright disappointing.