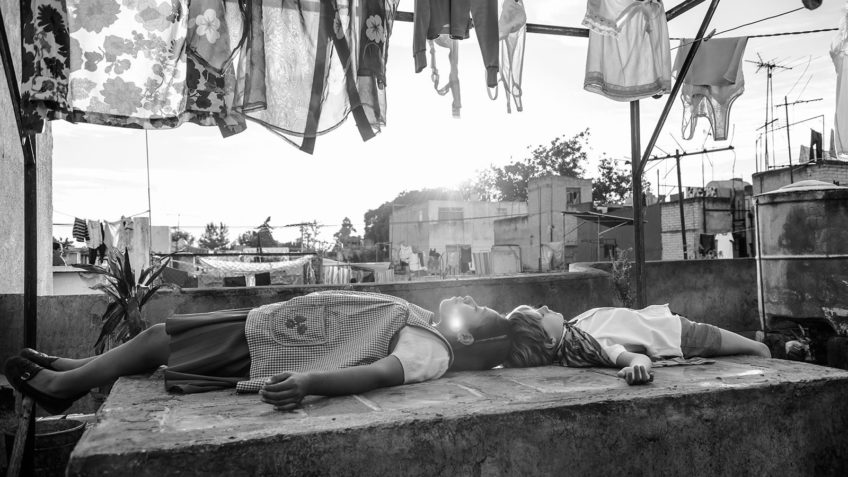 Film critics are by-in-large naysayers. Glass half-full kind of people. There is always something lacking in this year’s films. I remember going to Sundance and even before the films started screening people would automatically say, “not as good as last year.” I beg to differ. In any given year there are beautiful, inspiring and inspired films. Yes, there are issues in the film business—as always. Too many comic book movies, too many sequels, not enough women directors, etc. Netflix and streaming is its own problem. But as long as directors, producers, writers and actors are struggling to put their vision on screen (whatever size it is) there will be great movies. Some things never change. For me, these were the best of the decade.

No film in the past decade has haunted me as much as Alfonso Cuaron’s Roma. People have said to me, well, there’s no story, it’s boring. To that I have to say, is life boring? It was daring of Cuaron to shoot this three-hour mediation on his formative years in black and white, but somehow that approximates the color of ones memories more accurately than color. For film buffs, this is a special treat since it calls to mind everything from Italian neo-realism to the French new wave. Episodic filmmaking at its best.

Martin Scorsese in an elegiac mood. Gone is the thumping Rolling Stones score in favor of the ’50s moody “Smoke Gets in Your Eyes.” It’s an epic film, spanning four decades, about what happens to gangsters when they get old. The answer is: they die like everyone else. But how they get there is masterfully presented. The film is blessed with a dream cast: Scorsese stalwarts Robert DeNiro and Joe Pesci as a mafia hitman and his lowkey boss, and Al Pacino as the volatile labor union leader Jimmy Hoffa. The intertwined corruption of organized labor, organized crime and politics, and how they inform the American identity of the last half of the 20th century, makes for a potent package

Fitting that this is one of the best of the decade since it took more than a decade to make. Taking its cue from Francois Truffaut’s Antoine Doinel films and Michael Apted’s magnificent “Up” series, Richard Linklater filmed a little each year for 12 years until his six-year-old boy became a college-age searcher. It took great commitment and a big imagination to make this film, and for that alone it deserves a place in film history.

Barry Jenkins’ Oscar-winning film about a black youth finding his way in rural Florida is told in three parts as young Chiron grows to maturity. However, his first guide in life, a loving but heartbreaking Mahershala Ali as a neighborhood drug dealer, is a complicated mentor who both lifts and scars young Chiron for life. And on top of that, Chiron must deal with his homosexuality in a culture not open to it. A restrained and beautiful film.

What starts out a class-conscious comedy evolves seamlessly into a bloody indictment of the rich. Korean director Bong Joon Ho is in full control of tone as he hooks the audience and then quite literally stabs them in the back with a knife. If this film doesn’t shake you up, nothing will.

This is plain and simple a lovely movie. It’s is the rare instance when a coming-of-age story involves a young women, in this case an Irish lass brilliantly played by Saoirse Ronan who comes to America in the mid-’50s to make her way in the New World. Torn between the allure of the familiar in Ireland and the freshness of New York, she ultimately makes the right decision, but not without some deeply felt and very believable growing pains along the way. Kudoes to director John Crowley and writer Nick Hornby for getting the delicate tone just right.

This is the kind of the socially conscious movie that Hollywood used to turn out by the dozen in the ’50s and ’60s. Ripped from the headlines, as they used to say. Tom McCarthy’s step-by-step procedural of how the Boston Globe cracked the abuse case of children by Catholic priests in the Boston area is a taut mystery with a kick. And after it’s over, in the credits’ crawl, the most chilling part is the list of implicated priests that seems to go on and on.

I wanted to give a shout out to the great Agnes Varda, who died this year. With what appears to be the simplest of techniques, she engages an audience in her shaggy dog story as she travels across France with the photographer JR, paying her respects to the lives of ordinary working people. But then no one is really ordinary, and Varda proves it. What may look simple is really a great work of art, and the culmination of her extraordinary body of work.

Ashgar Fahadi’s examination of life inside Iran that looks a lot more complicated than most outsiders would imagine. These are people just trying to do their best and live their lives within the confines of an Islamic State. The issues within a marriage are magnified by the limitations of the law leading to manslaughter and a situation in which there is no right answer and no winners. The power of film to penetrate the mysteries of another culture is beautifully on display here.

Raoul Peck spent years trying to get the rights to James Baldwin’s writing, and them figuring out how to use it. The result is a one-of-kind documentary told exclusively in Baldwin’s words read perfectly by Samuel L. Jackson. That Baldwin’s outcries about racism in America still resonated today shouldn’t come as a surprise. Honorable Mention: Shoplifters; The Shape of Water; Lady Bird; First Reformed; Minding the Gap; For Sama; Dawson City; Black Panther; The Social Network.