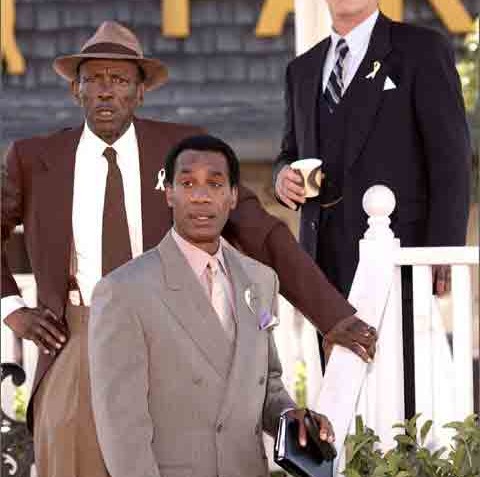 It was a hot summer night in June, 1998 when three White men chained a 49-year-old Black man behind their pickup and dragged him nearly three miles down a country road to his death, a process that tore off an arm and shoulder and beheaded him. The place was Jasper, Texas, a small town in the Texas Piney Woods that called itself the "Jewel of the Forest."

The Showtime movie based on this event, starring Jon Voight as the White sheriff Billy Rowles, and Lou Gossett Jr. as R.C. Horn, the town&#146;s Black mayor, premieres almost five years to the day after the incident.

Americans has, regrettably, become desensitized to media reports of hate crimes. The events in Jasper were at the forefront of the national consciousness for a few days or weeks, as were other racist or homophobic hate crimes, before they faded from people’s minds. But what was different about the Jasper incident was the way that the community&#151;Black and White together&#151;handled the aftermath. And that is what Jasper, Texas is about.

The movie shows the initial confusion, then denial on the parts of both sectors of the town&#146;s leadership, neither of which wanted to believe that the incident truly reflected the town&#146;s values and race relationships. But as national and international media, the Ku Klux Klan, and the Black Panthers descend, the townspeople are forced to admit that, although much has changed since the days of Jim Crow legislation, much also has not. Both sides must confront the history of race relations in the town, as well as deeply-held beliefs, both about the town and about the opposite race.

Screenwriter Jonathan Estrin along with executive producer Michael Greene, and director Jeff Byrd (Seventeen Again,Final Breakdown) have delivered a believable, well-paced and thought-provoking product with this movie. Except for a few details (the victim, James Byrd, Jr. is portrayed here as being, perhaps, in his early 20s; and the Klan and the Panthers did not actually show up in Jasper on the same day), what the viewer sees in the movie is an accurate portrayal of the events that occurred.

Perhaps the only thing lacking in the film is any attempt to understand how the perpetrators&#151;three local young men just barely out of their teens&#151;could have committed such a heinous act. Here the movie&#146;s producers may have fallen prey to the same form of denial that originally affected the town leaders. In her book about the Jasper incident, A Death in Texas, journalist Dina Temple-Raston takes a hard look at Jasper in the decades before the dragging and concludes that for young men like the three perpetrators, economic conditions were so bad that there was little hope for jobs, for a future, or for a better life. They were "restless and unable to break free of [the poverty] that had become part and parcel of their lives. There was little to do except hate," Temple-Raston says.

Jon Voight and Lou Gossett Jr. turn in stunning performances in Jasper, Texas and the presentation of the story is dramatically strong.