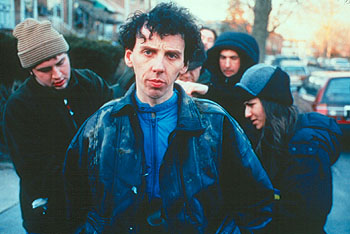 The 1997 release of Gummo, Harmony Korine’s directorial debut, met with the sort of warm reception usually reserved for war atrocities and three-hour Kevin Costner epics. Janet Maslin of the New York Times famously declared it the worst movie of the year, and most other critics – at least those who bothered to review it – followed suit. The perception that Gummo was a grungy, exploitative freak show was enhanced by the film’s trailer, which played up those visual elements that lent themselves to such an interpretation. An actual viewing of the movie, however, revealed a much more gentle-tempered and embracing attitude towards its offbeat, living-in-the-fringes characters than Korine’s critics were willing to extend to him. And the fact that Korine is clearly a born filmmaker, with a full-blown visionary style, got lost in the shuffle .

Korine’s new film Julien Donkey-Boy opens with a certificate of approval from Dogme 95, the austerity movement launched several years ago by a Danish film collective headed by directors Lars von Trier and Thomas Vinterberg. The one common element among all the Dogme 95 participants seems to be their willingness to break the rules of their own manifesto, which strictly forbids the use of such Hollywood conventions as tripods, unsourced music, and lighting and props not found on location. Korine is no exception, and has confessed to such transgressions as using a fake belly for a pregnant character played by Chloe Sevigny. Whether Dogme 95 is a sincere movement or a put-on has been the subject of debate, but the truth likely lies somewhere in between.

Like Gummo, Julien Donkey-Boy eschews traditional narrative in favor of an improvisatory, kaleidoscopic approach. Ewen Bremner (Trainspotting) stars as the schizophrenic Julien, whose braying manner of speech explains the rest of the title. Julien lives with his brother Chris (Evan Neumann), an aspiring wrestler, sister Pearl (Sevigny), whom he has apparently impregnated, and hypercritical father played by German director Werner Herzog (My Best Fiend). Other characters include the denizens of a school for the blind, an armless man who does card tricks with his feet, and a rapping, self-described "black albino from Alabama." Charges of exploitation will no doubt arise again, but these criticisms come with their own built-in condescension. There’s nothing inherently wrong with casting individuals who, say, happen to be missing limbs, and it’s insulting to suggest that such people are mere pawns in the hands of a sick manipulator. In fact, these non-professionals provide some of the movie’s most upbeat, joyous performances, belying the notion that they are being used as little more than living props.

As for the professional cast, Herzog has some funny moments (guzzling Robitussin from a shoe, explaining the ending of Dirty Harry) but eventually his abusive shtick grows wearisome. And while Sevigny never gets a firm handle on her character, Bremner is nothing short of astonishing as the title character. In one of the most convincing portrayals of mental illness in recent memory, Bremner invests Julien’s incessant, run-on babble and hair-trigger mood shifts with palpable desperation. At the same time, there’s an inherent sweetness to Julien that makes his struggle with his inner demons all the more unsettling, and Bremner never loses sight of that.

Most impressive is the total immersion experience the director creates with the limited tools at his disposal. Shot on digital video, with blown-out colors and punishing graininess, Julien Donkey-Boy has the look and feel of something unearthed in an archeological dig – a primitive piece of folk art. Using an array of techniques – freeze-frames, jump-cutting, distorted audio effects – Korine creates an organic texture totally at odds with the implied sterility of digital filmmaking. He is able to find the beauty in even the most squalid of settings.