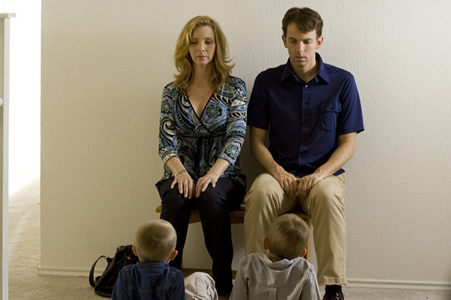 Kabluey is original in the sense that Scott Prendergast wrote, directed, and starred in it. In fact, the inspiration for the film was Prendergast’s war-widowed sister, her two sons and Prendergast’s unsuccessful attempts as their babysitter.

Kabluey is remarkable in that it is Prendergast’s first feature film. He has created appealing but imperfect and alienated characters in whom we find humor and pathos. His direction, writing and acting skills all shine. I hope that we’ll see much more of this exciting talent.

He’s created a number of short films, which he wrote, directed, produced and edited, as well as frequently played all the roles (some are available on DVD). His two shorts, Anna Is Being Stalked (2002) and The Delicious (2003), attracted a lot of attention.

Kabluey stars an ensemble cast led by Lisa Kudrow (Friends, Wonderland, Romy and Michele’s High School Reunion). She is brilliant as the lonely, crumbling, mother whose National Guard husband has been in Iraq for nearly two years. Her inability to restraint her two bratty, rambunctious boys is merely a symptom of her hopelessness and helplessness.

Her ne’er-do-well, thirty-something, loner brother-in-law, Salman, outstandingly played by Scott Prendergast, shows up to help with the kids. Since he is sorely lacking any child-rearing skills, Salman takes a job handing out flyers, wearing a hot, ridiculous-looking, giant blue corporate mascot costume.

There are some beautifully filmed yet poignant scenes of the costumed Salman on the side of an empty road, in the summer heat of exurbia, surrounded by dry fields and blue skies, waiting for someone, anyone, to take his flyer.

Ultimately, the mascot suit’s anonymity shakes Salman out of his passivity and isolation. He begins to engage with others and to express concern for his family in surprising ways. In Kabluey, as in life, however, people rarely change completely, yet small changes may be the beginning of huge differences.