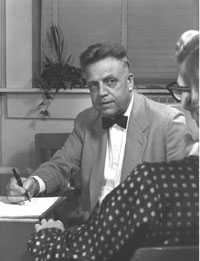 At one point about midway through the last century, Dr. Alfred C. Kinsey was the second-most recognized man in the country, outside of the president. If this seems strange to a generation that came of age after the social and sexual revolutions of the sixties, born into a world in which the Kinsey Report, the Hite Report and the Drudge Report all vie for space in the popular unconscious, help is on the way. The last of three major pieces in the past six months to deal with the sexologist and his legacy&#151;after T.C. Boyle&#146;s fascinating novel The Inner Circle and Bill Condon&#146;s justly-lauded biopic Kinsey, starring Liam Neeson&#151;PBS&#146;s stentorian history series The American Experience now presents a program on Dr. Kinsey&#146;s sex studies just in time for Valentine&#146;s Day.

It&#146;s not entirely clear as to why the sudden interest in Kinsey&#146;s life, although it&#146;s certainly fitting that the promise of four more years of George W. Bush would send all American anti-moralist crusaders, past or present, up the flagpole in a hurry.And though he&#146;s less well known in today&#146;s world, this prototypical sexual revolutionary&#151;who maintained a strong marriage despite increasingly strong homosexual and masochistic tendencies&#151;is certainly worthy of history.By all accounts the man was an absolute contradiction in terms, and all three portraits center on the fresh-scrubbed scientist in a bow-tie who nonetheless tirelessly advocated for the utter diversity and variety of human sexual response.

A gall wasp biologist at Indiana University, Professor Kinsey&#151;or Prok, as he was known to his graduate students&#151;became concerned with the frightful lack of sex savvy he couldn&#146;t help but notice (not least in his own home; the PBS program notes that sex between Kinsey and his wife was all but impossible until she had minor surgery performed on her hymen).His father was a fire and brimstone preacher and, in all likelihood, this spurned Kinsey&#146;s obsession with sex as much as nature&#146;s infinite possibilities, though Prok&#151;good anti-Freudian that he was&#151;would have discarded such psychology as haphazard and irrelevant.

The American Experience program&#151;narrated, refreshingly, by Campbell Scott&#151;differs from the novelization and the Hollywood version in tone, though the content of the stories hardly changes. Ostensibly factual in its biography, the television program avoids all cautionary tale pitfalls that slightly hamper both the film and the novel, and the American Experience program does its best to free its subject from the typically stuffy confines of public broadcasting. To be expected, it combines stock footage from the forties&#151;clunky Packers cruising down rural roads and coeds jaunting across neo-gothic campuses&#151;with home movies (though not of the explicit variety for which Kinsey would become infamous) and talking head footage from Kinsey&#146;s surviving family members, biographers and those who worked with him at Indiana&#146;s Institute for Sex Research.

The program&#146;s one bit of controversy deals with this last group, as it touches on the details of the well-known bit of wife-swapping among Kinsey&#146;s immediate proteges. Kinsey encouraged sexual openness among his underlings, but when Paul Gebhart got too attached to Clyde Martin&#146;s wife Alice, Prok was forced to step in.According to one source, she never forgave him.The PBS program, which features testimony from both Gebhart and Martin, cheats in its retelling of the events, allowing Gebhart to give a full account from memory, while Martin&#146;s side of the story goes unheard.The two men continued on as colleagues for another decade, so it stands to reason that they each made peace with the affair, but in only giving one side, the program ends up raising more questions about Prok&#146;s influence on his &#147;inner circle&#148; than it answers.Perhaps this is inevitable.

For all the highly publicized Kinsey material in the media this year, the man is no less an enigma.Fittingly, the program ends with Kinsey presiding over a televised speech, declaiming, as he so often did during his life, the absolute need for science to free mankind from the prison of moralistic ignorance.Even in view of the great strides that have been made since his death, Dr. Kinsey&#146;s legacy is as important today as ever.