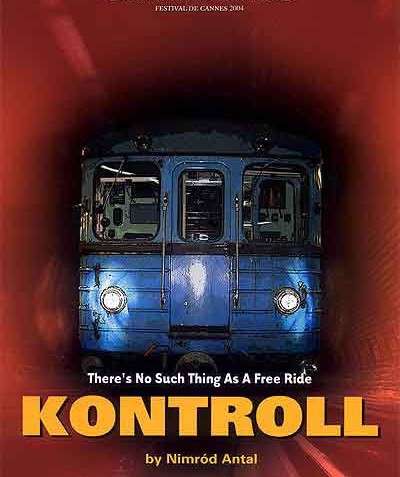 Hungarian Nimrod Antal creates a vivid first impression with his debut film, Kontroll. Garnering deserved recognition at the Cannes Film Festival, Kontroll is original, imaginative, and, most of all, work that demonstrates a powerful filmic sensibility in this thirty-something director.

Shot in its entirety in the Budapest subway system, the movie has a dark look, blacks and blues given an unhealthy sheen under fluorescent lighting. Banks of steep escalators rise to the unseen world above. Trains and people come and go–it’s a place of transiency and impermanence and more than a little mystery.

Teams of ticket inspectors are assigned around the far-reaching system, stopping passengers and asking to see their tickets. As often as not, it seems, the passengers don’t comply. Sometimes the inspectors take bribes in money or sex, sometimes they are just confounded by the hostility or indifference of the passengers. A pimp offers one of his girls in lieu of the ticket he didn’t bother to buy. Communication is difficult at best, hilariously highlighted by a group of Japanese tourists who photograph the inspector while being totally unresponsive to his request for their tickets. Another passenger has a stutter of such severity that he cannot respond to the inspector. There is no respect for authority; nobody seems to take these officials seriously and they seem understandably uneasy in their roles.

This contained underground world is a metaphor, of course. It’s both a netherworld and a reflection of the real world, a place for rejects, dropouts, those not up to the challenge topside. A train conductor, one of the few warm characters, is a drunk who lost his job driving surface trains due to a presumably drinking-related accident. One inspector suffers from narcolepsy; his head crashes into his greasy French fries as he suddenly falls asleep. Nervous tension is everywhere, quickly erupting into frequent violence. Life is cheap and may or may not be worth living. There are heavy-metal gangs and there’s a disturbingly high number of suicides–people leaping in front of trains.

Or are they leaping? The central character, Bulcs� (Sandor Csanyi), who heads up a team of inspectors, sees (or imagines) a hooded figure pushing victims in front of oncoming trains. There’s deliberately unresolved ambiguity here with the hooded figure lacking only a sickle to confirm his identity as Death. Bulcs� had a promising mainstream career, but dropped out because he worried about how much he worried about being the best. Under a deceptively calm facade, he’s spilling over with unresolved tension, frustration, anger. Over the course of the film, he becomes, both literally and figuratively, the walking wounded, ever more bloody. He plays a Russian-roulette-like game with another team leader in which they race before an oncoming train, putting their lives on the line.

Bulcs� connects with a lovely girl, dressed in a funky bear costume. Might she lead him out of the darkness? Whether she does or does not, Antal has drawn a picture of contemporary urban anxieties, conflict and dysfunction in film terms that vary from Keystone Cops chases to a touch of magical realism to the edginess of classic thriller suspense. It’s all heightened by a pulsating score from NEO. There are moments when the film seems somewhat episodic, but the overall arc of Bulcs�’s story and the inventiveness of Antal’s direction hold it all together.