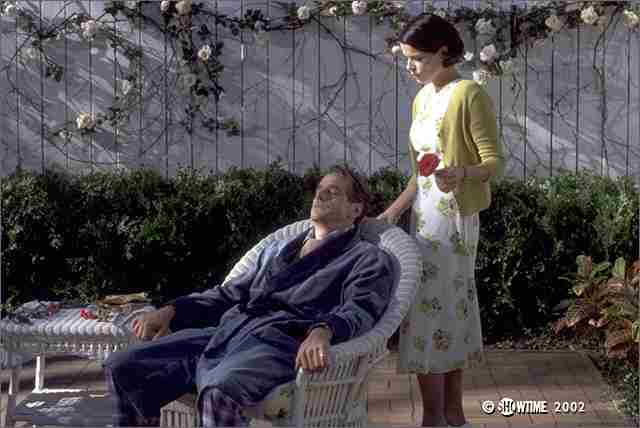 Last Call is an elegiac dramatization of F. Scott Fitzgerald&#146;s final days writing The Last Tycoon, the unfinished Hollywood novel he hoped would restore his reputation. Fitzgerald&#146;s spectacular Jazz Age fame and subsequent slide into alcoholism and obscurity are the stuff of well-trod literary folklore. The end is as familiar as a melancholy bedtime story: On December 21, 1940, the 44-year-old writer suffered a fatal heart attack in the home of his companion and lover, gossip columnist Sheilah Graham. The chronology covered in this Showtime Original teleplay is roughly similar to that of Graham&#146;s autobiography, Beloved Infidel, which became a soapy 1959 film starring Deborah Kerr as Graham and a laughably miscast Gregory Peck as Fitzgerald. However, Last Call has found a surprisingly fresh angle from which to approach its subject. Writer-director Henry Bromell&#146;s script is based on an unpretentious 1985 memoir, Against the Current: As I Remember F. Scott Fitzgerald, written by Frances Kroll Ring, who was Fitzgerald&#146;s personal secretary during the last twenty months of his life. Best of all, Last Call boasts a first-rate performance by Jeremy Irons (Reversal of Fortune, Lolita) as the dissipated novelist.

Irons&#146; lanky frame and chiseled face don&#146;t readily call to mind the doughy lost soul we know from Fitzgerald&#146;s late-career photographs. Nevertheless, he beautifully evokes the &#147;sensual fatigue&#148;&#151;in the apt phrase of biographer Arthur Mizener&#151;that infused the writer&#146;s world on and off the page. Irons flattens out his own British accent in deference to Fitzgerald&#146;s Minnesota upbringing, while retaining a hint of the aristocratic arrogance that seemed parcel of the author&#146;s personality. (Recordings of Fitzgerald&#146;s voice bear an uncanny resemblance to the elocutionary fastidiousness of British-born actor Claude Rains.) Last Call is fully attuned to its central character&#146;s enormous contradictions. Despite ill-health, crippling self-doubts, cycles of binge boozing and drying out, Fitzgerald miraculously succeeded in pulling himself together and writing something that even in its incomplete form is recognized today as a classic American novel. Jeremy Irons brings an almost spiritual luminance to the portrait of a burnt-out writer rediscovering and flexing his creative powers.

Frances Kroll Ring&#146;s brief 150-page memoir is so low-key and self-effacing that it&#146;s not inherently dramatic. Henry Bromell&#146;s script for Last Call consequently resorts to embellishments, some more credible than others. At times, the narrative recalls Akiva Goldsman&#146;s controversial screenplay for last year&#146;s Oscar-winning film A Beautiful Mind, which was &#147;inspired&#148; by a biography of mathematician John Nash. Where Goldsman invented from whole cloth a delusional parallel universe to represent John Nash&#146;s schizophrenia, Bromell fashions for Fitzgerald a late-night series of alcohol-fueled hallucinations involving the writer&#146;s wife Zelda, played here by Sissy Spacek in the passive-aggressive mode she perfected for In the Bedroom. The scenes never quite jell, in part because Spacek is being asked to portray a symbolic projection of Fitzgerald&#146;s inner demons rather than a flesh-and-blood Zelda, who was confined to a mental hospital in North Carolina during the time Fitzgerald was working in Hollywood.

Bromell has better luck transforming Frances Kroll Ring&#146;s modest secretarial reminiscences into a coming-of-age story of unrequited love. It helps tremendously that twentysomething Frances is played with great charm by Neve Campbell (Three to Tango, Wild Things). The real-life Frances states flatly in her book that she had &#147;compassion rather than passion&#148; for F. Scott Fitzgerald. Last Call, by contrast, fabricates a soulful liplock in a parked car and makes the moment all but inevitable. The Frances Kroll of the teleplay&#151;unlike the business-minded amanuensis in her memoir&#151;is an aspiring fiction writer anxious to glean wisdom from her employer. The memoir records no kiss, soulful or otherwise, merely a spurned out-of-character &#147;grab&#148; from a playfully drunk Fitzgerald. But it&#146;s easy to forgive Last Call for romanticizing its source material. (It&#146;s less easy to forgive the teleplay&#146;s curious substitution of Pepsi-Cola in place of Fitzgerald&#146;s well-documented on-the-wagon preference for Coca-Cola.) Jeremy Irons and Neve Campbell are splendid sparing partners. Their characters convey a multitude of veiled emotions. And like protagonists in an elegant Fitzgerald tale, they nourish one another in unexpected and profound ways.