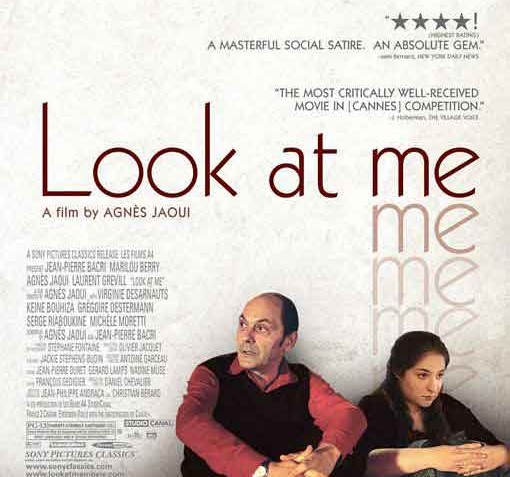 In Look at Me, writer/director Agnes Jaoui and her co-writer and co-star, Jean-Pierre Bacri, have created a complex drama that seems not a minute too long at its nearly two hour running time. They seamlessly interweave the stories of a core group of characters into a perceptive collection of portraits revealing ambition and selfishness–a fascinating group of interrelated people who seem to shift and change with each encounter.

In the opening sequence, Lolita (Marilou Berry), an overweight and insecure young woman, is in a taxi on her way to pick up her father and his young and beautiful trophy wife, Karine (Virginie Desarnauts). The cab driver is as rude and surly as they come and Lolita, after first standing up to him, backs down meekly. But when her father, Etienne Cassard (Bacri), a well-known writer and publisher, gets in the cab, he powerfully tells the driver off, leaving the driver submissive and polite. Etienne starts out seeming like a hero, but in time it becomes clear that he is an insufferably insensitive and overbearing bully who seems not even to like Lolita and is bored by his and Karine’s much younger daughter as well. He cannot abide being other than the center of attention at all times.

Lolita studies voice with Sylvia Miller (Jaoui) who is married to a struggling writer, Pierre (Laurent Grevill). When Sylvia learns that Lolita is Etienne’s daughter, she uses the connection to gain access to Etienne, hoping to advance her husband’s career. The musical angle works well, allowing for Schubert, Monteverdi and Beethoven on the soundtrack, nicely integrated with the story and the mood. But, best of all, Jaoui uses Mozart’s Cos� fan Tutte (as did Mike Nichols in Closer), exquisite music that evokes the complications of relationships between two couples.

Lolita meets a young man, Sebastien (Keine Bouhiza) who is attracted to her ("I don’t like skinny women!"). While she feels like an outcast because of her weight (and her emotionally absent father), Sebastien, too, feels like an outsider because of his Muslim origins. Real affection seems to grow between them, but Lolita is so wrapped up in her own insecurities (and her ultimately annoying self-pity) that she cannot believe anyone is caring for her without an ulterior motive.

In the tradition of French character-based and dialogue-rich films (Rohmer, Chabrol), Look at Me gets under the skin of these varied individuals and reveals them in rich complexity and highly individuated quirkiness. Intelligently written and acted with conviction, the film coolly observes contemporary mores through the varied behaviors of its unhappy characters. But Jaoui also provides wit for comic relief and, without ever slipping into sentimentality, she allows for at least a touch of hope with a romantic conclusion.