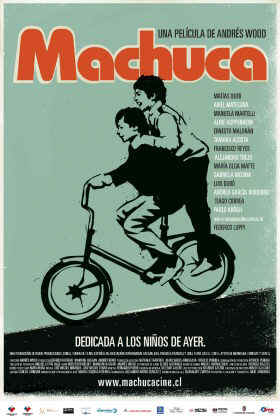 Machuca takes place in Chile, after Salvador Allende, a Marxist and a humanist, was democratically elected president of the country and instituted badly needed economic reforms. (To the everlasting shame of the U.S., under orders from President Nixon and Secretary of State Henry Kissinger, a broad economic blockade was launched and street demonstrations and various dirty tricks were played by the CIA over the next three years aimed at unseating the president. In 1973, in a military coup, Allende was assassinated in his office and Augusto Pinochet took over as dictator, one who stayed in power for seventeen years and under whose regime 3,197 people were killed or disappeared, thousands were exiled, civil rights evaporated and the use of torture was commonplace.)

The film foregrounds the story of a boy, Gonzalo Infante (Matias Quer), from a bourgeois family, against the background of the political events of the day. The priest-headmaster of Gonzalo’s elite private school believed there should be more connection between his wealthy constituency and their disenfranchised, poor (generally dark-skinned) neighbors. With the support of some parents, a group of poor boys are admitted to the school on scholarship. Gonzalo befriends Pedro Machuca (Ariel Materluna) and, in doing so, not only learns to see the "other side" as real people, but learns of the primitive living conditions of the poor in Santiago.

While the film is titled Machuca, it is largely seen through the eyes of Gonzalo and it is his coming of age story. Gonzalo’s overly-affectionate mother is openly engaged in a long-term affair with a wealthy married man who unsuccessfully tries to cultivate Gonzalo’s goodwill. When the politics grow ever more heated, especially well-observed in a meeting at the school with parents from both sides, the social and economic divide is seen to be a seemingly unbridgeable gulf of class resentments. On a broader scale, civil war is brewing, but is deflected by the brutal military takeover.

Throughout, Gonzalo observes with wide eyes; he’s not given a lot to say–the camera shows the events that he sees and skilled direction by Andres Wood puts the viewer squarely in the boy’s place, sensing his growing hurts and alienation. Wood also tries to avoid oversimplifying the issues, showing, for example, the middle class people who supported the socialist changes, but clearly his sympathies are on the side of the Allende reforms.

The film succeeds, too, in fleshing out the central characters, lending credence to their personal experience of historically sweeping events. The tone of the film, though, tends to drone in an overly-earnest tone, without comic relief; it’s dramatic arc tends to flatten in peripheral digressions which also extend its length beyond that sustainable by the narrative drive. Some judicious editing might have made for a more taut drama.

Still, it is history that needs to be be told, Packaging it in the accessible and popular form of a movie will surely gain wider understanding for what happened in Chile and its implications for today’s world.