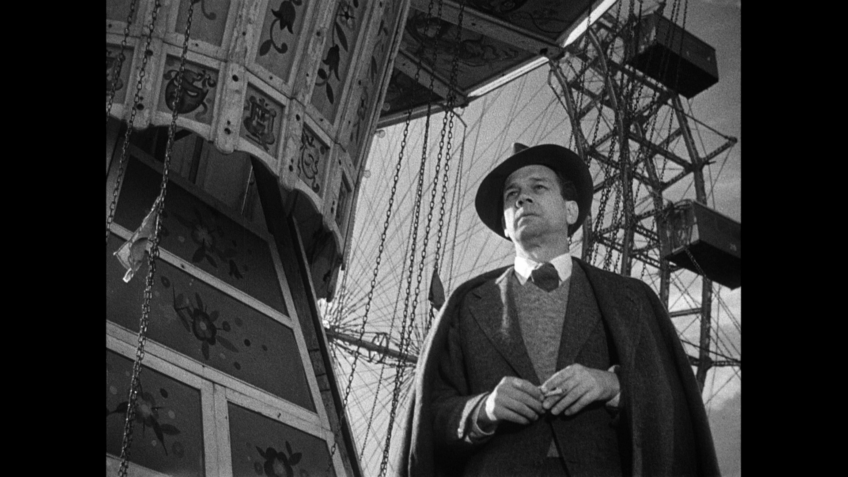 You can now see that fabulous post-war international noir classic, “The Third Man” (1949) in fully restored 4k (4,000 + pixels) resolution. And Graham Green’s meticulous writing, Carol Reed’s innovative directing, Joseph Cotten’s and Orson Welles’ fine acting, Robert Krasker’s Oscar-winning black and white cinematography and Anton Karas’ unique zither music sparkle as bright as ever. The movie will play in theaters (try to find one that can screen it in 4k) beginning June 26, 2015 in the U.S., and, at the end of July, it will be available on DVD and Blu-ray.

“The Third Man” follows Holley Martins (Joseph Cotten), a writer of pulp westerns, as he arrives in Vienna at the invitation of his old friend, Harry Lime (Orson Welles) only to discover that Lime has been killed in a street accident. The investigating officer, Calloway (Trevor Howard) tells Martins about Lime’s unsavory character, but his grief-stricken lover, Anna (Alida Valli) doesn’t believe the stories, so perhaps neither should Martins. Deciding to investigate Lime’s death, Martins remains in Vienna to find an elusive third man who may have witnessed Lime’s accident.

An instant classic and international hit, “The Third Man” won the Palme d’Or at the Cannes Film Festival (1949), the British Film Academy’s best British film award (1950) and an Academy Award for Robert Krasker’s cinematography (1951). Although the only U.S. connections to the film are Cotton, Welles and executive co-producer David O. Selznick, it ranked 57th on the American Film Institute’s list of top American films (1998). The British Film Institute selected “The Third Man” as the best British film of the 20th century (1999).

So what makes “The Third Man” so remarkable? First of all, it has first-class acting. Even though Orson Welles is on screen for only about ten minutes, he leaves an indelible impression. He also wrote the now famous line about the Swiss cuckoo clocks. Joseph Cotton and Alida Valli play their parts outstandingly. Valli remained a well-regarded European film actor during her career, but was never a star in the States.

Director Reed took full advantage of the decrepit condition of post-World War II Vienna and spent six weeks shooting there. The city had been bombed relentlessly. The bombed buildings, piles of rubble and their evocative shadows form a haunting backdrop to the outdoor scenes, particularly at night. Vienna’s division into four occupation zones (U. S., Soviet Union, United Kingdom and France) with four distinct armies, also adds to the chaos that was Vienna. Other scenes, such as those on the Ferris wheel, in the central cemetery and the rat-filled sewers each have a built-in drama of their own.

Graham Green’s screenplay is superb. Greene’s talent for dialogue and suspense shine. The movie has more twists and turns than a rollercoaster. After Greene, Sir Alexander Korda, (co-producer of “The Third Man”) and Carol Reed had worked together on the successful film, “The Fallen Idol” (1948), Korda and Reed asked Greene to write another one for them.

Greene had a glimmer of an idea, which he had written on the back of an envelope 20 years prior. It became the plot line of “The Third Man.” Since Greene was primarily a novelist, and not a screenwriter, he wrote a novella version of “The Third Man” at the same time he wrote the script. In fact, Greene wrote both versions at the Sacher Hotel, where Martins stays in the film. The script and novella are different; Greene preferred the script version, because it was his final version.

Robert Krasker’s quirky cinematography was avant-garde in 1949 and most of it holds up well. For example, he evoked the Austrian food shortages with fleeting shots of hungry and desperate men. His expressionist use of light and shadow help make the film suspenseful. His oblique camera angles and harsh lighting seem a bit clichéd now, but are nevertheless effective in capturing the mood of Martins’ disturbing and disquieting time in Vienna.

Finally, there’s the zither music. While out for an evening, director Reed and some cast members heard Anton Karas, a 40-year-old local musician, play the zither for tips. Immediately struck by the melancholy sound, Karas was signed to compose and perform the soundtrack for the picture. The “Third Man Theme” became an international hit.

One doesn’t need to be a cinephile to appreciate “The Third Man.” And this 4K remastering presents a wonderful opportunity to see it in its highest quality version.