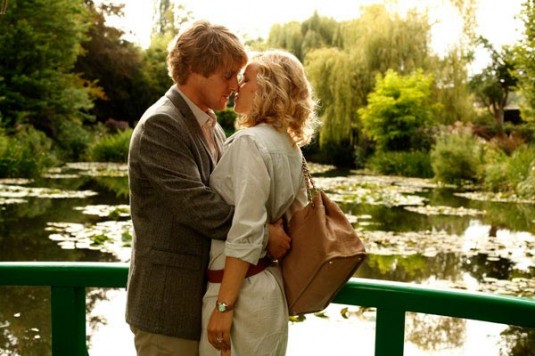 Woody Allen’s latest movie gift, “Midnight in Paris,” combines blithe romantic comedy with fantasy, adds a touch of insight and wraps it all up in a beautiful Parisian bow.

As the film begins, Hollywood screenwriter Gil (Owen Wilson) and his pragmatic unimaginative fiancée Inez (Rachel McAdams) are tagging along on a trip to Paris with Inez’s shopaholic mother, Helen (Mimi Kennedy) and conservative executive father, John (Kurt Fuller), who has come to Paris to finalize a complex deal.

Paris triggers Gil’s memories of his one-time literary ambitions. When he was in his twenties, Gil had lived in Paris and had contemplated remaining there to write a novel. Now Gil ponders the road not taken and resurrects his youthful Paris dreams of living in Paris. He longs for the Paris of the “lost generation.”

Gil’s recent immersion is writing a novel about a man who owns a nostalgia shop. His boredom with churning out routine but lucrative screenplays makes him seem frivolous and insubstantial in his father-in-law’s eyes. John explicitly objects to Gil as husband material, and Gil’s fiancée Inez is also growing concerned, if not a bit threatened, about Gil’s novel. She rejects out of hand Gil’s wish that he and Inez move to Paris while Gil continues to write.

Gil seeks relief from the banalities of Inez, her parents and Inez’s old friend, Paul (Michael Sheen), a bombastic pseudo-intellectual professor. Now the true Inez begins to emerge. She is rude to Gil and openly rebukes him when he attempts to interrupt or disagree with her pompous Paul.

When Paul offers to take Inez dancing, Gil is happy to walk the dark streets of Paris alone. A bit drunk and lost, he ends up sitting near Rue Montagne St. Genevieve. As the bells strike midnight, a handsome 1920’s roadster full of happy partygoers pick him up. All of a sudden, Gil realizes that he is traveling with F. Scott and Zelda Fitzgerald in the glory days of 1920’s Parisian culture.

Gil disappears nightly to party with the Fitzgeralds; he meets Cole Porter and Salvador Dalí (Adrien Brody); Gil has hilarious conversations with Hemingway (Corey Stoll), who speaks like a caricature of his novels. Gil attends Gertrude Stein’s salon (Kathy Bates is perfect as Stein) who advises him on his novel. These scenes will make you want to be there right alongside Gil.

I’m still wondering why Allen chose Owen Wilson to play Gil, the character who should be the stand-in for Allen. Wilson does well in the role, don’t get me wrong, but where is the Woody Allen insecurity and angst? Wilson, with his Texas drawl, seems innocent, even wide-eyed, unburdened by life, rather than depressed and indecisive. On the other hand, it’s refreshing to see Allen step away from his formula.

The rest of the cast is first-rate, especially Rachel McAdams and Marion Cotillard. Even Carla Bruni, the former model-turned-singer who is now the wife of the president of France, Nicolas Sarkozy, carries off her small role as the guide with aplomb. Mimi Kennedy and Kurt Fuller, who play Inez’s parents, act with the perfect amount of sneer on their faces and in their voices.

Paris looks splendid through Woody Allen’s eyes and the cinematography of Darius Khondji. It’s not shot through a gauzy lens or enhanced with artificial color, but with some clouds and rain that only serve to make the city look more romantic. It’s a pleasure to watch the scenes of virtually empty tourist sites, including Monet’s Gardens at Giverny, Versailles, the Rodin Museum, the flea market at Porte de Clignancourt, Notre Dame’s garden, the book stalls along the Quai de la Tournelle and Pont Alexandre III. There are mouthwatering shots of the Grande Dame restaurants, Le Grand Véfour and La Lapérouse.

In essence, “Midnight in Paris” is about Paris and its quixotic effects on people as much as it is about Gil’s adventures and lessons. The film exposes the illusion that living one’s life in a different time and place will provide a more fulfilling life. We see several of the characters struggle with this concept of “if only,” with varied results. However, this theme doesn’t overwhelm the warm romance and comedy that defines the film.