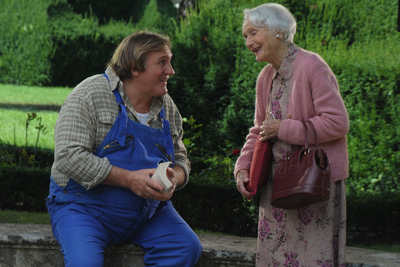 “My Afternoons With Margueritte” is a small charming film that only the French could create. Like so many French films, it explores universal concepts and issues in very intimate ways. The film follows the growing friendship between Germain, an emotionally abused practically illiterate man, (Gérard Depardieu), and Margueritte, a delicate, cultured elderly woman (Gisèle Casadesus). The two accidently meet in the small provincial village park where each has the lonely habit of feeding the pigeons.

Margueritte, who, after a government career, lives in a retirement home where she loses herself in the joys of literature. She dresses in dignified suits and high-heeled shoes and carries Camus’s “The Plague” to read in the park. Her nonjudgmental and kind manner encourages Germain to enter her life. They begin to have daily visits in the park. Margueritte reads “The Plague” to him as well as Roman Gary’s memoir “Promise at Dawn,” and Jules Supervielle’s short story “The Child of the High Seas.”

Germain, an oversized man in oversized overalls, at first seemed content to observe the behavior of the pigeons. He had already named them based on each one’s idiosyncrasies. In flashbacks, we see the child Germain being mistreated by his coarse unfeeling mother and mercilessly taunted by his teachers and fellow students. At a young age, he accepted his self-image as a slow-learning oaf. Even as his mother drinks herself to death, she rebuffs Germain’s attempts to care for her.

Margueritte and Germain’s friendship occurs at turning points in each of their lives. Margueritte’s vision is fading while her relatives stop paying for her support. Yet she is able to give Germain to the precious gifts of ideas and friendship.

When the death of Germain’s mother finally ends his abuse, he grows in self-confidence and self-awareness, and in so doing recognizes his ability to love and to be loved. When Germain finds Margueritte in an unpleasant overcrowded state facility, without hesitation, he swoops her up and takes her to live at his house. Pre-Margueritte, it would not have been possible, but near the end of the film, Germain learns that his (very) young girlfriend is pregnant … and he is thrilled.

Depardieu, who has acted in more than 120 films, in roles from Cyrano de Bergerac to Georges Fauré in “The Green Card,” displays his large talent in “My Afternoons With Margueritte.”He excels in portraying Germain’s emotional awakening and his exploration of the world of ideas. Watch his face as the film progresses. One can see growth in his ability to listen, focus and understand.

Ninety-six year old Gisèle Casadesus is simply perfect in the role of the articulate Margueritte, who retains her dignity and humor while illness and poverty overtake her. Casadesus has acted in over 40 French films, numerous plays and several television series. She remains very active, appearing in four films last year.

To appreciate fully “My Afternoons With Margueritte,” rather than thinking about it literally, try viewing it as a fable or an O’Henry morality tale — an illustration of the ways in which people suffer at the hands of their families, but are redeemed by strangers.

It is a pleasure to watch Germain and Margueritte, who, despite the vast differences in their life experiences, find love, help and solace in each other, as Margueritte awakens Germain’s intellect and Germain finds a mother figure he can love and support.

(21275)
$3.61 (as of January 25, 2021 - More infoProduct prices and availability are accurate as of the date/time indicated and are subject to change. Any price and availability information displayed on [relevant Amazon Site(s), as applicable] at the time of purchase will apply to the purchase of this product.)

$12.40 (as of January 25, 2021 - More infoProduct prices and availability are accurate as of the date/time indicated and are subject to change. Any price and availability information displayed on [relevant Amazon Site(s), as applicable] at the time of purchase will apply to the purchase of this product.)

(11185)
$8.99 (as of January 25, 2021 - More infoProduct prices and availability are accurate as of the date/time indicated and are subject to change. Any price and availability information displayed on [relevant Amazon Site(s), as applicable] at the time of purchase will apply to the purchase of this product.)
related posts