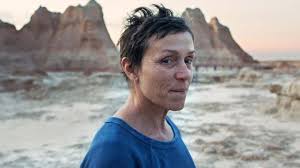 Taking to the open road—and all that implies—is an idea deeply rooted in the American psyche. The beckoning freedom of the highway; the romance of chucking it all for a life of endless adventure. There was a time when the exhortation to “Go West” conjured up infinite possibilities. And books like “On the Road” and films like “Easy Rider” helped popularize that notion. The road led somewhere; it was a means to getting someplace better.

But in Chloe Zhao’s earthy and starkly beautiful film, “Nomadland,” the American dream has been pared down to a population of wanderers living off the grid and eking out a subsistence living. Closer in spirit to the desperation of “The Grapes of Wrath” than the idealization of “On the Road,” “Nomadland” is a sobering look at the lowered expectations of many Americans as the chasm between the rich and poor widens.

The journey begins in the tiny town of Empire, Nebraska, in 2012. Fern (Frances McDormand) is packing the few remnants of her former life in a storage unit and getting ready to hit the road for good in her Ford Econline van. The gypsum mine where her late husband had worked until a few years ago has closed and the town’s remaining inhabitants have scattered like dust. Nothing remains of Empire, not even its zip code. For Fern, it’s not a lark and it’s not for fun, it’s a way to survive the harshness of life in the twenty-first century.

Her first stop is at an Amazon fulfillment center where she joins an army of seasonal migratory workers packaging holiday orders. It’s a lonely Christmas as she celebrates alone in her van, but Fern and the people she meets along the way are not broken or cynical; they are just getting on with their lives.

You might think this doesn’t sound like much fun, and to be sure it is not your average feel good Hollywood film, but nor does it look down on working people, as so many mainstream movies do. The film gives these people a decency and honorability that acknowledges who they are, and that ultimately makes their story inspiring.

McDormand’s production company developed the material and brought in Zhao on the strength of her naturalistic modern-day Western, “The Rider.” Zhao also wrote the screenplay for “Nomadland,” based on journalist Jessica Bruder’s account of her time wandering the American West among real-life nomads, and then she seamlessly put the pieces together as the film’s editor.

It would be hard to imagine another actor bringing Fern so fully to life as McDormand does here. She has always shown a willingness to dig deep into eccentric, unflattering and even grouchy characters in films like “Fargo,” “Three Billboards Outside Ebbing, Missouri” and the mini series “Olive Kitteridge.” Fern is complicated: she quotes Shakespeare and plays the flute but is emotionally guarded. The lines on McDormand’s weather-beaten face are like a roadmap of the grief and hard times Fern has experienced. But McDormand also gives her an unassailable dignity and strength. So when a friend is feeling sorry for her, Fern quickly reminds her that she is not homeless, just houseless, and, she says, that’s not the same thing.

Most of the people who befriend Fern along way are non-professional actors playing themselves, and McDormand fits right in. There’s Linda May, who, after working since she was 12-years-old and raising two daughters, couldn’t survive on the meager $550 a month from social security. Without a safety net, she took to the road in order to be self-sufficient. The longtime traveler Swankie instructs Fern in the ways of this world, and Bob Wells, organizer of an encampment for beginning nomads in the Arizona dessert, offers the philosophical unpinning for this way of life. Rather than be a workhorse that gets put out to pasture at the end of its days, Wells and his followers have happily unyoked from “the tyranny of the dollar, the tyranny of the marketplace.”

Fern goes from harvesting beets in Western Nebraska to working in the cafeteria of the tourist attraction, Wall Drugs, in South Dakota to being a seasonal host—i.e. cleaning toilets and such—at Badlands National Park. There are also small pleasures to be had along the way as she bonds with her pals at an RV show and knocks down shots of tequila in a local bar. But her most meaningful moments come from communing with nature, sometimes awe-inspiringly beautiful and sometimes foreboding.

Like the people themselves, Zhao’s direction is stripped to the bone, there is no excess, not a wasted gesture or camera movement.

Cinematographer Joshua James Richards has a slow eye for cacti framed against a desert sunset or vast snow-dusted plains. And the understated music of Italian pianist Ludovico Einaudi, reminiscent of Erik Satie, seems to organically rise out of the lonesome landscapes.

Fern does have a real family, and at one point visits her sister to borrow money to repair her van. Invited to stay on, she can’t get out of there fast enough. More complicated is a friendship that forms with Dave (David Strathairn), a fellow traveller who asks her if she wants to stay with him and his son’s family in California. In another life, it might have worked, but the feelings it brings up are too much for her; she leaves without saying goodbye.

It is not that Fern is anti-social, she is just used to solitude and prefers the company of her own thoughts. Long ago, she made a choice to check out of business as usual and replace it with something that feels more substantial, more lasting. She has found a measure of peace living as part of the eternal rhythm of nature. Indeed, there is something immutable about the ancient rocks she holds, the stars and planets she looks at in the night sky, and the lunar landscape she wanders in the Badlands where dinosaurs once roamed.

In the final shot of the film, on the rugged cliffs of the Northern California coast, Fern raises her arms above her head in exaltation, howling into the wind. Like all of us really, she is a nomad in the march of time.

(9862)
$19.99 (as of January 26, 2021 - More infoProduct prices and availability are accurate as of the date/time indicated and are subject to change. Any price and availability information displayed on [relevant Amazon Site(s), as applicable] at the time of purchase will apply to the purchase of this product.)

$2.71 (as of January 26, 2021 - More infoProduct prices and availability are accurate as of the date/time indicated and are subject to change. Any price and availability information displayed on [relevant Amazon Site(s), as applicable] at the time of purchase will apply to the purchase of this product.)

(37)
$7.99 (as of January 26, 2021 - More infoProduct prices and availability are accurate as of the date/time indicated and are subject to change. Any price and availability information displayed on [relevant Amazon Site(s), as applicable] at the time of purchase will apply to the purchase of this product.)
related posts