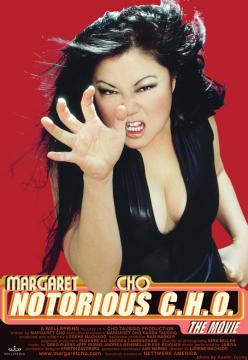 The 33-year old Margaret Cho is easily recognizable because she&#146;s not only the rare successful female stand-up comedian but is the sole (no pun intended) Korean one as well. Her act is most famous for working in a territory unoccupied by any other big-name comedian &#150; the spoofing of a stereotypical old-fashioned, narrow-minded middle class Asian mother. Cho extracts humor by setting her &#147;mom&#148; in various backdrops to reveal clashing cultural and generation gaps. Jewish comedians have long done the same thing with their mothers, but what sets Cho apart is her ability to wholly transform into her &#147;mom&#148; character, complete with glaring accent (only something an Asian comedian could now get away with or pull off successfully; sorry, Jerry Lewis).

Notorious C.H.O. is Margaret Cho&#146;s live concert film shot in Seattle during a thirty-seven city tour in early 2002. Here Cho does not mine her family for material as much as in the past. That is good because the subject was getting tired and comedians should always strive to broaden their scope. On the other hand, the family material is what she excelled at and a lot of the material here is sub-par in comparison.Born in San Francisco, the other niche Cho subsists on is gay humor, and it makes up the bulk of this act.

The movie starts off with prosaic interviews with Cho and her parents. Cho is overly solemn in glibly describing how important the support of her audience has been to her.The inclusion of her parents seems meant to say they really aren&#146;t quite the caricatures Cho makes them out to be in her act. That comes as no surprise–otherwise Cho would be in a loony bin, not on stage (not that the two are completely mutually exclusive).

The movie ends with another misstep as fans are interviewed about the show.Of course all of them rave about it and about Cho. It has the appearance of one of those movie trailers in which people filing out of a theater are asked about it and they say, &#147;Go see it!&#148; It is redundant when these scenes are in the movie itself except as an attempt at retroactive bandwagon propaganda.Most of the movie cruises along well enough to earn amused smirks and occasionally elicit the big laugh. Of course, Notorious C.H.O. is a must for Cho fans as it blatantly panders to her core audience. Everyone else will have to fend for themselves.