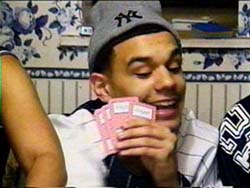 Urban Sanctuaries: Neighborhood Organizations in the Lives and Futures of Inner-City Youth

Brett Morgen and Nanette Burstein’s documentary On The Ropes takes us behind the scenes and into the lives of three young boxers who train in a Beford-Stuyvesant boxing gym. Each of the three has a story to tell. Noel Santiago, George Walton, and Tyrene Manson are each trying to fight their way out of difficult lives against almost insuperable odds, using the only legal means they see available to them – boxing.

The story is told through one man’s eyes, Harry Keitt, the trainer at the gym who has known Noel, George and Tyrene for years. As Harry says, "With these kids it’s either sell drugs, go to school, or go to prison." Boxing isn’t an easy road, and it’s not pretty, but it does represent a thin ray of hope.

Do not expect a sunny moral at the end of On The Ropes. It’s a dog-eat-dog world, as the best boxer of the three, George Walton discovers. After his victory in the 1996 Golden Gloves tournament in Madison Square Garden, Walton becomes hot property. He is wooed by bigger-time, bigger-name people than Harry Keitt. So he fires Harry and heads for the bright lights of Las Vegas. But things don’t quite work out, and as George’s star dims, he finds his way back to the Brooklyn gym, begging Harry for a place to work out.

Tyrene’s story is grimmer. A young girl desperately trying to succeed in the ring, she is overcome by the life she is forced to lead. One of many people living in a small, chaotic home headed by her crackhead uncle, she is an accident waiting to happen. When the uncle sells crack to an undercover cop, the police raid their small house and Tyrene is busted for possession with the intent to sell. Although she swears innocence and pleads for her chance to compete in the Golden Gloves Tournament of 1997, for which she has been working and training, she is forced to stand trial on the very night the tournament begins. Worse, she is found guilty and ends up sentenced to 4 1/2 to 9 years in prison. Through the trial we observe first-hand the cruelty of the legal system – an obviously uncaring and incompetent legal aid attorney, and a judge in a hurry to convict despite the lack of any hard evidence of Tyrene’s guilt. She never has a chance.

Young Noel Santiago hasn’t fared as badly as Tyrene – so far. A tough talking kid, we can see he is not the warrior that both George and Tyrene are. He has little motivation to work, and is always one defeat away from packing it in. The crowning moment in his life seems to be getting a decent grade on an English test in a community college course. Meeting his once-addicted mother we see just how far Noel would have to travel to succeed in anything at all.

On The Ropes is a story of poverty in America, and of the severely restricted horizons of inner city kids. The boxing footage is very interesting – particularly when we see how hard these kids can punch, and the power and strategy behind their moves.

There is a bittersweet moment when they all get to go with George to Las Vegas for a boxing camp. Obviously never out of Brooklyn before, the young kids are dazzled and re-dazzled by the glitz of Las Vegas. You can see visions of easy living dancing before their eyes. Sadly it is also easy to see what is more likely to happen to all but the most fortunate of them. On The Ropes is how we feel when we leave the theater – wrung out and saddened by the cruel realities of their world.