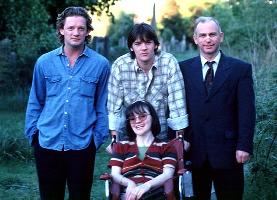 Orphans, the new film from writer-director Peter Mullan, begins with a long take of four siblings gathered around their mother&#146;s coffin on the night before her funeral. Awash in grief, and self-conscious of their behavior in front of each other, they enact a simple goodbye ceremony for the woman who bore them. A small marvel of discipline, it brings to mind the beautiful closing scene in Big Night, as the actors are required to stay in character while doing very little. Unfortunately, it&#146;s also the most interesting and heartfelt look we get at Mullan&#146;s characters, even though the film still has some 95 minutes of running time.

Orphans follows these four people as they stumble through a rainy night in Glasgow, each of them dealing with their loss in their own different ways. Thomas (Gary Lewis), whose lifelong filial dutifulness has bleached all the life out of him (even his skin looks like parchment), insists on spending the night beside his mother&#146;s body in the church. Michael (Douglas Henshall) is stabbed in a pub brawl, and tries to survive without medical care until dawn when he can fake an on-the-job injury for the workers&#146; comp. John (Stephen McCole), enraged by Michael&#146;s stabbing, passes the night looking for his brother&#146;s attacker so that he can take revenge. Sheila (Rosemarie Stevenson), who is confined to a wheelchair by cerebral palsy, is taken in by a family of Good Samaritans (and drops out of the picture for all practical purposes).

Mullan has created a wildly uneven film, both in quality and in tone. On the one hand, he&#146;s given it a Maxwell Anderson stage-play atmosphere by having a metaphorical rainstorm engulf the city during the night. On the other, he&#146;s succumbed to the cry of the youth market sirens, injecting violence and gross-out comedy where it doesn&#146;t belong. A man ejaculating into another man&#146;s face, a bartender who imprisons disfavored patrons, a darts game that uses a man&#146;s rear side as its target &#150; all this and more has been squeezed into a movie that&#146;s ostensibly about a family recovering from the death of its mother. Who knows what imp began whispering into Mullan&#146;s ear that a straight drama would be too boring, too square, for these modern times? Whatever it is, he should track it down and kill it, for it caused him to turn Orphans into a tart of a movie that&#146;s trying to please all comers.

One suspects that the siblings take their separate paths during the stormy night not because the symbolism is apt, but because Mullan knows that their conflicts aren&#146;t sharp enough to come to a point. No one in this bruised and battered tribe can ever surprise us because they&#146;re nothing but Christ figures. Suffering is their only attribute, and they&#146;re each allotted a Cross &#150; a stab wound, or a wheelchair &#150; which they drag through the entire movie. Orphans is in one sense about paralysis, but its form reflects its content in ways that ought to alarm its creator. In places it makes Long Day&#146;s Journey Into Night look like Raiders of the Lost Ark.

Orphans shows some talent, but it&#146;s neither for violence nor family drama. It does have a handful of lyric sequences that work beautifully. In one, Michael slides on a wooden pallet down a long loading ramp and into the River Clyde, where he begins washing out with the tide; in another, the storm tears the roof off the church, and the ensuing maelstrom suggests that Thomas&#146; grief has brought on the apocalypse. Both scenes are shot and edited so well that you wish Mullan had dropped all of the revenge plots and masturbating old men, and stuck with this material that actually pulls some poetry out of his characters. It&#146;s too bad that Orphans is content to be a kitchen-sink drama that&#146;s full of old dishwater.