It’s Oscar season, which means it’s time for entertainment bloggers and reporters to regurgitate timeworn tales of Sacheen Littlefeather accepting Marlon Brando’s Best Actor Oscar for “The Godfather,” that streaker running past David Niven, and the following four tired Oscar myths which your pals at Culture Vulture would officially like to retire once and for all.

Here’s a statement you’ve never heard from any football fan or sports writer: “Oh my God! The Super Bowl is so long! Can’t they eliminate the halftime show and the time outs and the field goals and just have, like, an hour of tackles and touchdowns and get it over with already?” And the reason you’ve never heard that particular statement is because the Super Bowl is an event that comes but once a year, meaning if you’re someone who actually enjoys football, then you buy snacks and beer and invite your pals over to bask in all the footbally goodness for as long as humanly possible — sometimes when your home team isn’t even playing! Now, personally, I’m not much of a sports fan, so I only glanced at the final (admittedly exciting) minutes of 2015’s Big Game, and then only because New England was involved. But I haven’t missed a minute of a single Oscar broadcast since childhood because I actually enjoy the big, dumb spectacle, not in spite of how big and dumb the spectacle is. I enjoy the unexpectedly moving speech from the sound mixer I’ve never heard of, the clips from the nominated “Best Documentary Short Subjects” I might never get a chance to see, the parade of models decked out in the work of the year’s “Best Costume” nominees…all the so-called “boring” categories producers shamefully tried to rush through one year by presenting trophies to the non-famous winners at their seats without even giving them a chance to speak. And if you don’t care about any of that stuff, then why on Earth are you watching the broadcast? “Good Morning America“ and the World Wide Web will tell you the winners and show all the highlights the very next day, and it’ll only take a few precious minutes of your time.

In the same way that some critics decry the length and dullness of the Academy Awards ceremony every year, it’s likewise standard practice to complain about the performance of the hosts. Sometimes, of course, those criticisms are more than justified (as with the notoriously chemistry-free pairing of James Franco and Anne Hathaway for 2011’s ceremony or the jaw-dropping tastelessness of Seth MacFarlane’s 2013 tittering about seeing Jodie Foster’s “boobs” during the gang rape scene in “The Accused“). But in the case of the 67th Academy Awards in 1995, David Letterman was primarily slammed for introducing irony into the proceedings, tweaking the faux gravitas of the event as if the broadcast were some kind of TV variety show or something rather than a serious celebration of cinema. He brought Tom Hanks up on stage for a stupid pet trick. He goofed on overly vowelled names like Oprah, Uma, and Keanu. And, in the same way his odd sense of humor never quite connected with the NBC executives who ousted him from “The Tonight Show” (or the Nielsen families who ranked him an also-ran behind the corny schtick of his replacement, Jay Leno, for decades thereafter), TV critics of the time labeled his performance at the Shrine Auditorium an abject failure. Letterman was never asked back, and his own self-deprecating comments about the event over the years helped to cement his reputation as one of the worst hosts ever. And yet, I distinctly remember my friends and I loving the 67th Awards more than any in memory for the very reasons most reviewers hated the broadcast. Unlike the square, safe familiarity of more “beloved” MCs from Bob Hope to Billy Crystal, Letterman brought an edgy Gen-X sensibility to the Awards while putting his own unmistakable stamp on the frequently generic ceremony. And while his influence is seldom acknowledged, he also helped to shake up the stodgy old format, paving the way for memorable, internet-busting moments like host Ellen Degeneres’s 2014 “Oscar selfie” — exactly the type of stupid human trick Letterman would have been lambasted for in 1995 when, as usual, the late night lion was simply ahead of his time. 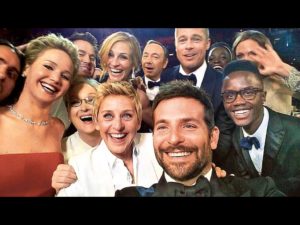 The 61st Academy Awards in 1989 notoriously opened with a long, bizarre production number featuring a squeaky voiced Snow White singing and dancing with Rob Lowe, a kick line of golden stars and, for some reason, Merv Griffin singing “I’ve Got a Lovely Bunch of Coconuts.” Like the Pee-Wee Herman/Robocop skit the year before or Bjork’s infamous swan dress at the 73rd Academy Awards in 2001, the Snow White number is frequently ridiculed as a prime example of the sort of train wreck best avoided on Hollywood’s most glamorous night. Because, yknow, the Oscars are supposed to be classy. But as a quick reminder (and a plea) to any future producers of the event, please remember: classy is all too often synonymous with ponderous, pretentious, and dull. Sure, the Snow White number was ridiculous, overlong, and inexplicable, but it was also the kind of “WTF?” moment that leads to enjoyably astonished water cooler bonding the next day (as well as subsequent repeat viewings on YouTube to ensure the whole thing wasn’t some kind of champagne-induced hallucination). The same can’t be said for the truly unwatchable Oscar moments, like the tedious trope of previous winners paying fatuous verbal tribute to the current nominees as if they’re participants in some overblown National Honor Society induction ceremony during an endless high school assembly — or my own nominee for worst Oscar moment of all time: the past winner reunion at the 75th Academy Awards in 2003, where every living actor who’d ever received a best performance trophy sat on stage while their names were somberly recited for an agonizing eleven and a half minute stretch of self-aggrandizing tedium that made me long for the sheer entertainment value of a dancing Disney dame in a sparkly Snow White dress.

If you’re familiar with the phrase “Oscar campaign,” then you’re no doubt aware that Academy Award nominations and winners aren’t determined via objective scientific analysis. Indeed, the relative worth of productions and performances are typically determined by factors ranging from popularity to politics — and such was the case in 1999, when boorish über-producer Harvey Weinstein (far more a master of the latter than the former) ruffled Hollywood’s feathers with his aggressive tactics in pursuit of that year’s unexpected Best Picture win for his film, “Shakespeare In Love,” over the odds-on favorite, “Saving Private Ryan.” Yet, whatever one thinks of Weinstein’s methodology, his production was certainly a legitimate contender for top honors given its critical and box office success (abetted in no small part by a smart, entertaining screenplay from celebrated playwright Tom Stoppard and the chemistry of a charming A-list cast). By contrast, “Ryan” — despite its “important” themes and the startling gore of its celebrated opening sequence — is basically just an old school, flag-waving genre film, complete with standard character types familiar from decades of cinematic platoons (the coward, the wisecracking Brooklyn guy, the Bible thumper, etc.). Another worthy contender? Sure, if you like that kind of thing…but it’s hard to ignore the scent of sour grapes in the subsequent narrative that “Ryan“ was unequivocally the superior film. Was “Pulp Fiction“ robbed of its Best Picture statue by “Forrest Gump?” Yes. Was “Brokeback Mountain“ robbed by “Crash?” Unquestionably. But “Shakespeare In Love” vs. “Saving Private Ryan?” That’s just a matter of opinion…which, in the end, is what the Oscars are all about.