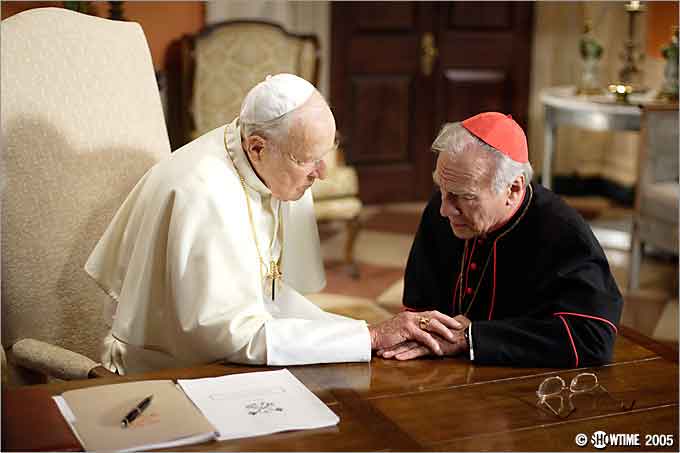 David France investigated what has become known as the pedophile priest crisis in the American Catholic Church while working for Newsweek magazine. In the book which resulted from his efforts, Our Fathers: The Secret Life of the Catholic Church in an Age of Scandal, France paints an exhaustive picture of the clandestine, even cabalistic shadow world of the Vatican hierarchy, drawing upon innumerable, irrefutable sources to reveal a decades-long-suppressed, nation-wide &#147;epidemic&#148; of the sexual molestation of young boys by &#147;chaste&#148; priests. Showtime&#146;s film adaptation draws upon the story&#146;s painful details somewhat more selectively, creating inadvertently the impression that this is a local problem in Boston, attributable primarily to a single individual, Bernard Cardinal Law.

In the film adaptation, Christopher Plummer&#146;s Cardinal Law is at once arrogant and contrite–arrogant in his power at the apex of modern-day Boston society, contrite as a humble servant of Roman Catholic ecclesiastical authority. When confronted by one of the abuse victims for an explanation of how he, Law, could have let the abuse happen for so many years, Law replies, &#147;I never understood it.&#148; As the victim provides an avalanche of personal details, demonstrating how wide and deep the cover-up had been, Law again replies, &#147;Do not turn away from Christ. He didn&#146;t fail you. I failed you.&#148;

Dispatched to Rome by the pope, Law offers to resign and thereby deflect opprobrium away from Mother church and on to himself. John Paul II tells Bernard that the Church &#147;takes no heed of bumbling public opinion.&#148; The Boston scandal is dismissed by the Vatican as &#147;a homosexual problem,&#148; exacerbated by the &#147;liberal media&#148; in America. After Law was finally driven to resign and withdraw from the Archdiocese of Boston in disgrace in late 2002, he was handily kicked upstairs to the Vatican, as archpriest of St. Mary Major Basilica, &#147;a ceremonial but highly visible post.&#148; Law&#146;s prominent visibility during the installation of the current Pope Benedict XVI served to rub salt into still gaping wounds.

Counterpoint to Law and a host of priestly bad guys, Boston attorney Mitchell Garabedian (played cocky smartly by Ted Danson) assumes the role of knight in shining armor. Garabedian represented many of the adult abuse survivors who were willing to step forward publicly, overcoming both deep personal shame as victim-survivors and societal homophobic backlash which castigated them as somehow deserving of what was done to them. They suffered, too, the self-righteous outrage of defenders of the Church for daring to impugn the Church with their &#148;filthy lies.&#148;

Even the Boston-wide scandal is collapsed in the screenplay into the signature example of lifelong abuser Father John Geoghan (Steven Shaw) and one of his victims, a fictional composite, Angelo DeFranco (Daniel Baldwin), who dared to fight back. The Vatican&#146;s homophobia is underscored with the side story of Father Dominic Spagnolia (Brian Dennehy), a vociferously outspoken critic of the Church&#146;s arrogance. The Church did not quietly shuffle Spagnolia out of sight or hearing range, but treated him as a heretic, i.e. a dangerous enemy.

Our Father is timely, well-acted, riveting drama. Fortunately, the documentation exists independent of the screenplay, in David France&#146;s well-crafted writing. It should be noted that the 1994 Canadian production The Boys of St. Vincent told the story of pedophile sex abuse among Catholic clergy in North America a decade ago, well before the more recent avalanche of accusations, cover-ups, exposure and litigation. Perhaps, with another scandal and another telling of the story, things will change. But then again, as long as the Vatican can blame American homosexuals and their allies in the &#147;liberal&#148; American media, maybe not.