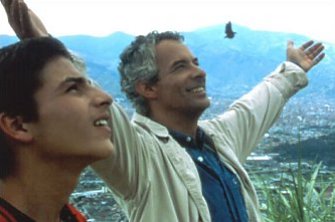 Our Lady of the Assassins is Death in Venice with 9mm Berettas, the creeping decay of a fading city replaced with casual murder in the streets of Medellin, Colombia. It’s an odd, bracing film, one of the best of Barbet Schroeder’s career.

German Jaramillo plays Fernando, an aging writer who returns to his home city to die after a lifetime in exile. Medellin is now called Metrallo, the little machine gun, after falling prey to gangs of marauding kids battling over the scraps left after the collapse of Pablo Escobar’s cocaine cartel. Returning home for succor and finding Hell instead confirms Fernando’s fashionable cynicism. He’s a nihilist playboy poseur, his world weary affectations a shtick that impresses the locals.

On his first night back, a friend presents him with Alexis (Anderson Ballesteros), as a "gift." Alexis is a gorgeous boy, maybe 17, who carries a pistol because he’s being stalked for one of the many murders he’s committed. Fernando falls hard, and the next day he’s moved Alexis into his apartment.

Fernando is titillated by the violence in Alexis’ past, and the relationship brings his own violent impulses to the surface – he’s delighted when Fernando shoots a television set, and even more so with himself when he heaves a stereo from a window. Yet just as the aggression that once fed his writing and his barbed wit is reasserting itself, the boy commits a particularly pointless murder as Fernando watches, horrified.

It’s a great moment that crystallizes the tensions of the film: Fernando sees the concrete results of his flirtation with violence only after he’s too caught up in Alexis to do anything but help the boy escape. Alexis begins a rampage – the least inconvenience or perceived slight now has him shooting, and Fernando is both disgusted by his flippant, remorseless brutality and awestruck by the life and death power he wields.

He tries to talk him out of killing, explaining that civilization requires the suppression of our impulses, and that "life would be butchery" otherwise. But butchery is the only life Alexis has ever known, and Fernando is so compromised by his own complicity (he often starts the arguments that Alexis finishes) and earlier posturing that he’s an ineffective scold.

The film is best in this section, as Fernando grapples with his conscience in situations where a misspoken word can end a life. What’s most intriguing is the sense that he’s somehow liberated by Alexis’ willingness to kill. His arguments become more and more transparent ("Killing them is a favor. Let them live: it’s what the bastards deserve.") and he eventually helps the boy find bullets. It’s a danse macabre, the man who came home to die finding the perfect means of achieving his wish.

There are a few unnerving set pieces, as when Fernando visits the blighted shack Alexis was raised in. An already grim film tips over into tragedy here, as Alexis’ five year old brother makes it all too clear that, given time, he will become just like his vicious brother.

Schroeder stages the murders impeccably. He avoids visceral kicks – no one will cheer on any of the killings in this film – but deftly juggles the editing rhythms so that the murders continue to surprise. Once it’s clear that any scene can explode into violence, a pervasive sense of dread overwhelms the film.

The film falters badly, however, when it reaches for magic realism. There’s a character named Death Boy who foretells attempts on Alexis’ life, for instance, and this intrusion of mysticism undercuts the harrowing realism of the bulk of the film. Even worse are Fernando’s prophetic dreams. It’s a terrible idea to interrupt such a compelling narrative with silly, portentous imagery. The sin is compounded when Fernando starts seeing these dreams come true.

Overwrought dream sequences aside, the film has an insistent naturalism: it was shot on video on the streets of Medellin, often in documentary conditions. This gives the film a patina of reality, a feeling (however false this may be) that this is exactly how this city looks and how these people might act.

Our Lady of the Assassins makes no pretense to being a film about the drug trade. It has more in common with meditations on death and culpability like

Last Tango in Paris or The Conformist. The Medellin of constant street violence is an arena that allows Schroeder and writer Fernando Vallejo to dramatize ideas that might otherwise seem academic. Thus there’s no sermonizing or politics, just a street-level look at the deadening consequences of drug running for the kids who must do it to survive. By focusing on something else entirely, the filmmakers were free to explore the scene rather than try to explain it. The result is, paradoxically, a far more effective film about the cartels than Traffic.