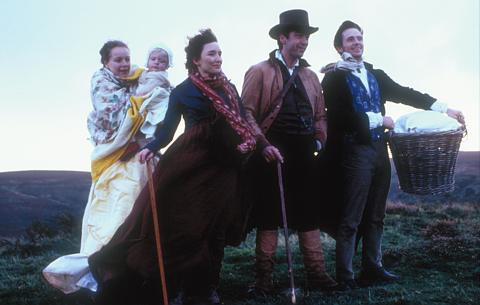 Julien Temple’s Pandaemonium opens portentously, with a closeup of opium dripping into a glass, each drop falling with a booming thud. In a film that imagines the friendship of Samuel Taylor Coleridge and William Wordsworth as a series of feverish hallucinations, this is a useful orientation: Pandaemonium is less a BBC costume drama than an attempt to recreate the hazy fog of an opium dream.

With its hyperbolic special effects, deliberate anachronisms (within minutes of the opium dripping, we get a close up of a jet streaking the sky) and cheerful disregard for historical accuracy, one could almost mistake Pandaemonium for one of Ken Russell’s dreadful early seventies biographies. It’s far better than those films – there’s nothing as awesomely tasteless as Cossima Wagner in studded leather short shorts, licking her lips and goosestepping while Gustav Mahler smashes a Star of David with a hammer – but Temple is just as willing to subordinate historical events to contemporary concerns, whatever the consequences for the reputations of his subjects.

The story begins at a party Wordsworth (John Hannah) is holding for himself in expectation of being named poet laureate. His old friend and rival Coleridge (Linus Roache) unexpectedly arrives. The great poet of his age, he’s now lost to his addiction: barely able to stand, overwhelmed by the crowd and fading in and out of lucidity.

Lord Byron (Guy Lankester) is there as well, met by a throng of swooning young women. He doesn’t hide his contempt for Wordsworth, and compounds it by loudly offering the destitute Coleridge �100 to publish his unfinished "Kubla Khan," which Coleridge is rumored to carry with him at all times.

Coleridge stumbles outdoors and finds himself caught in a vivid dream, recalling a fiery political speech he delivered decades earlier. It’s not quite a flashback. He sees himself speaking, remembers the words, then falls naturally into the scene. It’s an intriguing conceit: from this point, the story is told not as "fact" so much as the confused memories of a man in an opium stupor.

Coleridge and his friends are committed radicals, holding clandestine meetings to print their anti-slavery pamphlets while dreaming of founding a communal farm. By the time Wordsworth joins in, they’re taken seriously enough to be dogged by spies and agent provocateurs. Coleridge and his wife Sara (Samantha Morton) leave for the countryside just as the group is collapsing.

For all the talk of a rural utopia, no one is willing to join the Coleridges on the farm, and they barely survive the winter. Wordsworth eventually settles nearby with his sister Dorothy (Emily Woof) and the film slows down to focus on the complications of the next few years.

Dorothy is studiedly bohemian, out to thwart every social convention. She falls hard for Coleridge, whose addled, privileged idealism – he writes odes to his garden while his wife slops the pigs – is a perfect counterweight to her stolid, responsible brother. Wordsworth tries to join in, but he’s incapable of matching Coleridge’s poetic inspiration and too priggish to really indulge his fantasies. Sara, mired in drudgery so that the other three can be free to write and play, grows increasingly threatened and resentful.

Temple, who began his career by documenting the rise of the British punk rock scene in The Great Rock and Roll Swindle, understands the compromises and contradictions that destroy radical utopias. Pandaemonium is strongest here, the material so rich that Temple trusts the story to work without the overemphatic visuals and histrionic performances that mar the rest of the film.

Roache is hilarious in these scenes. His Coleridge is so enamored of both ideas and sensations that he can’t focus from one sentence to the next; he’s all exuberance, leaping breathlessly from notion to notion. When he finds in Dorothy someone who can not only keep up but is several surprises ahead of him, he’s not sure how to respond. Roache’s reactions to her are beautifully modulated bursts of contradictory emotions – in one brief shot he’ll register shock, delight, lust and awe, all with nothing but a look and a slight smile.

As strong as these scenes are, however, Temple can’t resist turning Wordsworth into a villain. He’s the wet blanket at the bohemian party, too ambitious to commit himself fully. As he realizes that his idyll with the Coleridges has resulted in no poetry to speak of, his reticence turns to hatred, and he starts to undermine the world they’ve created. The film lurches from quiet observation back to lurid melodrama, and Temple begins to play fast and loose with the facts.

It’s one thing to claim that William and Dorothy slept together – scholars have speculated about the possibility for years. It’s quite another to ignore the fact that both men, not just Wordsworth, traded in their youthful idealism for conservative politics as they grow older, particularly when it serves as a crude means of deifying the one while slandering the other. By the time we return to the opening party for a bout of skullduggery about the state of "Kubla Khan," shouted recriminations and risible political accusations, the film has leapt the rails completely. It’s too bad: buried in the mess is a modest, thoughtful film about the fragility of friendship.