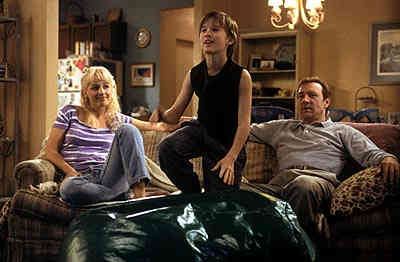 On paper, Pay It Forward displays an impressive roster: Oscar-winning actors Kevin Spacey and Helen Hunt along with Oscar nominee Haley Joel Osment and other notable talents. But assembling a collection of high-priced free agents is of little value unless a franchise has a clear goal and the team is well coached in support of a cohesive game plan. Just as Gene Autry’s spending millions for expensive but ultimately mismatched players never resulted in the California Angels winning a title of any consequence, Pay It Forward is an equally frustrating patchwork: skilled individual performers laboring futilely in service of a weak and embarrassingly manipulative script.

Trevor McKinney (Osment) is a bright and humane 11-year-old stuck in a hardscrabble area of Las Vegas and a dysfunctional family. His mom Arlene (Hunt) is an alcoholic whose two jobs leave her little time for a life beyond her drinking, and his abusive dad (Jon Bon Jovi) is rarely around. So Trevor is intrigued when his seventh grade social studies teacher Eugene Simonet (Spacey) gives his class an extra credit assignment: look at the world around you, come up with a way to change it, and put your plan into action. In Simonet, Trevor finds hope. He’s inspired to devise a plan he calls "Pay It Forward" &#150; doing favors for others before they do something for you. His idea has three major elements:

Trevor’s first act of selfless benevolence is to invite a homeless junkie in for breakfast, but that only earns his mother’s scorn. His next attempt is to serve as matchmaker between his mother and teacher. It’s a tough challenge, for Eugene is saddled with severe facial scarring and an obsessive-compulsive personality. His life is perfect order, even to the point of restricting himself from new experiences – his idea of daring is wearing a slightly different style of checked shirt. The classroom is his sole source of satisfaction and has been for twelve years. And while he challenges his students that "the realm of possibility exists within each of you", he’s never followed his own advice.

In her previous feature Deep Impact, director Mimi Leder transformed what could have been a pedestrian sci-fi potboiler into a film of surprising emotional depth. Here she’s taken a promising premise that carried a definite risk of slipping into schmaltz and given it a heavy-handed shove over the edge into daytime TV territory. Nothing in the film is allowed to merely occur, as everything is tarred with Leder’s poignant brush. Leslie Dixon’s screenplay (adapted from Catherine Ryan Hyde’s novel) is loaded with unsubtle Big Scenes and Oscar Soliloquies but most don&#146;t serve the plot, they approach with loud fanfare only to collapse under their own weight. The net effect is a series of sentimental tableaus with little connection other than Leder’s apparent desire to aid handkerchief sales. Oddly, Thomas Newman’s soundtrack is so similar to his previous work for American Beauty that, combined with the presence of Spacey, the resemblance almost makes one wonder at times what Lester Burnham is doing teaching in a Las Vegas junior high.

All three of the acting leads labor mightily but deserve better than the script they’re shackled with. As Arlene, Hunt takes her single mom character from As Good As It Gets into Erin Brockovich territory, with raccoon-like eye makeup and push-up bras. While her performance is good, she suffers in contrast with Spacey. He’s always such an efficient actor, and Simonet’s facial scarring forces him to be even more so. Here his eyes truly are the windows to his soul, carrying the emotive burden his deadened face is unable to bear. Unfortunately, Spacey’s economical approach makes Hunt’s arsenal of eye tics and head cocks look almost like an epileptic fit. As he showed in The Sixth Sense, Osment is once again natural and unaffected, but here he’s mostly asked to issue important pronouncements and stare – a towheaded Yoda.

Warner Brothers has asked reviewers to not reveal the ending of the film, ostensibly to preserve its dramatic impact. But like the rest of the film the conclusion is false and manipulative, with a final shot that’s been brazenly plagiarized. Pay it Forward stretches to be significant but instead only succeeds in being a very large platter of modern day Capra-corn. Take the film at its word and suggest to three of your friends that they avoid it.