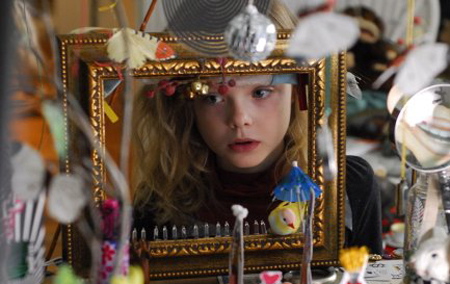 Written and Directed by Daniel Barnz

If it amounts to little else, Phoebe in Wonderland at the very least showcases the enormous talent of its young star, Elle Fanning, the ten-year-old sister of Dakota. This wisp of a girl can act like nobody’s business, and it is her remarkable ability that carries an otherwise artistic mess of a movie.

Miss Fanning plays the titular Phoebe, a young girl who we find out early on is “different,” although we’re not quite sure exactly how, or even why. That is understandable enough at the film’s beginning, when the audience is willing to be taken just about anywhere, but soon enough we begin to think that many of the places we are being taken don’t lead us to anywhere in particular. And even though we get a neatly packaged diagnosis of Phoebe’s malady slapped on at the end of the film, it still doesn’t explain much, and such labeling is especially annoying since the film has led us to believe that that kind of compartmentalizing of “difference” could even be harmful to a child’s spirit. Oh well. That’s only a fraction of what is exasperating about Phoebe in Wonderland. The film seems to be constantly offering us a glimpse of something original, and then suddenly turning into a cliché-ridden Lifetime movie channel clone.

It’s a shame, because the sparks of brilliance are really wonderful. Besides Fanning’s performance, there’s Felicity Huffman as her mother, feeling helpless in the face of Phoebe’s more extreme self-mutilating behavior, and wondering if it’s due to her own failure as a mother. There’s a great scene where Huffman lets out a tirade of disappointments to her husband, and she shamefully divulges the conflicting passions of a woman who finds the role of motherhood both fulfilling and, in darker moments, a boring task that she has little tolerance for. We may find the writer’s block that keeps Phoebe’s mother edgy and discontent a little jejune, but this very potent confession of her complicated feelings towards her daughters, both Phoebe and the younger Olivia but especially the difficult Phoebe, is where the film gets it right.

There are other fine moments. Phoebe in Wonderland has an element of dark humor to it, a tendency towards parody and exaggeration that reminds us of the absurd imaginings of its obvious progenitor, Lewis Carroll’s fabulist tales of a young girl named Alice. The fastidious principal (Campbell Scott, in a brilliantly underplayed comic performance) can barely finish a sentence, a hilarious dysfunction that stems from his fear of the intimacy of speech, and the messiness of verbal communication. Patricia Clarkson as Phoebe’s drama teacher Miss Dodger (as in Artful) brings a charming gothic mystery to her role as the catalyst between Phoebe’s fantasy world and the real one. Miss Dodger has the aura of a ghost, or a witch, and Miss Clarkson has a grand time of it playing the eccentric teacher with a deadpan, otherworldly quality.

Miss Dodger is the one person who seems to understand Phoebe’s “difference,” and she allows Phoebe to channel that difference into the play the school is putting on about—you guessed it—Alice in Wonderland. Here, too, we get to see Elle Fanning not only play Phoebe, but also play Alice, and she is no less remarkable in that part.

It’s never made clear whether Phoebe’s natural talent at acting has anything to do with her malady—this is one of the many ways in which the film is confusing—but the juxtaposition of these two qualities does make her seem special, as though “different” meant “gifted.” It doesn’t help that the other kids in the production are shown as real clunkers (the “horrible normals,” as Miss Dodger later calls them). The only other exception is the one boy who befriends her; he is also “different,” which we later understand to mean gay. Somehow I get the feeling that writer/director Daniel Barnz is trying to tell us something. It’s all part of that “love who you are, accept yourself, embrace your difference” psycho-babble, that whole “free to be, you and me” message that we all keep having to learn over and over again.

At the movie’s end, after Miss Dodger has been abruptly and unceremoniously let go in a stilted dramatic twist, Phoebe takes over the production and leads the other cast members in a heretofore unpredicted song and dance number that reeks heavily of High School Musical, or even more appropriate, Annie. It’s all very upbeat and crowd-pleasing, but it still rings false. It’s a little too happy, happy, joy, joy, for this otherwise dark tale, and the trademark Lifetime Channel’s pretty bow at the end seems, in this critic’s modest opinion, a clunky, ill-thought choice. Still, we are mesmerized by Miss Fanning’s steady gaze at the camera and her air of profound self-awareness as she performs this syrupy number. There’s no silly Andrea McArdle grin on her face. And she can sing, too.