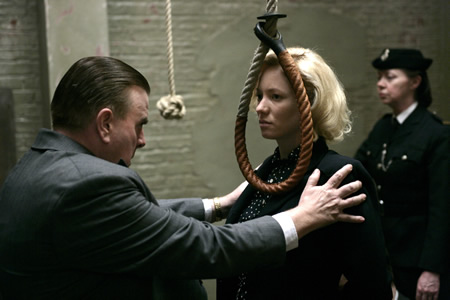 As my eleventh grade English class worked our way through Hemingway short stories, we asked our teacher how Hemingway could possibly have intended to embed all of the significance that we were finding in that terse, muscular prose. And could Shakespeare have possibly seen the infinite depths of beauty and meaning that we found in his tragedies? Our teacher insisted that those were bogus questions. A text stood on its own, and the author was to be given credit for it, regardless of their intentions. Pace writer Jeff Pope and director Adrian Shergold. Based on their press materials, they think they have made a film damning capital punishment and exploring Britain’s most famous executioner. In fact, they haven’t. But they have made a film of artistic beauty and endless fascination.

Between 1932 and 1956 Albert Pierrepoint hung somewhere between 450 and 700 people; no one knows the exact number. Those he hung were kept in a room next to the gallows. On one occasion he took less than eight seconds from the moment he walked into the room to the moment that he sprung the trap door. He hung some who were later declared to be innocent. Others included a half dozen American soldiers convicted of rape and/or murder during World War II. And after the War, he hung perhaps 200 Nazis, including the "butchers of Bergen-Belsen" concentration camp- the women individually and the men two at a time, including thirteen in one day. He even hung a casual friend who had murdered an ex-girl friend. He was a celebrity throughout his adult life, beloved when capital punishment was popular and reviled when public opinion turned against it. Ultimately, he argued against capital punishment on the grounds that it was not a deterrent to crime. After retiring he wrote books, was interviewed on the BBC (http://www.bbc.co.uk/liverpool/realmedia/features/pierrepoint.ram) and died with a clear conscience at eight-seven in 1992.

In "Pierrepoint- The Last Hangman," a fictionalized account of his life, we meet Pierrepoint as he is first being hired as an assistant hangman. That he chose this profession comes as no surprise; both his father and his uncle plied the same trade. Having lost his father at seventeen, his uncle took the boy under his wing and taught him the art of the thing. And there certainly was an art to it. As we all know from recent hangings in Iraq (including Saddam Hussein’s), doing it well is neither easy nor obvious. And no one did it better than Pierrepoint. He was efficient and professional, treated all the condemned with courtesy and respect, and made certain that their deaths were instantaneous and pain-free (in marked contrast to a host of recent lethal injections in American prisons). We spend ninety minutes with Pierrepoint and see numerous hangings, though none are depicted gruesomely or gratuitously.

Two obvious questions present themselves. Who really was this man, born to be a hangman, who became most famous executioner in British history? And what do we think about capital punishment after viewing a film suffused with the issue? On the first question, we are given no deep understanding of Pierrepoint. The film never explores what it might have been like to grow up with your two closest adult male role models as executioners. By not showing any of his childhood, we never see what cultural attitudes about crime and punishment may have shaped young Albert. The film begins when his career begins, with his inheritance of this occupation as a given. We are introduced to a fully formed character who seems devoid of emotional involvement or reaction to his work. He is neither proud nor ashamed of it. He does not see it as linked to justice or socially utility. What he cares about is the execution process, and here lies tremendous nobility in how he conducts himself. His treatment of those about to die, and then their corpses, exemplifies professional ethics and human decency. He takes no pleasure and feels no guilt in hanging people. But he is proud of the standards to which he adheres.

This might be an interesting, opaque portrait of a doctor, a lawyer, or a teacher. But it feels maddeningly insufficient in understanding someone who ends human life on a regular basis. Even if he himself denies having strong thoughts or feelings about his work, it seems incumbent on those who have made a biographical film to suggest some mechanism for making sense of him. And that lack of argument, analysis, or interpretive framework is equally missing on the issue of capital punishment.

Filmmakers have used a host of ploys for showing the wrongness of the state taking human life. We have seen innocent people executed, and the death penalty applied unfairly based on class and gender- the wealthy and women being much less likely to face it. We have been exposed to the humanity of death row inmates and felt that whatever their crime, they did not deserve to die. We have seen those who became truly rehabilitated during their years of appeals. We have been shown barbaric, botched executions. We even have met the relatives of victims who chose forgiveness over revenge. Good, bad, and indifferent films have used all of these techniques. The best film about capital punishment (Dead Man Walking) eschewed the conventional arguments, never let us lose sight of the victims and their families, and still managed to make an appeal rooted in an irreducibly spiritual and humanistic belief in the sanctity of all human life.

But "Pierrepoint- the Last Hangman" does none of that. It is never revealed that he has executed people who are later declared innocent. We only come to know one person who is hanged, and his death is used not as testimony to the moral bankruptcy of taking life, but rather as a painful moment for Pierrepoint. We never see the social selectivity of who is sent to the hangman. And though I am personally opposed to the death penalty, after hearing about the exploits of the masters of Bergen-Belsen, I enjoyed seeing these monstrous Nazis hang. The film indicates how in the 1950’s the public began turning against the death penalty, but we never learn what lead to this change in attitudes. The only aspect of the film that argues against capital punishment is that in seeing so many people hang, it feels depressing…..sort of capital punishment as a downer.

Yet the film is completely engrossing. Partly it works so well because director Shergold and Cinematographer Cohen have beautifully captured small town, middle class British life in the decades before and after World War II. The look and texture of the portrayal feels spot on. Partly it works so well because of the relationship at its center. Pierrepoint married a strong, smart, faithful, and nurturing companion in Anne (Juliet Stevenson- Bend it Like Beckham, Being Julia). For years he never told her what he did to supplement his income as a grocer, and though she figured it out, she waited for him to tell her. When it was finally acknowledged, she enjoyed his subsequent celebrity, nurtured him when the public mood changed, and helped him leave the profession at a relatively young age so that he could enjoy a long retirement. This childless marriage is what Victorians used to call companionate. There is little of the erotic and few heart-to-heart encounters. But there’s a bedrock of unspoken understanding, mutual respect, and abiding affection.

And of course there’s Pierrepoint himself. Though he’s impossible to fathom, or even get much of a handle on, Timothy Spall (Secrets and Lies, Nicholas Nickleby) is mesmerizing. He plays Pierrepoint as someone fated to his profession and more than welcoming of that. He insists in the film (as he did in real life, up to his death) that he has no regrets, no second thoughts, no misgivings about his career. Are we supposed to take this at face value? Is he whistling in the dark? At one contrived moment he confesses to the toll it takes to execute hundreds. But the bulk of his performance is more subtle than that. As with Hemingway and Shakespeare, this character is rich enough to absorb all manner of interpretation. So, what we have is a film that never proffers a way to understand its protagonist and is a feeble criticism of capital punishment. But, it remains a stunning and fascinating experience. Heeding the advice of my English teacher, we can let go of the intentions of the filmmakers, and simply let the work stand on its own beautifully crafted and compelling legs.