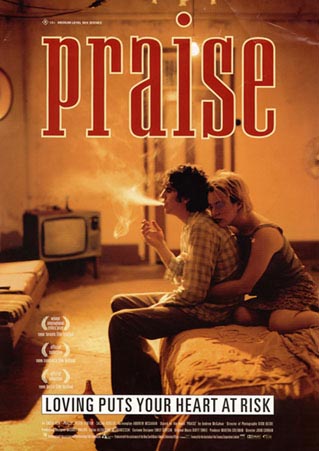 Bali Silver Accents with Garnet and

Praise takes place in an anonymous corner of Brisbane, Australia. The main setting is a flophouse whose wrought-iron balconies suggest New Orleans, and whose inhabitants are the spiritual kin of the shadows that haunted O&#146;Neill&#146;s The Iceman Cometh. One boarder stands out among the frail old men who gather together at night in their boxing shorts and engage their wizened bodies in arm wrestling contests. Gordon (Peter Fenton, lead singer of the Australian band Crow), a younger man (he&#146;s in his mid twenties), is so completely shut off from the world out that even his fellow lodgers can&#146;t understand him. A lanky, mopey, nearly friendless fellow, he&#146;s devoid of ambition and refuses to keep a job. He passes his days chain-smoking hand-rolled cigarettes despite the asthma that occasionally robs him of his breath, and getting drunk when he can afford the booze.

A phone call from a former co-worker at a pub at first seems a hopeful sign for Gordon&#151;a woman might be just the thing to pull him out of his slow decline. Cynthia (Sacha Horler) sets off alarms when she appears, a crude, overweight near-nymphomaniac with a taste for alcohol as acute as Gordon&#146;s. She courts Gordon by waiting until the idea of sex won&#146;t scare him out of his wits before she initiates it between them, and at this point the movie lulls us off-guard with the old romantic notion that lovers, given a chance, can bring out the best in each other.

But though Cynthia may be the type of woman who&#146;s invisible in the outside world, her noisy psyche makes her all-encompassing, omnivorous, within the narrowed confines of Gordon&#146;s life. Her unquenchable sexual appetite makes her even more crazed because Gordon, a premature ejaculator, keeps coming before she has a chance to. The eczema that crosshatches her body (makeup barely covers her facial welts) is both an eyesore and an irritant, and after sex she makes Gordon scratch the sores on her back, carefully so as not to draw blood. When Gordon, at first slowly and then with more vigor, begins recoiling from these demands, Cynthia ups the emotional ante. The bargaining and wheedling that flows from the power imbalance begins to overwhelm Gordon, until his asthma becomes something more than a physical ailment&#151;he literally can&#146;t breathe with Cynthia around.

Praise is a study in the couple&#146;s uncontrollable, mismatched drives, and shows how they serve as emotional cement for one of the partners while exhausting (and terrifying) the other. There&#146;s an awful kind of comedy in stories like Gordon&#146;s and Cynthia&#146;s, and the filmmakers recognize this without exploiting it. When Cynthia rips her clothes off her melon-shaped, scab-ridden body, and huffs, "When are you going to fuck me?", Gordon doesn&#146;t grimace for our benefit. He simply fucks her.

Producer Martha Coleman made it her mission to bring Andrew McGahan&#146;s novel to the screen after she read it eight years ago (McGahan also wrote the screenplay), and director John Curran has almost certainly fulfilled her vision. The movie absolutely reeks of integrity&#151;not a single note feels sanitized or truncated&#151;but it&#146;s hard to understand what Coleman found so compelling in this minimalist fable to begin with. When we meet Gordon and Cynthia, they&#146;re already so close to the bottom, with such little wiggle-room left before the couple&#146;s inevitable implosion, that the story&#146;s emotional palette can&#146;t contain more than a few shades.

Yet Praise has one compelling reason to see it: Sacha Horler. Horler&#146;s whoring, bawling, insatiable Cynthia has the same abrasiveness and immediacy as Crissy Rock&#146;s self-destructive single mother in Ken Loach&#146;s Ladybird, Ladybird, but with fewer actorly flourishes. Horler has scaled Cynthia to the rest of the movie (the focus is almost always on Gordon), so that using "monumental" or any other hyperbole to describe her performance would violate its selfless spirit.

Praise&#146;s target may be the head of a pin, but the movie hits it dead-on. It&#146;s a rarity in that it doesn&#146;t invite you to identify with its characters, yet your sympathy for them never flags. And it&#146;s a hell of a calling card: it will be very be interesting to see what Curran, and especially Horler, have planned for us next.