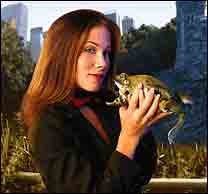 Screenwriter Doug Palau (The Agency, ER) and director Allan Arkush (Bull, The Temptations) have pulled a rabbit out of a hat with Prince Charming, a sweet and droll spoof of the old fairy tale. The concept alone is enough to engender anticipatory dread, but some clever writing and CGI along with a sterling cast overcome any initial qualms and, indeed, they’ve come up with a fluffy, but irresistible divertissement.

The prince, John (Sean Maguire, suitably toothsome), is initially encountered in the medieval kingdom of Anwyn where his apparently boundless id expresses itself on every passing wench. His misbehavior gets him in trouble with his incipient father-in-law, the king of a neighboring country, and both he and his loyal indentured servant (and failed wizard), Rodney (Martin Short), are "frogged"–sentenced to be turned into warty amphibians forever. Only the kiss and troth of a maiden can convert them back to human form.

So far, aside from heaving bosoms, things have not strayed very far from the Disneyesque. Now the leap of imagination–Prince John and Rodney find themselves (as extremely well-executed CGI frogs) in modern day New York City. In Central Park, they encounter an actress, Margo (Bernadette Peters), in the midst of an argument with her philandering Irish lover, Hamish (Billy Connolly). Margo delivers the kiss to Frog John that converts him (and Rodney) back to human form, but it will only last if John can convince Margo to marry him by the next full moon.

Margo is the star of a theater group performing in the parkand John quickly lands a role in Romeo and Juliet, all this allowing for some amusing byplay with the genuine Elizabethan prince playing in a Shakespearean drama. For Rodney, romance buds with the wardrobe mistress, Serena (Andrea Martin). Then John falls, not for Margo, but for Kate (Christina Applegate), a hansom cab driver, which provides further complications in overcoming the curse and bringing the entire affair to the required happy ending.

That’s the somewhat outlandish premise, butall disbelief is suspended early on. It is, after all, a fairy tale. What makes it fun are some genuine characterizations, fleshed out by skillful performances. Peters (Let It Snow, Sunday In The Park With George) is in her comedic element as the egotistical 40ish star, worrying about her age and the competition of an ingenue. Maguire (Waterland) stays consistently within the role of the randy and romantic prince, playing especially well on the contrasts between the medieval and the modern, and delivering his flowery prose with panache. Short (Father Of The Bride, Jungle 2 Jungle) and Martin (Hedwig And The Angry Inch, My Big FatGreek Wedding) find delightful chemistry between them as well as appropriate comical skills. Applegate (The Sweetest Thing, View From The Top) plays it charmingly straight as the one who wins John’s heart.

Small touches add to the fun throughout the film, such as the shopping expedition to get modern clothes for John at an Old Navy sort of store, rock music playing, and a headset-wearing salesgirl picking out the coolest current attire. Elizabethan table manners don’t sit well in a contemporary restaurant, nor does Elizabethan boiled beef do a lot for Margo’s appetite in another scene.

Together, the writing and the direction of Prince Charming balance the silliness and the romance so that each reinforces the other, resulting in a frothy frappe of summer entertainment.